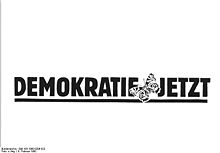 Democracy Now (German: Demokratie Jetzt) was a political movement in East Germany founded in the wake of the collapse of Communism that wished to maintain a human, democratic version of socialism in opposition to what they saw as "western consumer society". In 1990 they joined Alliance 90 with New Forum and the Initiative for Peace and Human Rights.