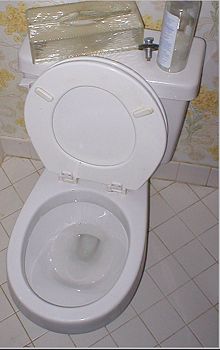 In young boys, one of the most common causes of genital injury is when the toilet seat falls down while using the toilet.[1] Smaller children run the risk of drowning if they fall headfirst into the toilet. Injuries to adults include bruised buttocks, tail bones, and dislocated hips from unsuspectingly sitting on the toilet bowl rim due the seat being up or loose. Other injuries can be caused after slipping when standing on the toilet, or if the toilet itself collapses under the weight of the user. Pinch injuries can also occur due to splits in plastic seats, and splinters from wooden seats. Older high flush cast iron cisterns have been known to detach from the wall when flushed (by pulling a chain) causing injuries to the user. The 2000 Ig Nobel Prize in Public Health was awarded to three physicians from the Glasgow Western Infirmary for a 1993 case report on wounds sustained to the buttocks by collapsing toilets.[2] Furthermore, injuries are frequently sustained by people standing on toilet seats to reach a height. There are also instances of people slipping on a wet bathroom floor, or from a bath and concussing themselves on the fixture.

There are also injuries caused by animals. Some black widow spiders like to spin their web below the toilet seat because insects abound in and around it. Therefore, several persons have been bitten while using a toilet, particularly an outhouse toilet, and there is immediate pain at the bite site, though these bites are rarely fatal.[3]

It has also been reported that in some cases rats crawl up through toilet soil pipes and emerge in the toilet bowl, so that toilet users may be at risk of being bitten by a rat.[4]

Some instances of toilet-related deaths are attributed to the drop in blood pressure due to the parasympathetic nervous system during bowel movements. This effect may be magnified by existing circulatory issues. It is further possible that people succumb on the toilet to chronic constipation, because the Valsalva maneuver is often dangerously used to aid in the expulsion of feces from the rectum during a bowel movement. According to Sharon Mantik Lewis, Margaret McLean Heitkemper and Shannon Ruff Dirksen, the “Valsalva maneuver … occurs during straining to pass a hardened stool.” “If defecation is suppressed over long periods, problems can occur, such as constipation or stool impaction. Defecation can be facilitated by the Valsalva maneuver. This maneuver involves contraction of the chest muscles on a closed glottis with simultaneous contraction of the abdominal muscles.”[5] This means that people can die while "straining at stool." In chapter 8 of their Abdominal Emergencies, David Cline and Latha Stead write that "autopsy studies continue to reveal missed bowel obstruction as an unexpected cause of death".[6]

In 1945, 4 crew members died, and their submarine eventually sunk after the toilet malfunctioned and forced them to the surface. [7]

King Wenceslaus III of Bohemia was murdered by spear while sitting in the garderobe on August 4, 1306 .[8]

George II of Great Britain died on the toilet on October 25, 1760 from an aortic dissection. According to Horace Walpole's memoirs, King George "rose as usual at six, and drank his chocolate; for all his actions were invariably methodic. A quarter after seven he went into a little closet. His German valet de chambre in waiting heard a noise, and running in, found the King dead on the floor." In falling he had cut his face.[9]

Many urban legends have been reported regarding the dangers of using a toilet in a variety of situations. Several of them have been shown to be questionable. These include some cases of the presence of venomous spiders[20] (primarily due to the Australian redback spider's reputation for hiding under toilet seats[21]). In large cities like New York City, sewer rats often have mythical status regarding size and ferocity, resulting in tales involving the rodents crawling up sewer pipes to attack an unwitting occupant. Of late, stories about terrorists booby trapping the seat in order to castrate their targets have begun appearing.[22]

An urban legend with many variations recounts an "exploding" toilet. These scenarios typically include a flammable substance either accidentally or deliberately being introduced into the toilet water, and a lit match or cigarette igniting and exploding the toilet. In CSI a toilet is blown up by filling the bowl and blocking the pipe with dry ice. When the dry ice sublimated, the newly frozen water stopped the vapours from escaping, causing it to blow up. In the movie Holiday on the Buses a toilet is blown up when a lit cigarette is thrown into the pan which is filled with petrol which the characters have tried to flush away not realising it is not as dense as water.

Other common stories relate to the use of vacuums in the toilets of airplanes.[23]

Injuries and deaths related to toilets have been portrayed in film and other media on many occasions. These appear across many genres, from comedy to action movies:

Toilets have been shown as a location for incidents and have caused problems in other ways: