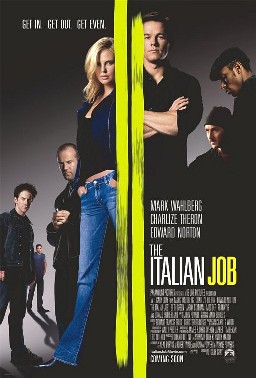 "The Italian Job" is a 2003 American directed by . The film stars , , , , , and . Based on the 1969 British film of the same name, "The Italian Job" is about a team of thieves who plan to steal gold bullion from a former associate who double crossed them. Despite the shared title, the plot and characters of this film differ significantly from those of its source material; Gray described the film as "an homage to the original." [cite web |url=http://movies.ign.com/articles/421/421750p1.html |title=Gray's Got Game |author=Spence D. |date=2003-05-30 |publisher= |accessdate=2008-10-10] Most of the film was shot on location in and . Produced by , "The Italian Job" had a successful theatrical release in the summer of 2003, and grossed over $170 million worldwide. Critical response was generally positive. A sequel has reportedly been in development since 2004, but has yet to be produced as of 2008.

In , retired safecracker John Bridger () calls his daughter Stella () and tells her that he is participating in what will be his final heist. John then meets up with Charlie Croker () before setting the heist into motion. Their team consists of themselves and four others: Steve () is the "inside man", Handsome Rob () is a getaway driver, Left Ear () is an explosives expert, and Lyle, who later demands the handle "" (), is a technical expert. The heist is a success, but Steve betrays them all by taking the gold for himself; he also kills Bridger and leaves the rest of the team for dead.

A year later back in the United States, Stella is using her safecracking expertise to break into vaults as an assistant to law enforcement personnel. The team has tracked Steve down, and Charlie recruits Stella to participate with the team in stealing the gold from Steve since she has the required skill and motivation. The team travel to , surveil Steve's house, and begin planning their heist. Meanwhile, Steve attempts to sell his gold through a money launderer, but kills him when the launderer begins asking questions about the source of the gold. However, the money launderer was a cousin of a local Ukranian gangster, who subsequently seeks vengeance for his cousin's murder.

The team's initial plan was to have Steve stood up on a date with Stella—who posed as a cable repair woman to get into Steve's house and locate his safe—while the team would break into Steve's house, load the gold into three s modified by Rob's mechanic friend Wrench (), and use hacked traffic lights to make their escape. However, Charlie is forced to call it off because of a local party, which would witness the heist's execution. To maintain her cover, Stella goes on the date with Steve, but he figures out her real identity. Charlie then confronts Steve and promises that he will take back the stolen gold.

Now aware that Charlie and his team are alive, Steve hastily makes preparations to move the gold. He obtains three armored trucks and a helicopter from which to monitor the trucks' transit. To counter the , Charlie uses his control over the Los Angeles traffic system to isolate the one truck containing the gold, which Lyle manages to find, and s the entire city. The team then steals the gold from the truck and escape in their trio of Mini Coopers. Steve and his hired security guards pursue them through Los Angeles, and the team manages to lose them all, except Steve. He follows Charlie, but falls into a tr

Screenwriting team Donna and Wayne Powers had not seen the original 1969 film prior to their commission to write a remake. The duo viewed the film only once "because [they] wanted to get a sense of what it was about" in regards to its tone, and over the course of two years they developed a screenplay which was described by director F. Gary Gray as "inspired by the original." [cite video |people=Powers, Donna (writer) et al |year2=2003 |title=Putting the Words on the Page for The Italian Job |medium=Documentary |publisher=Paramount Pictures] Gray, Powers and Powers, and executive producer James Dyer identified the most prominent similarities as the trio of Mini Coopers used by the thieves, as well as the titular heist involving the theft of gold bullion.

Most of "The Italian Job" was shot on location, at sites scouted by cinematographer Wally Pfister over 12 weeks during pre-production, but some scenes were filmed on sets. The Venice building where the film's titular, opening heist sequence takes place, the van from which the thieves surveil Frazelli's mansion, a hotel room, and the Metrolink subway tunnel were sets constructed at in California. For the scene in which an armored truck falls through and into the subway tunnel below, Pfister set up seven cameras to capture the vehicle's ~ convert|30|foot|m descent.

Gray wanted the film to be as realistic as possible; accordingly, the actors did most of their own stunts, and was used very sparingly.

Gray had been interested in working with Wahlberg since seeing his performance in "" (1997). After reading the script for "The Italian Job", Gray contacted Wahlberg, who "fell in love with it" after reading it himself.