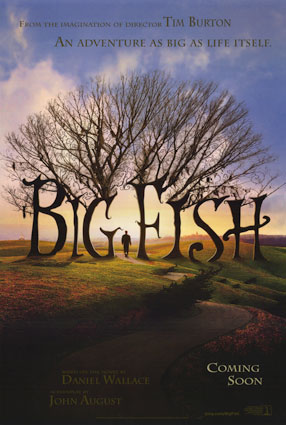 Will Bloom (Crudup) returns to his family home in , having spent the past three years not talking to his father Edward (Finney). Dying, Edward recounts his life story in his own unique, exaggerated way, full of fantastic events (portrayed in these flashbacks by McGregor). Will tries to get to know his father and find the truth, discovering that his father did lead an extraordinary life and that his storytelling was his finest achievement.

The film was initially planned to be directed by before Burton took on the project, following the death of his own father. The film was mostly shot in Alabama, and had a much less gothic tone than Burton's other films such as "" and "Sleepy Hollow". Many critics hailed the film as Burton's masterpiece, and it received four nominations and one Oscar nomination for 's original score.

At his son's wedding party, Edward Bloom tells the same tale he's told many times over the years: on the day Will was born, he was out catching an enormous uncatchable fish, using his wedding ring as bait. Will is annoyed rather than pleased by this tale-telling; he explains to his wife, Josephine, that because his father never told the straight truth on anything but insisted on embellishing it with tales, he felt that he could not trust him. He is troubled to think that he might have a similarly difficult relationship with his future children.

Will becomes a journalist in Paris, and his relationship with his father becomes so strained that they do not talk for two years. But when his father's health starts to fail, Will and his pregnant wife return to Alabama. On the plane, Will recalls his father's tale of how he braved a swamp as a child, and met a witch who showed him his death in her glass eye. With this knowledge, Edward knows there are no odds he cannot face.

Edward still has a knack for tall tales. As he tells it, he spent three years confined to a bed as a child, with his body growing incredibly fast. He became a successful sports player but found the town of Ashton too small for his ambition. Finding a kindred spirit in the misunderstood giant Karl, they set off. Edward takes an abandoned path down a supposedly haunted forest. He discovers the tiny town of Spectre, where the missing poet Norther Winslow has settled with people so friendly that no one who comes ever leaves, and comfortably walk barefoot. Edward still feels he does not want to settle anywhere yet and leaves, but promises to the young girl Jenny that he will return.

At the circus Karl signs up with Amos Calloway, and time stops as Edward sees the love of his life. As time speeds up again and he loses her, he promises to work for Amos day and night without pay to learn who she is. Every month for three years he learns something new about her, but mostly useless trivial information about her and never her name or address. Edward discovers Amos is a werewolf, and plays fetch with him, preventing him from killing Edward, and also preventing Amos' attorney from killing Amos while a wolf. In thanks for Edward's kindness, Amos tells him the girl's name is Sandra Templeton and she studies at Auburn University.

Edward learns from Sandra that she is engaged to Don Price, also from Ashton. He makes many attempts to show his love for her, including collecting all of the daffodils (her favorite flowers) from five states. Don appears and beats up Edward. Disgusted, Sandra gives up her engagement ring and falls for Edward, who, having given her his word that he wouldn't hit Don, refuses to fight back. During his recovery in the hospital, Edward is conscripted by the army, and goes to Korea. Instead of taking his assigned mission, he instead parachutes into a theater entertaining troops, steals important documents, and convinces conjoined dancers Ping and Jing to help him get back to America, where he will make them stars. The army thinks the missing Edward is dead and they tell Sandra, leaving her in grief, but Edward eventually returns, surprising her. Being legally dead means that his work choices are limited, so he becomes a traveling salesman. Meeting Winslow again, he unwittingly helps him rob a bank, which is already bankrupt. Edward suggests Winslow work on Wall Street, and Winslow later sends Edward $10,000 from his first million as his "career advisor." Edward uses it to buy his family's dream house.

Still unimpressed by his father's stories, Will demands to know the truth. Edward tries to explain that is who he is: a storyteller. While looking through Edward's old office, Will finds a suspicious letter from Spectre. Going there, Will meets an older Jenny. She explains that Spectre eventually went bankrupt, but Edward bought the entire town at an auction and rebuilt the town with financial help from many of his previous acquaintances, although it evidently decayed again. She also explains that she loved Edward, but Sandra was the only woman for him.

Coming home, Will discovers his father has had a stroke and is at the hospital. He goes to visit him there and finds him only partly conscious, and unable to speak at length. Since Edward can no longer tell stories, Will tells his father a story of his own: escaping from the hospital, they go to the river where everybody in Edward's life shows up to greet him on his last journey. Will carries his father into the river where he becomes a big fish. Although his story is clumsy compared to his father's practiced tale-telling style, it shows that for the first time Will understands why storytelling was so important to his father. Edward then peacefully remarks "The story of my life" before dying.

At his funeral, Will sees many of his father's more unusual friends, confirming at least a grain of truth from many of his tales. He sees Amos, Karl, Ping and Jing and Norther Winslow amongst others (although they are not entirely the same as in the stories, and are, in some cases, the result of a play on words. For example, the 'conjoined' twins, or 'Siamese' twins, are not conjoined, but rather, from the capital city of Thailand). When his own son is born, Will passes on his father's stories, remarking that his father became his stories, allowing him to live forever.

* as the older Edward Bloom: An ex-salesman who lives through the he tells of his remarkable life.
** as a younger Edward in fantastical flashbacks; (Perry Waltson plays Edward as a child.)
* as Sandra Bloom: Edward's wife.
** as the younger Sandra, née Templeton, whom Edward falls in love with at first sight.
* as Will Bloom: Edward's son, who struggles with separating fact from fiction in his father's constant fanciful tales.
* as Joséphine Bloom: Will's French wife, seven months pregnant with their first child.
* as Jenny: A divorced piano teacher who lives in the town of Spectre.
** plays Jenny as an eight year old when Edward first meets her.
**Bonham Carter also plays an elderly Witch who gives a young Bloom a vision of his future death.
* as Dr. Bennett: The family doctor. He delivered Will and tells him that he would choose the more "interesting" account of the day he was born as Edward lies in hospital.
* as Karl the Giant: A reclusive giant who nearly incurs mob violence in Ashton when Edward volunteers to approach and talk with him. Karl and Edward end up leaving the small town together.
* as Amos Calloway: A circus ringmaster. He gives Karl and Edward jobs, telling the latter one fact about Sandra every month in lieu of pay. He is also a .
* as Norther Winslow: A poet from Ashton who supposedly went missing, having never left the idyllic town of Spectre. After Bloom leaves, he travels the world and becomes a bank robber, before becoming a stockbroker.
*Ada Tai and Arlene Tai as Ping and Jing: from , who perform as singers for soldiers in and help Edward escape from behind enemy lines. After helping Edward they end up working with Amos
* as Don Price: A boy from Ashton who was always overshadowed by Edward's achievements. He becomes engaged to Sandra, but when he brutally beats her new would-be suitor Edward, Sandra rejects Don for Edward, who is practically a stranger to her. He later dies of a , which he had already seen in the witch's eye.
* as Beamen: The mayor of Spectre, and Jenny's father.
* as Mildred: Beamen's wife.
*Destiny Hope Cyrus as 8-year-old Ruthie.
*Daniel Wallace as Economics Teacher

Following the death of his father, screenwriter read a of the novel "Big Fish" in 1999, and had option the book on his behalf.

Burton had never been particularly close to his parents, but his father's death in October 2000 and his mother's in March 2002 affected him deeply. Following "Planet of the Apes"' production, he wanted to get back to making a smaller film. Burton enjoyed the script, feeling that it was the first unique story he was offered since "". Burton also found appeal in the story's combination of an emotional drama with exaggerated tall tales, which allowed him to tell various stories of different genres. Burton met up with Jack Nicholson, and briefly discussed using computers to allow him to play a younger version of himself. After that, Burton began the difficult process of casting two actors as the same character, which meant filming was pushed from October 2002 to January 2003.

and were cast first as the younger and older Edward Bloom respectively on August 1, 2002. [cite news|author=Stax|title=Two Big Fish Caught|publisher=|date=|url=http://uk.movies.ign.com/articles/366/366459p1.html|accessdate=2007-04-06] The combination was suggested by producers Jinks and Cohen who were working with McGregor on "", and Burton got on with him, finding him quite similar to regular colleague . Viewing Finney's performance in "Tom Jones", Burton found him similar to McGregor, and coincidentally he found a "People" article comparing the two. [cite news|author=Fred Topel|title=Tim Burton Reels in Big Fish|publisher=|date=|url=http://uk.movies.ign.com/articles/442/442609p1.html|accessdate=2007-04-06] Most of the cast were assembled by November. [cite news|author=Stax|title=More Big Fish|publisher=|date=|url=http://uk.movies.ign.com/articles/377/377481p1.html|accessdate=2007-04-06] As with Sandra's introduction, had to stand still for two minutes during her audition.

Filming on "Big Fish" began on January 13, 2003 and ended in early May. Production was based in . All of 's scenes as the elder Edward Bloom were shot first due to the emotional difficulty of his scenes. McGregor was on set from the beginning and observed Finney. Afterward, shooting took on a livelier, more enjoyable state as Burton and McGregor shot scenes of varying genre. Much of the film was improvised, most notably Edward's slippery birth scene and the humorous scene in Korea where he turns off the light as he beats up two men. During filming of the circus scenes, strong winds hit and flooded much of the sets, but filming stayed on schedule. Shooting in Alabama finished in April, and moved to for a single week before wrapping. Burton preferred to use practical special effects alongside computer animation. was employed for scenes with Karl the Giant, when he realigns Jenny's home and lifts up a car for Will and Edward to make their way through traffic. Burton also used for the first time, which lent an extra mood to the fantasy scenes. [cite news | author = Bill Desowitz | title = Burton Applies Light CG Touch to Big Fish | publisher = VFXWorld | date = | url = http://vfxworld.com/?atype=articles&id=1944&page=2 | accessdate=2007-08-19]

The "Big Fish" soundtrack was composed by regular Burton collaborator . of also contributed a song entitled "" after watching the film.