The Amazon river dolphin, alternatively Bufeo, Bufeo Colorado, Boto Cor de Rosa, Boutu, Nay, Tonina, or Pink Dolphin[2] (Inia geoffrensis), is a freshwater river dolphin endemic to the Orinoco, Amazon and Araguaia/Tocantins River systems of Brazil, Bolivia, Peru, Ecuador, Colombia and Venezuela. The species is one of a handful of oceanic and river dolphins included in a paraphyletic clade known as the botos, and is the largest of the river dolphins. Because they are unfused, the neck vertebrae of the Amazon river dolphin are able to turn 180 degrees. The pink dolphin lives in the freshwater of the Amazon River. This species looks like the grey dolphin, but individuals are bigger, and, instead of a dorsal fin, they have a hump on their back. Their tails are also bigger. The pink dolphin has been listed as endangered by the International Union for Conservation of the Nature due to pollution, overfishing, excessive boat trafficking and habitat loss. The brain of the river dolphin is 40% larger than a human brain.

The Amazon River Dolphin is found throughout the Amazon and Orinoco. It is particularly abundant in lowland rivers with extensive floodplains. During the annual rainy season these rivers flood large areas of forests and marshes along their banks. The Amazon River Dolphin specializes in hunting in these habitats, taking advantage of its unusually flexible neck and spinal cord to maneuver among the underwater tree trunks, and using its long snout to extract prey fish from hiding places in hollow logs and thickets of submerged vegetation.

When the water levels drop, the dolphins move either into the main river channels or into large lakes in the forest, and take advantage of the concentrated prey in these reduced water bodies.

In the Araguaia wetlands, Amazon River Dolphins give birth during the peak of the flood season (March–April). The young follow their parents closely for a few months, and often two adults are seen swimming with two or more small juveniles.

The species was described by Henri Marie Ducrotay de Blainville in 1817.

Rice's 1998 classification[3] lists a single species, Inia geoffrensis, in the genus Inia, with three recognized subspecies. Some older classifications, as well as some recent publications,[4] listed the boliviensis population as a separate species; however, a great majority of the scientific community, including the IUCN,[1] consider the boliviensis population to be a subspecies of Inia geoffrensis.

The three currently recognized subspecies are:

In traditional Amazon River folklore, at night, an Amazon river dolphin becomes a handsome young man who seduces girls,[5] impregnates them, and then returns to the river in the morning to become a dolphin again. This dolphin shapeshifter is called an encantado. It has been suggested that the myth arose partly because dolphin genitalia bear a resemblance to those of humans.[6] Others believe that the myth served (and still serves) as a way of hiding the incestuous relations which are quite common in some small isolated communities alongside the river.[citation needed] In the area, there are tales that it is bad luck to kill a dolphin. Legend also states that if a person makes eye contact with an Amazon river dolphin, he or she will have lifelong nightmares. Local legends also state that the dolphin is the guardian of the Amazonian manatee, and that, should one wish to find a manatee, one must first make peace with the dolphin.

Associated with these legends is the use of various fetishes such as dried eyeballs and genitalia.[6] These may or may not be accompanied by the intervention of a priest. A recent study has shown that, despite the claim of the seller and the belief of the buyers, none of these fetishes are derived from the boto. They are derived from Sotalia guianensis, are most likely harvested along the coast and the Amazon River delta, and then are traded up the Amazon River. In inland cities that are far from the coast, many if not most of the fetishes are derived from domestic animals such as sheep and pigs.[7] 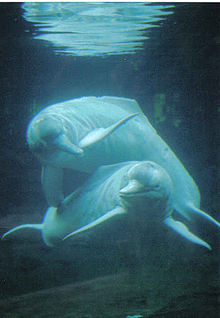 The 1987 Brazilian film Ele, o Boto is a supernatural romance featuring an Amazon river dolphin who has a son by a young woman.

The Amazon River dolphin is listed on appendix II[10] of the Convention on the Conservation of Migratory Species of Wild Animals (CMS). It is listed on Appendix II[10] as it has an unfavorable conservation status or would benefit significantly from international co-operation organized by tailored agreements.