The Dark Knight Rises is an upcoming epic superhero film. Based on the DC Comics character Batman, the film will be the third and final installment in Nolan's Batman film series, and is a sequel to Batman Begins and The Dark Knight. The film will be directed by Christopher Nolan, written by Nolan and his brother Jonathan and starring Christian Bale, Michael Caine, Gary Oldman, and Morgan Freeman as Batman/Bruce Wayne, Alfred Pennyworth, James Gordon, and Lucius Fox, respectively. The film will take place eight years after the events of The Dark Knight and will introduce the characters of Selina Kyle and Bane—portrayed by Anne Hathaway and Tom Hardy—two villains from the Batman mythology.[1]

Nolan was initially hesitant about returning to the series for a third time, but agreed to come back after developing a story with his brother and David Goyer that he felt would conclude the series on a satisfactory note. Filming has taken place across the world, including locations in India, London, Glasgow, Los Angeles, New York, Newark, and Pittsburgh. Nolan is utilizing IMAX cameras for more of the filming to optimize the quality of the picture. As with The Dark Knight, viral marketing campaigns began early during production to help promote the upcoming film. The Dark Knight Rises is scheduled for release in the United Kingdom, United States, and Canada on July 20, 2012, by Warner Bros.[2][3]

Following the death of District Attorney Harvey Dent, Batman assumes responsibility for Dent's crimes in order to protect his reputation and is subsequently hunted by the Gotham City Police Department. Eight years after the events of The Dark Knight, Batman must return to face the villain Bane, who seeks to destroy Gotham, and discover the truth regarding the "enigmatic Selina Kyle".[4][5]

"He's brutal. Brutal. He's a big dude who's incredibly clinical, in the fact that he has a result-based and oriented fighting style. It's not about fighting. It's about carnage. The style is heavy-handed, heavy-footed, it's nasty. Anything from small-joint manipulation to crushing skulls, crushing rib cages, stamping on shins and knees and necks and collarbones and snapping heads off and tearing his fists through chests, ripping out spinal columns. He is a terrorist in mentality as well as brutal action."

Aaron Eckhart had expressed enthusiasm to return for a sequel if asked, although he later stated Nolan verified that his character, Harvey Dent, is dead.[18] Cillian Murphy, who played the villain Dr. Jonathan Crane/Scarecrow in the preceding films, was reportedly sighted on set during filming.[19] Other cast members include Nestor Carbonell reprising his role as Mayor Anthony Garcia,[20] Juno Temple as a "street-smart Gotham girl",[21] Matthew Modine as Nixon,[22] Brett Cullen as a judge,[23] Chris Ellis as a priest,[23] Alon Abutbul as "a mad scientist",[24] and Rob Brown,[25] Tom Conti, Joey King,[22] and Christopher Judge in unspecified roles.[13]

Several members of the Pittsburgh Steelers will make cameo appearances as members of the fictional Gotham Rogues football team in the film, including Ben Roethlisberger, Hines Ward, Troy Polamalu, Willie Colon, Maurkice Pouncey, Mike Wallace, Heath Miller, Aaron Smith, Ryan Clark, James Farrior, LaMarr Woodley, and Casey Hampton,[26][27] and former Steelers head coach Bill Cowher as the head coach of the Rogues.[28] In 2008, the Rooney family sold a minority stake in the team to Thomas Tull, the CEO and president of Legendary Pictures, which is producing The Dark Knight Rises.[29]

"Without getting into specifics, the key thing that makes the third film a great possibility for us is that we want to finish our story. And in viewing it as the finishing of a story rather than infinitely blowing up the balloon and expanding the story [...] I'm very excited about the end of the film, the conclusion, and what we've done with the characters. My brother has come up with some pretty exciting stuff. Unlike the comics, these things don't go on forever in film and viewing it as a story with an end is useful. Viewing it as an ending, that sets you very much on the right track about the appropriate conclusion and the essence of what tale we're telling. And it hearkens back to that priority of trying to find the reality in these fantastic stories."

Christopher Nolan, confirming his involvement in The Dark Knight Rises.[30]

Warner Bros. president of production Jeff Robinov had hoped a third film would be released in 2011 or 2012.[31] Nolan wanted the story for the third installment to keep him emotionally invested. "On a more superficial level, I have to ask the question," he reasoned, "how many good third movies in a franchise can people name?"[32] He returned out of finding a necessary way to continue the story, but feared midway through filming he would find a sequel redundant.[33] By December 2008, Nolan completed a rough story outline, before he committed himself to Inception.[34] Later in December, Alan F. Horn confirmed that while discussions with Nolan about a third film were ongoing, no casting had been done, and Horn denied all such rumors.[35] Before Nolan confirmed his involvement, Oldman had said he was confident Nolan would return.[36] It was not until February 9, 2010 that it was announced Nolan had "cracked" the story of a sequel to The Dark Knight and was committed to return to the project.[37] Shortly afterward, it was announced David S. Goyer and Jonathan Nolan were working on a screenplay.[38] Goyer would leave the project during pre-production to begin work on Man of Steel; Jonathan continued writing the script based on the story by his brother Chris and Goyer.[7]

Nolan confirmed the Joker would not return in the third film, and dismissed rumors that he considered using unused footage of Heath Ledger from The Dark Knight.[39] The Dark Knight Rises will reunite Nolan with many of his past collaborators, such as Cinematographer Wally Pfister, production designer Nathan Crowley, editor Lee Smith, costume designer Lindy Hemming, special effects supervisors Paul Franklin and Chris Corbould, and composer Hans Zimmer.[40] 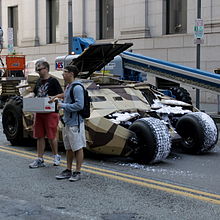 The tumbler on the set of The Dark Knight Rises in Pittsburgh.

The film has an estimated budget of $250 million.[41] Nolan has elected not to film in 3-D, but has instead stated that he intends to focus on improving image quality and scale using the IMAX format.[42] Nolan has had several meetings with IMAX Vice-President David Keighley to work on the logistics of projecting films in digital IMAX venues.[43] The Dark Knight Rises will feature more scenes shot in IMAX than The Dark Knight.[43] Wally Pfister had expressed interest in shooting the film entirely in IMAX,[44] but because of the considerable noise made by IMAX cameras, 70mm cameras may have to be used for shooting the film's dialogue scenes.[43]

Filming was scheduled to start in May and conclude in November 2011.[45] Principal photography commenced on May 6, 2011, in Jodhpur, India at the Mehrangarh Fort[46][47] before moving to Pittsburgh, where it operated under the working title "Magnus Rex".[48][49] Shooting locations within the city included Heinz Field, the site of an American football game,[50] with members of the Pittsburgh Steelers playing the Gotham Rogues football team.[26][27] Filming in Pittsburgh also took place at the Mellon Institute and Software Engineering Institute at Carnegie Mellon University.[49] A letter sent out to residents and business owners detailing road closures revealed that the streets of the city would be featured "as the start of [the] film".[51] 9-1-1 operators were told to expect an increase in calls related to gun shots and explosions in the film's production.[52] The Pittsburgh leg of production wrapped after three weeks on August 21, 2011, before moving on to Los Angeles and New York.[53] In November 2011, shooting shifted to Newark, New Jersey.[54][55] Newark City Hall and Military Park were among the locations used for filming[56] Other shooting locations include London and Glasgow, the latter of which was used for "additional exterior filming".[57] Principal photography concluded on November 14, 2011.[58]

Production photos from filming in Pittsburgh showed a second Tumbler chassis after the first was destroyed in The Dark Knight.[59] Further set photos revealed a "new vehicle" being transported to Wabash Tunnel, prompting speculation as to its nature.[60] In June 2011, Autoblog confirmed the presence of the new Lamborghini Aventador on the film set.[61]

For the creation of the film's soundtrack, Hans Zimmer crowdsourced online for audio recordings of a chant, which would be used in the film's score.[62]

Several accidents occurred during the production of the film. While filming at Wollaton Hall, a tractor-trailer crashed into the main entrance, though no one was injured.[63] A stuntman parachutist later crashed through the roof of a home in Cairngorm Gliding Club, Feshiebridge in Scotland, and became wedged there after a failed landing during a skydiving stunt; he was not seriously injured.[64] While filming scenes in Pittsburgh, Hathaway's stunt double crashed into an IMAX camera while filming a sequence that required her to ride a Batpod down a flight of stairs during a riot. There were no injuries,[65] but the camera was destroyed.[65] A second accident took place in Pittsburgh when the truck carrying the new, unidentified vehicle went off-course and crashed into a lighting array, damaging the model of the aircraft. Production was delayed while the model was repaired.[66]

In May 2011, the film's official website was launched, introducing a viral marketing campaign similar to the one used to promote The Dark Knight. When the website was opened, an encrypted audio file played the noise of what has been described as chanting. When the audio file was decrypted, it gave a link to the film's official Twitter account. For every person who commented on the Twitter account, a pixel was removed from the webpage, eventually revealing the first official image of Bane.[67]

In July 2011, a teaser trailer that was meant to be released with Harry Potter and the Deathly Hallows – Part 2 was leaked online.[68] It was released by the studio three days later. Responses to the trailer were mixed; Stephen Spencer Davis of Slate wrote that it successfully built hype,[68] while Kofi Outlaw of ScreenRant was disappointed with the trailer, claiming that it was more of an "announcement trailer" than an actual teaser trailer. Outlaw criticized the quality of the trailer, writing that a scene depicting Commissioner Gordon in a hospital bed was overly dramatic, had "hammy" dialogue, and was difficult to understand due to Gordon's labored breathing. Outlaw wrote that the final sweeping shot of Gotham City had poor CGI and was too reminiscent of the trailer for Inception.[69]

Continuing a method used with The Dark Knight whereby the opening sequence of the film was attached to IMAX prints of I Am Legend, seven months before release,[70] a six minute prologue of The Dark Knight Rises is to be attached to 70mm IMAX prints of Mission: Impossible – Ghost Protocol starting December 16, 2011, again approximately seven months before release.[71]

Cite error: <ref> tag with name "TDKRChant" defined in <references> is not used in prior text; see the help page.