The critical minimum effort theory has been given by Harvey Leibenstein, in his book Economic Backwardness and Economic Growth. This theory relates to overpopulated and underdeveloped or developing nations such as India and Indonesia.This theory is based on Malthusian theory of population.

This theory is one of the balanced growth theories. In this theory Leibenstein essentially talks about how large doses of investments in an economy can help the economy in development. [1][2]

There are two points which are assumed to be true in this theory:

Also there are three other important points apart from the assumptions, which are of prime imporatnce to Harvey Leibenstein's theory:

The critical minimum effort theory is more or less an extension of the Harrod-Domar model.[3]

Harvey Leibenstein's thesis is based on the following propositions: Nelson (1 956) and Leibenstein (1957) proposed that when population will increase per capita income will also increase along with it, and thus the per capita income of the economy rises above the minimum subsistence level. Both, Nelson and Leibenstein said that even though the income rises initially, there is an upper limit to it, which is about 3-4% per annum, after this point a rise in the per capita income will not be accompanied by a rise in the rate of growth of population, instead it may also decrease after a certain point (this is because at high income levels people want to keep their family size small so that they can maintain high standards if living.) [3]

Nelson and Leibenstein have sressed on the importance of Social structure, Human capital, and Entrepreneurship, but they say that the development of these and investment in these sectors alone can not attain critical minimum effort.[3] 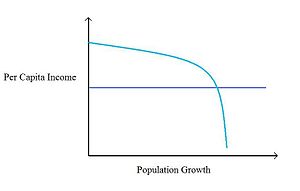 This shows that the increased per capita income leads to an increase in the population growth rate and eventually the economy is brought back to the old level of low level equilibrium. Thus population acts as an income depressing factor.[4] 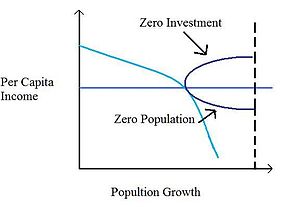 In this figure, the initial equilibrium point is where the blue line intersects the horizontal line parallel to the X axis. Now if there is any displacement in the system in the form of lets say investments then the system will be brought back to this equilibrium point.

The zero investment point is above the zero population point due to time lag. The population needs some time to increase. If it would have been the other way then the economy would never be able to come out of the trap.[5]

Critical minimum effort theory is one of the balanced growth theories. It talks about how a minimum amount of push is required by an economy for it to be set on the path of development. This push can be in the form of investments. The "minimum" amount of effort that is required is "critical" for the economy to move towards development hence this theory is called critical minimum effort..[6][dead link] Because of the high population in underdeveloped countries the capital accumulation and labour supply are not sufficient to increase the per capita income.

So it is necessary that the initial investment levels are sufficiently above a minimum magnitude. So it is not necessary that all efforts to raise the per capita income are successful, some are just too small or below the minimum required level. Now since this type of investment sometimes becomes difficult for underdeveloped nations, Leibenstein stresses on the fact that the investment can be spread over a period of time and does not necessarily have to be made instantaneously. [7]

The main idea of the theory is that the vicious circle needs to be broken and the per capita income should increase.[8]

1. A backward economy is an equilibrium system whose equilibrium state possesses a degree of quasi stability with respect to per capita income.

From the above hypotheses we can conclude that "in order to achieve the transition from the state of backwardness to the more developed state it is required (a necessary but not sufficient condition), the economy should receive a certain stimulus to growth and which should be greater than a certain critical minimum size."

Leibenstein has used these 2 terms stimulants and shocks in his theory quite often. He defines Stimulant as any event that changes the value of a variable away from its equilibrium value so that due to this event there is an initial increase in the per capita income.

Shock on the other hand has been defined by Leibenstein as any event external to the system due to which per capita income is reduced initially.

Now in underdeveloped economies shocks are more powerful than stimulants so what should be done in such a scenario is that the levels of incomes should be risen to such an extent that stimulants become stronger than shocks and the growth in incomes becomes self sustaining.

Factors Determining The Need For A Minimum Effort

Leibenstein in his theory discusses the factors that determine the need for the minimum effort required by the developing economies:

(i) a strong profit incentive

(iii) an eagerness to promote technical and scientific progress.

If a country wants to achieve balanced growth, then critical minimum effort is almost a pre-condition.

Critical minimum effort theory as opposed to big push theory does not stress on the fact that a lump some amount of investment has to be made instantaneously. So it is more relevant for under developed nations.

rate. Instead population depends upon a number of economic and non economic factors.