Cigarette taxes in the United States

Cigarette taxes in the United States 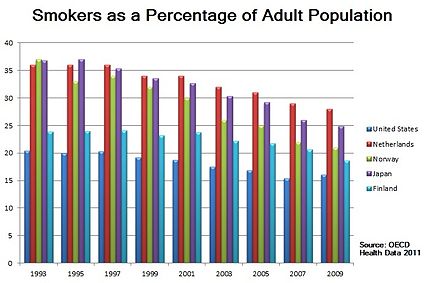 Smokers as a percentage of the population for the United States as compared with the Netherlands, Norway, Japan, and Finland.

In the United States cigarettes are taxed at both the federal and state levels, in addition to any state and local sales taxes and local cigarette-specific taxes. Cigarette taxation has appeared throughout American history and still presents itself prominently today. Overall public health officials are in favor of the tax hike because it ultimately leads to decreased smoking rates. Tobacco companies criticize the increase when in actuality they have been steadily increasing prices independent of taxes.

Although cigarettes were not popular in the United States until the mid-19th century, the federal government still attempted to implement a tax on tobacco products such as snuff early on in its history. In 1794, secretary of the treasury Alexander Hamilton introduced the first ever, federal excise tax on tobacco products. Hamilton’s original proposal passed after major modifications, only to be repealed shortly thereafter with an insignificant effect on the federal budget.[1] Even though Hamilton’s tax on tobacco failed, tobacco taxation continued to play an important role in American history.

On July 1, 1862, the United States Congress passed excise taxes on many items including tobacco. This occurred as a result of the Union army’s increasing debt during the American Civil War and the Federal government’s need for additional revenue. After the war, many of these excise taxes were repealed but the tax on tobacco remained. In fact, by 1868 the Government’s main source of income came from these lingering tobacco taxes.[2]

Despite the excise tax of the Federal government, states did not ratify a tobacco excise tax until well into the 20th century. In 1921, Iowa became the first state to pass a tobacco excise tax at the state level in addition to the federal tax.[3] Other states quickly followed suit, and by 1950, 40 states and Washington D.C. enacted taxes on cigarette sales.[4]

Since at 1969, all U.S. states, the District of Columbia and the territories have cigarette taxes. In addition, several cities such as Chicago and New York City have implemented their own citywide cigarette tax. New York City has a citywide tax of $1.50, making the combined state and local rate $5.85, the highest in the nation. Missouri's rate is the lowest, at 17 cents.

Under the Obama Administration

On February 4, 2009, the Children's Health Insurance Program Reauthorization Act of 2009 was signed into law, which raised the federal tax rate for cigarettes on April 1, 2009 from $0.39 per pack to $1.01 per pack.[5][6] The purpose of the State Children’s Health Insurance Program (SCHIP) is to provide aid for impoverished children. With the increased revenue from tobacco taxes SCHIP can now afford to include families with up to three times the federal poverty level as well as children from high-income families in New York and New Jersey. SCHIP will also be able to cover dental benefits and treatment of mental illnesses where it previously could not. In addition to providing these services for U.S. citizens, SCHIP is also expanded to cover immigrant children and immigrant pregnant women.[7]

Even though this bill taxed smokers in order to fund a children’s health program, President Barack Obama received both criticism and support for signing this act.

One of the biggest critiques of the passing of this bill comes from economists who believe that an increase in the federal cigarette tax will lead to decreased funding for state programs that rely on their own state cigarette taxes.[8] Critics doubt that states can economically withstand a decrease in this sort of revenue because of a federal tax increase. The logic is such: According to Nobel prize winning economist Gary Becker, who has studied the long-run price elasticity of cigarettes, the tax increase as a result of the Children’s Health Insurance Program Reauthorization Act increases the price of cigarettes 13.3% which ultimately means a 10.6% decrease in unit sales. The National Tax Foundation calculates these numbers to determine a predicted $1 billion loss for states. In addition, opponents of this bill attack it as regressive saying that the tax increase unfairly targets the poor because according to the Centers for Disease Control and Prevention (CDC) more than half of all smokers are low income.[9]

Supporters of the tax increase counterpoint this argument by pointing out that lower-income communities already suffer from tobacco related illnesses at a disproportionately higher rater than their higher-income counterparts. They claim that tobacco-related diseases are already regressive, and that the tax increase is trying to decrease these rates of disease among lower income smokers by encouraging them to quit.[10]

Further criticism rests on the belief that the own-price elasticity of demand for cigarettes is quite low. The amount of cigarettes purchased will remain reasonably unchanged, while smokers purchase less food, clothing, shelter and other necessities. This is a particularly important issue for those earning low incomes.

Cigarette tax increases have also resulted in an increase in cigarette smuggling. In response, the U.S. Congress overwhelmingly passed a bill to strengthen enforcement against cigarette smugglers. Entitled the Prevent All Cigarette Trafficking Act (The PACT Act), the measure targets organizations that sell tax-free cigarettes, improves enforcement toward cigarette smuggling between states, and bans the United States Postal Service from delivering most tobacco products. President Barack Obama signed the bill into law on March 31, 2010. Most of the new provisions went into effect on June 29, 2010.[11]

One of the reasons that public health officials support cigarette tax increases is because many studies show that this leads to a decrease in smoking rates. The relationship between smoking rates and cigarette taxes is in fact very elastic; the greater the amount of the tax increase the greater the proportion of smokers who stop smoking.[12] This is especially prevalent amongst teenagers. For every ten percent increase in the price of a pack of cigarettes, youth smoking rates overall drop about seven percent.[13] This rate is also true amongst minorities and low income population smokers.[14] Many states can testify to these statistics because the rates of calls to quitting hot-lines are directly related to cigarette tax hikes. When Wisconsin raised its state cigarette tax to $1.00 per pack, the hot-line received a record of 20,000 calls in a two month time period versus its typical 9,000 calls annually.[15] Some critics[who?] point to an overall anti-tobacco sentiment as the reason for a decrease in smoking rates. However, an analysis of smoking and cigarette tax rates in 1955 through 1964, prior to the Surgeon General’s first report and general antismoking sentiment, show the same relationship between tax increases and declining smoking rates that are prevalent today.[12]

Proportion of taxes in cigarette prices

Although some[who?] believe that taxes constitute a disproportionate percentage of the retail price of cigarettes, data show that while the price of cigarettes has continuously increased since 1965, the percentage of that price going towards taxes is now half of what it was then.[14] While tobacco companies complain about the $1.01 cigarette tax, Phillip Morris, Reynolds American, and Lorillard have all increased their prices by almost $1.00 per pack on their own.[16] Phillip Morris currently lists all taxes, including federal, state, local, and sales taxes, as 56.6% of the total cost of a pack of cigarettes[17] 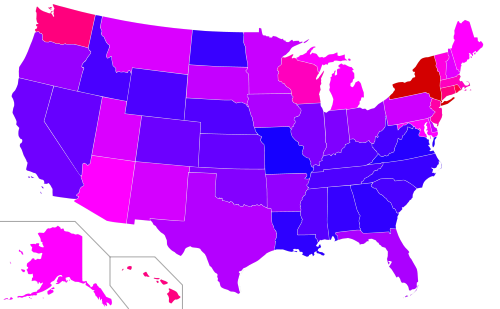 Taxes on smokeless (chewing) tobacco, as well as (and often concurrent with) snuff, cigars and pipe tobacco, are also common in the United States. Forty-nine states and the District of Columbia have such a non-cigarette tax(es), Pennsylvania being the sole exception, having no smokeless or cigar tax at all (though it considers small cigars to be cigarettes for taxation purposes). Of the 49 states that do impose in this category, Florida does not tax cigars, though all other tobacco products are taxed. The U.S. federal government charges different non-cigarette excise taxes, according to the following 6 categories: snuff, chewing tobacco, pipe tobacco, roll-your-own, large cigars, and small cigars.[21] Cigarette papers and tubes are also taxed.