Cherokee Trail
This article is about the historic Colorado trail. For the high school in Aurora, Colorado, see Cherokee Trail High School. 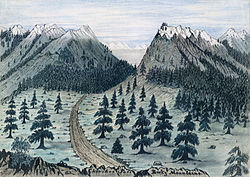 The Cherokee Trail (also known as the Trappers' Trail) was a historic overland trail through the present-day U.S. states of Oklahoma, Kansas, Colorado, and Wyoming that was used from the late 1840s up through the early 1890s. The route was established in 1849 by a wagon train headed to the gold fields in California. Among the members of the expedition were a group of Cherokee.

The route of the trail ran from the Grand River near present day Salina, Oklahoma, northwest to strike the Santa Fe Trail at McPherson, Kansas. From there it followed the Santa Fe Trail west, then turned north along the base of the Front Range of the Rocky Mountains over the Arkansas/Platte River divide and descended along Cherry Creek (Colorado) into the valley of the South Platte River. The original 1849 trail followed the east side of the South Platte River to present-day Greeley then west via a wagon road to Laporte in Larimer County. From Laporte, the wagon road was built north past present-day Virginia Dale Stage Station to the Laramie Plains in southeastern Wyoming. The trail was then blazed westward and northward around the Medicine Bow Range crossing the North Platte River then turning north to present day Rawlins. The trail proceeded west along the route of present Interstate 80, finally joining the Oregon, California, and Mormon trails near Granger, Wyoming.

In 1850, an additional route was blazed on the west side of the South Platte River, crossing the Cache la Poudre River, and then to the Laramie Plains. There the trail turned west near present day Tie Siding, and proceeded along the Colorado/Wyoming border to Green River and to Fort Bridger where it struck the other emigrant trails.

Parts of the 1850 trail can be seen on Bureau of Land Management land in Wyoming. In Sweetwater County the trail on BLM sections is marked with 4-foot-high (1.2 m) concrete posts.

In Colorado parts of the trail are still visible and walkable in Arapahoe, Douglas and Larimer counties. An approximation of the route can be driven on State Highway 83 from Parker near Denver to Colorado Springs.

In 1849, Lieutenant Abraham Buford, escorting the mail from Santa Fe to the east, turned south at McPherson, Kansas, to follow the recently blazed Evans/Cherokee Trail to Fort Gibson, Oklahoma, and then connected with another trail to nearby Fort Smith, Arkansas. Starting in 1850 the trail was used continuously by gold seekers, emigrants and cattle drovers from Arkansas, Texas, Missouri, and the Cherokee Nation.

In 1850, a member of a wagon train en route to California discovered gold in Ralston Creek, a tributary of Clear Creek north of present day Denver. Stories of this discovery led to further expeditions in 1858, and the subsequent 1859 Colorado Gold Rush.

In the 1860s portions of the trail from northern Colorado to Fort Bridger in Wyoming were incorporated as part of the Overland Trail and stage route between Kansas and Salt Lake City, Utah.

The outlaw L.H. Musgrove traveled on the Cherokee Trail from Colorado into Wyoming during the 1860s.