Sharjah (Arabic: الشارقة‎) (ash-shāriqah; pronounced /ˈʃɑrdʒə/ in English) (Urdu:شارجہ) is the third largest and most populous city in the United Arab Emirates. It is located along the southern coast of the Persian Gulf on the Arabian Peninsula.

Sharjah is the seat of government of the emirate of Sharjah. Sharjah shares legal, political, military and economic functions with the other emirates within a federal framework, although each emirate has jurisdiction over some functions such as civil law enforcement and provision and upkeep of local facilities. Sharjah has been ruled by the Al Qasimi dynasty since the 18th century.

Many researchers have supposed that the word Sharqah, to which Sharjah owes its origins, comes from light.[citation needed] The terrain is so flat that the sun shines evenly on the land.[clarification needed]

Sultan Al Omaimi, a UAE poet and researcher in folk literature, says that some historians speculate that Sharjah was the name of an idol worshipped in the pre-Islamic era which was known as Abed Al Shareq. It also had a feminine form called Al Shareqa.[citation needed] Another theory finds that the word Sharqah comes from a fort in Andalusia as mentioned in the encyclopaedic book, "Kitab mu'jam al-buldan" written by the Muslim scholar Yaqut Al Hamawi.[citation needed]

Other researchers link the word Sharqah to the fact that the city is located to the Sharq, or east, of Dubai and Abu Dhabi. Hence the Arabic classical form of Sharjah is Al Shareqah. It is the colloquial form that is Al Sharjah.[2]

Historically, Sharjah was one of the wealthiest towns in this region with a settlement in existence for over 5000 years. In the early 18th century, the Qawasim clan (Huwayla tribe) established itself in Sharjah, c.1727 declaring Sharjah independent. On 8 January 1820, Sheikh Sultan I signed the General Maritime Treaty with Britain, accepting a protectorate to keep the Ottoman Turks out. Like four of its neighbours, Ajman, Dubai, Ras al-Khaimah, and Umm al-Qaiwain, its position on the route to India made it important enough to be recognized as a salute state (be it of the lowest class: 3 guns). On 2 December 1971, Sheikh Khalid III joined the United Arab Emirates.

Like the other former Trucial States, Sharjah's name is known by many stamp collectors because of the large numbers of stamps that were issued by the Sharjah Post Office shortly before the formation of the United Arab Emirates.[3] Many of these items feature subjects unrelated to the emirates whose names they bear, and therefore many popular catalogues do not list them.[4]

Sharjah is the third largest city (after Dubai and Abu Dhabi) in the United Arab Emirates. The palace of the ruler of the Emirate of Sharjah (Sultan bin Mohamed Al-Qasimi) is located about 20 kilometres (12 mi) southeast of the city.

The city of Sharjah overlooks the Persian Gulf and has a population of over 800,000 (2008). It contains the main administrative and commercial centers together with an array of cultural and traditional projects, including several museums covering areas such as archaeology, natural history, science, arts, heritage, islamic art and culture. Distinctive landmarks include two major covered souks, reflecting Islamic design, and a number of recreational areas and public parks such as Al Jazeirah Fun Park and Al Buheirah Corniche. The city is also notable for its numerous elegant mosques. The Emirate of Sharjah is also known to be the Cultural Capital of the UAE with its rich legacy of arts, heritage and culture. After the construction boom that took place in Dubai in 2005, towering skyscrapers and modern buildings were constructed in areas like Al Khan and Khaled Lagoon. These modern tall buildings and the subsequent increase in population coupled with poor infrastructure made Sharjah suffer from traffic jams. This was also due to its location between the northeastern emirates and Dubai. Many Sharjah residents travel 15 kilometers to visit Dubai on the weekend. Sharjah is bordered by the cities of Dubai and Ajmān and is about 170 kilometers away from the capital city Abu Dhabi. 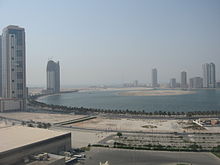 view of AL khan lagoon one of sharjah three lagoons 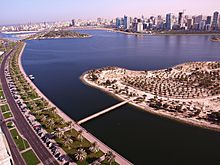 The Buhairah Corniche has numerous upscale hotels. The Sharjah Commerce Tourism Development Authority is also located along the corniche.

Al Qasba (renamed from Qanat Al Qasba, QAQ, in March 2008) is a small art, culture, leisure, and tourist area in Sharjah with the "Eye of the Emirates", the giant wheel offering aerial view of the emirate's corniche, lagoons and landscape as well as the horizons of the neighbouring Dubai, the boat ride offering a panoramic view of the walkways, bridges and some of the cultural attractions and modern skyscrapers of the emirate and Al Qasba Musical Fountain shows appeal to one and all with its dancing to the beat theme. 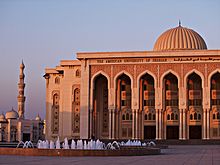 One Day International at Sharjah in 1998 (Australia v India)

The Sharjah Cricket Association Stadium has hosted almost 200 cricket One Day Internationals, more than any other ground, and 4 Test matches. Football clubs include Al Sharjah and Al-Shaab in the First League, and Al Hemriah, Al The-aed , Al Khaleej and Dibba in the 2nd league.

Since 2003, there have been no major international matches at Sharjah, although the stadium has been the venue for certain other matches, such as the 2004 ICC Intercontinental Cup. The use of the venue has declined as the new 20,000 seat Sheikh Zayed Cricket Stadium in Abu Dhabi has become the preferred venue for cricket in the UAE.

Also, the organisers of Sharjah Grand Prix host the Formula One World Powerboating Championships every year at Al Buhaira Corniche, Sharjah. In 2005, it was held under the patronage of Shaikh Sultan Bin Mohammad Bin Sultan Al Qasimi, Crown Prince and Deputy Ruler of Sharjah.