Seaside is a city in Clatsop County, Oregon, United States. The name Seaside is derived from Seaside House, a historic summer resort built in the 1870s by railroad magnate Ben Holladay. The city's population was 6,457 at the 2010 census.[1] 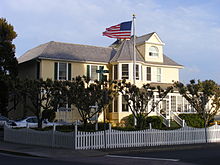 The Gilbert House in Seaside

About January 1, 1806, a group of men from the Lewis and Clark Expedition built a salt-making cairn at the present site of Seaside. The Native American name for the Clatsop village near the cairn was Ne-co-tat. The city was incorporated on February 17, 1899.[4]

In 1912, Alexandre Gilbert (1843–1932) was elected Mayor of Seaside. Gilbert was a French immigrant, a veteran of the Franco Prussian War. After living in San Francisco, California and Astoria, Oregon, Gilbert moved to Seaside where he had a beach cottage (built in 1885). Gilbert was a real estate developer who donated land to the City of Seaside for its one and a half mile long Promenade, or "Prom," along the Pacific beach.

In 1892 he added to his beach cottage. The Gilbert House, since the mid 1980's operated commercially as the Gilbert Inn, still stands at Beach Drive and A Avenue. Gilbert's "Gilbert Block" office building on Broadway also survives.

Gilbert died at home in Seaside and is interred in Ocean View Abbey Mausoleum in Warrenton, Oregon.

Seaside lies on the edge of the Pacific Ocean, at the southern end of the Clatsop Plains, about 29 km (18 mi) south of where the Columbia River empties into the Pacific. The Necanicum River bisects the city and flows out to the ocean at the city's northern edge. Tillamook Head towers over the south edge of the city.

Seaside holds an art walk the first Saturday of each month.[citation needed]

Seaside hosts an annual 4th of July celebration which includes a parade, outdoor concerts, and one of the largest fireworks displays on the west coast.[7]

Every spring, Seaside hosts the Dorchester Conference, a convention of the Oregon Republican Party. This convention was founded in 1964, by then-state representative Bob Packwood as a forum for liberal Republicans, but within the next few years it attracted interest from other Republicans, and in the 1990s was dominated by members of the conservative branch of the party. Over the years the conference has attracted visits from presidential candidates, debates between Republican primary candidates, and discussions of wider political and social issues.[8]

The Miss Oregon Pageant, the official state finals to the Miss America Pageant, takes place annually at the Seaside Civic and Convention Center.[9]

The annual Salt Maker's Return is held in August. The themed event celebrates Seaside history as the site where the Lewis and Clark expedition took five men nearly two months to make the equivalent of 28 gallons of salt necessary to preserve meat for the winter and their journey home.[10]

Seaside is home to the Seaside Aquarium, featuring living regional marine life, a hands-on discovery center, and a 35-foot Gray Whale skeleton, all within a short walk from the Lewis & Clark monument.[11]