The Mannich reaction is an organic reaction which consists of an amino alkylation of an acidic proton placed next to a carbonyl functional group with formaldehyde and ammonia or any primary or secondary amine. The final product is a β-amino-carbonyl compound also known as a Mannich base.[1] Reactions between aldimines and α-methylene carbonyls are also considered Mannich reactions because these imines form between amines and aldehydes. The reaction is named after chemist Carl Mannich.[2][3]

The Mannich reaction is an example of nucleophilic addition of an amine to a carbonyl group followed by dehydration to the Schiff base. The Schiff base is an electrophile which reacts in the second step in a electrophilic addition with a compound containing an acidic proton(which is, or had become an enol). The Mannich reaction is also considered a condensation reaction.

In the Mannich reaction, ammonia or primary or secondary amines are employed for the activation of formaldehyde. Tertiary amines lack an N-H proton to form the intermediate imine. α-CH-acidic compounds (nucleophiles) include carbonyl compounds, nitriles, acetylenes, aliphatic nitro compounds, α-alkyl-pyridines or imines. It is also possible to use activated phenyl groups and electron-rich heterocycles such as furan, pyrrole, and thiophene. Indole is a particularly active substrate; the reaction provides gramine derivatives.

The mechanism of the Mannich reaction starts with the formation of an iminium ion from the amine and the formaldehyde.

Because the reaction takes place under acidic conditions, the compound with the carbonyl functional group (in this case a ketone) can tautomerize to the enol form, after which it can attack the iminium ion.

The reaction taking place is between a simple aldehyde such as propionaldehyde and an imine derived from ethyl glyoxylate and p-methoxyaniline (PMP = paramethoxphenyl) catalyzed by (S)-proline in dioxane at room temperature. The reaction product is diastereoselective with a preference for the syn-Mannich reaction 3:1 when the alkyl substituent on the aldehyde is a methyl group or 19:1 when the alkyl group the much larger pentyl group. Of the two possible syn adducts (S,S) or (R,R) the reaction is also enantioselective with a preference for the (S,S) adduct with enantiomeric excess larger than 99%. This stereoselectivity is explained in the scheme below. 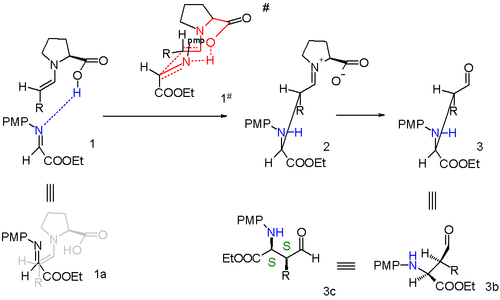 Proline enters a catalytic cycle by reacting with the aldehyde to form an enamine. The two reactants (imine and enamine) line up for the Mannich reaction with Si facial attack of the imine by the Si-face of the enamine-aldehyde. Relief of steric strain dictates that the alkyl residue R of the enamine and the imine group are antiperiplanar on approach which locks in the syn mode of addition. The enantioselectivity is further controlled by hydrogen bonding between the proline carboxylic acid group and the imine. The transition state for the addition is a nine-membered ring with chair conformation with partial single bonds and double bonds. The proline group is converted back to the aldehyde and a single S,S isomer is formed.

By modification of the proline catalyst to it is also possible to obtain anti-Mannich adducts.[5] 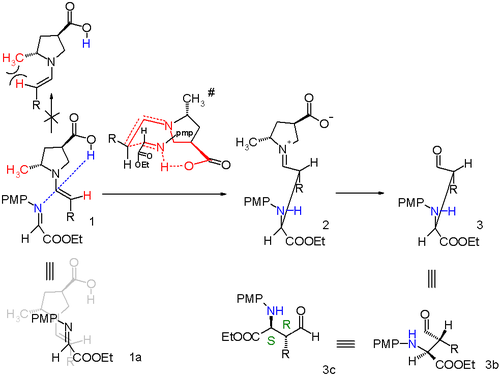 An additional methyl group attached to proline forces a specific enamine approach and the transition state now is a 10-membered ring with addition in anti-mode. The diastereoselectivity is at least anti:syn 95:5 regardless of alkyl group size and the S,R enantiomer is preferred with at least 97% ee.

The Mannich-Reaction is employed in the organic synthesis of natural compounds such as peptides, nucleotides, antibiotics, and alkaloids (e.g. tropinone). Other applications are in agro chemicals such as plant growth regulators,[6] paint- and polymer chemistry, catalysts and crosslinking.

The Mannich reaction is also used in the synthesis of medicinal compounds e.g. rolitetracycline (Mannich base of tetracycline), fluoxetine (antidepressant), tramadol, and tolmetin (anti-inflammatory drug).