The Indian Information Technology industry accounts for a 5.19% of the country's GDP and export earnings as of 2009, while providing employment to a significant number of its tertiary sector workforce. However, only 2.5 million people are employed in the sector either directly or indirectly. In 2010-11, annual revenues from IT-BPO sector is estimated to have grown over $54.33 billion compared to China with $35.76 billion and Philippines with $8.85 billion.[1] It is expected to touch at US$225 billion by 2020. The most prominent IT hub are Bangalore and Hyderabad. The other emerging destinations are Chennai, Coimbatore, Kolkata, Kochi, Pune, Mumbai, Ahmedabad, NCR. Technically proficient immigrants from India sought jobs in the western world from the 1950s onwards as India's education system produced more engineers than its industry could absorb. India's growing stature in the Information Age enabled it to form close ties with both the United States of America and the European Union. However, the recent global financial crises has deeply impacted the Indian IT companies as well as global companies. As a result hiring has dropped sharply, and employees are looking at different sectors like the financial service, telecommunications, and manufacturing industries, which have been growing phenomenally over the last few years.[2] India's IT Services industry was born in Mumbai in 1967 with the establishment of Tata Group in partnership with Burroughs.[3] The first software export zone SEEPZ was set up here way back in 1973, the old avatar of the modern day IT park. More than 80 percent of the country's software exports happened out of SEEPZ, Mumbai in 80s.[4]

The Indian Government acquired the EVS EM computers from the Soviet Union, which were used in large companies and research laboratories. In 1968 Tata Consultancy Services—established in SEEPZ, Mumbai[3] by the Tata Group—were the country's largest software producers during the 1960s. As an outcome of the various policies of Jawaharlal Nehru (office: 15 August 1947 – 27 May 1964) the economically beleaguered country was able to build a large scientific workforce, third in numbers only to that of the United States of America and the Soviet Union. On 18 August 1951 the minister of education Maulana Abul Kalam Azad, inaugurated the Indian Institute of Technology at Kharagpur in West Bengal. Possibly modeled after the Massachusetts Institute of Technology these institutions were conceived by a 22 member committee of scholars and entrepreneurs under the chairmanship of N. R. Sarkar.

Relaxed immigration laws in the United States of America (1965) attracted a number of skilled Indian professionals aiming for research. By 1960 as many as 10,000 Indians were estimated to have settled in the US. By the 1980s a number of engineers from India were seeking employment in other countries. In response, the Indian companies realigned wages to retain their experienced staff. In the Encyclopedia of India, Kamdar (2006) reports on the role of Indian immigrants (1980 - early 1990s) in promoting technology-driven growth:

The National Informatics Centre was established in March 1975. The inception of The Computer Maintenance Company (CMC) followed in October 1976. Between 1977-1980 the country's Information Technology companies Tata Infotech, Patni Computer Systems and Wipro had become visible. The 'microchip revolution' of the 1980s had convinced both Indira Gandhi and her successor Rajiv Gandhi that electronics and telecommunications were vital to India's growth and development. MTNL underwent technological improvements. Between 1986-1987, the Indian government embarked upon the creation of three wide-area computer networking schemes: INDONET (intended to serve the IBM mainframes in India), NICNET (the network for India's National Informatics Centre), and the academic research oriented Education and Research Network (ERNET).

The Indian economy underwent economic reforms in 1991, leading to a new era of globalization and international economic integration. Economic growth of over 6% annually was seen between 1993-2002. The economic reforms were driven in part by significant the internet usage in the country. The new administration under Atal Bihari Vajpayee—which placed the development of Information Technology among its top five priorities— formed the Indian National Task Force on Information Technology and Software Development.

Wolcott & Goodman (2003) report on the role of the Indian National Task Force on Information Technology and Software Development:

Throughout the 1990s, another wave of Indian professionals entered the United States. The number of Indian Americans reached 1.7 million by 2000. This immigration consisted largely of highly educated technologically proficient workers. Within the United States, Indians fared well in science, engineering, and management. Graduates from the Indian Institutes of Technology (IIT) became known for their technical skills. Thus GOI planned to establish new Institutes specially for Information Technology to enhance this field. In 1998 India got the first IT institute name Indian Institute of Information Technology at Gwalior. The success of Information Technology in India not only had economic repercussions but also had far-reaching political consequences. India's reputation both as a source and a destination for skilled workforce helped it improve its relations with a number of world economies. The relationship between economy and technology—valued in the western world—facilitated the growth of an entrepreneurial class of immigrant Indians, which further helped aid in promoting technology-driven growth. 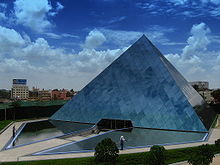 Tidel Park—one of the largest software parks in Asia—was set up on the July 4, 2000 in Chennai, to aid the growth of Information Technology in Tamil Nadu. 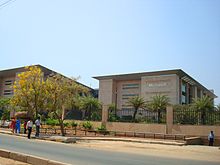 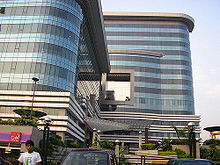 Millenium Tower in Kolkata, Salt Lake Sector-5, a major IT hub in the city. 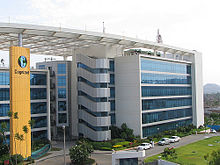 India is now one of the biggest IT capitals in the modern world.

The economic effect of the technologically inclined services sector in India—accounting for 40% of the country's GDP and 30% of export earnings as of 2006, while employing only 25% of its workforce—is summarized by Sharma (2006):

Today, Bangalore is known as the Silicon Valley of India and contributes 33% of Indian IT Exports. India's second and third largest software companies are head-quartered in Bangalore, as are many of the global SEI-CMM Level 5 Companies.

], Patni, LnT Infotech, i-Flex, WNS, Shine, Naukri, Jobspert etc. are head-quartered in Mumbai. and these IT and dot com companies are ruling the roost of Mumbai's relatively high octane industry of Information Technology.

Such is the growth in investment and outsourcing, it was revealed that Cap Gemini will soon have more staff in India than it does in its home market of France with 21,000 personnel+ in India.[7]

On 25 June 2002 India and the European Union agreed to bilateral cooperation in the field of science and technology. A joint EU-India group of scholars was formed on 23 November 2001 to further promote joint research and development. India holds observer status at CERN while a joint India-EU Software Education and Development Center is due at Bangalore.