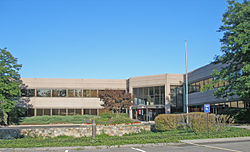 Gartner, Inc. (NYSE: IT) is an information technology research and advisory firm headquartered in Stamford, Connecticut, United States. It was known as GartnerGroup until 2001.[1]

Gartner is an information technology research and advisory company providing technology related insight. Research provided by Gartner is targeted at CIOs and senior IT leaders in industries that include government agencies, high-tech and telecom enterprises, professional services firms, and technology investors. Gartner clients include large corporations, government agencies, technology companies and the investment community. The company consists of Research, Executive Programs, Consulting and Events. Founded in 1979, Gartner has over 4,300 employees,[2] including 1,200 in R&D.[3]

The company was founded in 1979 by Gideon Gartner. Originally a private company, the Gartner Group was launched publicly in the 1980s, then acquired by Saatchi & Saatchi, a London-based advertising agency, and then acquired in 1990 by some of its executives, with funding from Bain Capital and Dun & Bradstreet. In 2001 the name was simplified to Gartner.

In the course of its growth, Gartner has acquired numerous companies providing related services, including Real Decisions (which became Gartner Measurement, now part of Gartner's consulting division), and Gartner Dataquest (Gartner's market research firm). It has also acquired a number of direct competitors, including NewScience in the late 1990s, Meta Group in 2005 and AMR Research and Burton Group in early 2010.

The CEO is Gene Hall (since August 2004). Business performance under Hall's management has continued to grow since taking over from his predecessor Michael Fleisher (Michael D. Fleisher) who moved on to Warner Music Group in 2005.[4]

Gartner research has been mentioned by many news institutions, including Financial Times,[5] The Wall Street Journal,[6] and The New York Times.[7] In December, 2010 Gartner Identified Top 30 Countries for Offshore Services in 2010-2011.