The Corpus Aristotelicum is the collection of Aristotle's works that have survived from antiquity through Medieval manuscript transmission. These texts, as opposed to Aristotle's lost works, are technical philosophical treatises from within Aristotle's school. Reference to them is made according to the organization of Immanuel Bekker's nineteenth-century edition, which in turn is based on ancient classifications of these works.

Overview of the extant works

The extant works of Aristotle are broken down according to the five categories in the Corpus Aristotelicum. Not all of these works are considered genuine, but differ with respect to their connection to Aristotle, his associates and his views. Some are regarded by most scholars as products of Aristotle's "school" and compiled under his direction or supervision. (The Constitution of Athens, the only major modern addition to the Corpus Aristotelicum, has also been so regarded.) Other works, such as On Colors may have been products of Aristotle's successors at the Lyceum, e.g., Theophrastus and Strato of Lampsacus. Still others acquired Aristotle's name through similarities in doctrine or content, such as the De Plantis, possibly by Nicolaus of Damascus. A final category, omitted here, includes medieval palmistries, astrological and magical texts whose connection to Aristotle is purely fanciful and self-promotional.

In several of the treatises, there are references to other works in the corpus. Based on such references, some scholars have suggested a possible chronological order for a number of Aristotle's writings. W.D. Ross, for instance, suggested the following broad chronology (which of course leaves out much): Categories, Topics, Sophistici Elenchi, Analytics, Metaphysics Δ, the physical works, the Ethics, and the rest of the Metaphysics.[1] Many modern scholars, however, based simply on lack of evidence, are skeptical of such attempts to determine the chronological order of Aristotle's writings.[2] 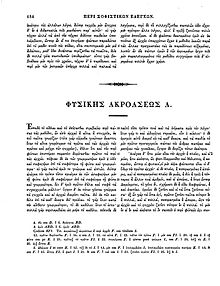 Page 184 of the first volume of Bekker's edition, published in 1831, showing the end of Sophistical Refutations and the beginning of Physics

Bekker numbers, the standard form of reference to works in the Corpus Aristotelicum, are based on the page numbers used in the Prussian Academy of Sciences edition of the complete works of Aristotle (Aristotelis Opera edidit Academia Regia Borussica, Berlin, 1831-1870). They take their name from the editor of that edition, the classical philologist August Immanuel Bekker (1785-1871).

Bekker numbers take the format of up to four digits, a letter for column 'a' or 'b', then the line number. For example, the beginning of Aristotle's Nicomachean Ethics is 1094a1, which corresponds to page 1094 of Bekker's edition of the Greek text of Aristotle's works, first column, line 1.

While Bekker numbers are the dominant method used to refer to the works of Aristotle, Catholic or Thomist scholars often use the medieval method of reference by book, chapter, and sentence, albeit generally in addition to Bekker numbers.

Stephanus pagination is the comparable system for referring to the works of Plato.

The following list is complete. The titles are given in accordance with the standard set by the Revised Oxford Translation.[3] Latin titles, still often used by scholars, are also given. Disputed works are marked by *, and ** marks a work generally agreed to be spurious.

Physics (the study of nature)

The Constitution of the Athenians

The Constitution of the Athenians (or Athenaiōn Politeia) was not included in Bekker's edition, because it was first edited in 1891 from papyrus rolls acquired in 1890 by the British Museum. The standard reference to it is by section (and subsection) numbers.

Surviving fragments of the many lost works of Aristotle were included in the third volume of Bekker's edition, edited by Valentin Rose. These are not cited by Bekker numbers, however, but according to fragment numbers. Rose's first edition of the fragments of Aristotle was Aristoteles Pseudepigraphus (1863). As the title suggests, Rose considered these all to be spurious. The numeration of the fragments in a revised edition by Rose, published in the Teubner series, Aristotelis qui ferebantur librorum fragmenta, Leipzig, 1886, is still commonly used (indicated by R3), although there is a more current edition with a different numeration by Olof Gigon (published in 1987 as a new vol. 3 in Walter de Gruyter's reprint of the Bekker edition), and a new de Gruyter edition by Eckart Schütrumpf is in preparation.[4]

The works surviving only in fragments include the dialogues On Philosophy (or On the Good), Eudemus (or On the Soul), Protrepticus, On Justice, and On Good Birth. For the dialogues, see also the editions of Richard Rudolf Walzer, Aristotelis Dialogorum fragmenta, in usum scholarum (Florence 1934), and Renato Laurenti, Aristotele: I frammenti dei dialoghi (2 vols.), Naples: Luigi Loffredo, 1987.