The National Federation of Federal Employees (NFFE) is an American labor union which represents about 100,000 public employees in the federal government.

Workers in federal agencies had formed craft-based unions on the local level beginning in the early 1880s. Unions representing letter carriers and railway postal clerks won passage in 1888 of federal legislation mandating an eight-hour day for postal workers. In 1898, these two unions—with the support of the Knights of Labor and the American Federation of Labor—pushed for legislation revising federal postal salaries as well. Although the effort was unsuccessful, a union of postal clerks organized in 1900.[3]

The growing power of these and other unions in the federal government led President Theodore Roosevelt to issue Executive order 163 on January 31, 1902, banning federal workers from "individually or through associations, [soliciting] an increase of pay, or to influence or to attempt to influence in their own interest any legislation whatever, either before Congress or its Committees, or in any way save through the heads of the Departments in or under which they serve, on penalty of dismissal from the government service."[4] This Executive Order was expanded by Roosevelt on January 26, 1906, to include the independent agencies as well. On November 26, 1908, Roosevelt dramatically widened the extent of the Executive Order to include military personnel, expanded the kind of information which could not be communicated, and banned other actions by employees.[3]

Under Congressional pressure, President William H. Taft made the Executive Order less onerous. On April 8, 1912, Taft amended the order to permit federal workers to communicate with Congress, but required them to do so through their supervisors and department heads.[3]

Unhappy with Taft's refusal to rescind the order entirely, Congress passed the Lloyd-La Follette Act (§6, 37 Stat. 555, 5 U.S.C. § 7511) on August 24, 1912, declaring that "the right of persons employed in the civil service of the United States, either individually or collectively, to petition Congress or any member thereof or to furnish information to either House of Congress or to any committee thereof, shall not be denied or interfered with."[3]

The Lloyd-La Follette Act provided a significant impetus to the formation federal employees' unions. In 1916, the American Federation of Labor (AFL) acted to bring the various local unions together to form a single national union. The National Federation of Federal Employees was founded in Washington, D.C., on September 17, 1917. In 1918, it became the first labor union to win the legal right to represent federal workers.[1][3] 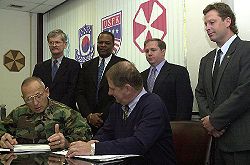 NFFE grew quickly. For example, by 1929 it had organized more than 1,500 workers at the Bureau of Engraving and Printing. The unit was the largest NFFE chapter in the country, the largest local union in the country, and the largest women's union in the country.[5] NFFE also quickly abandoned its craft focus. Some local chapters—especially those in large federal agencies in Washington, D.C., where the number of workers enabled craft-based bargaining units to remain viable—retained their craft structure. But most of the union's units throughout the country became industrial unions. Even many of the D.C.-area unions abandoned their craft orientation to become industrial unions with agency-wide bargaining units.[6]

The significance of the Bureau of Engraving and Printing local was not lost on NFFE. NFFE became a strong advocate for women's rights, and elected a woman, Florence Etheridge, as the chair of its first national council.[1]

NFFE relied heavily on the provisions of the Lloyd-La Follette Act as the basis for its operations. Much of the union's focus was on legislative action. For example, it began advocating for a formal federal job classification system and uniform rates of compensation in 1919. These efforts paid off: The same year, Congress established the Joint Congressional Committee on the Reclassification of Salaries. In 1923, NFFE won passage of the Classification Act, which established uniform, nationwide compensation levels and tied them to the duties and responsibilities of job positions.[1]

In 1931, NFFE disaffiliated from the American Federation of Labor. The break occurred over the AFL's refusal to abandon its support for craft unionism and cease its attacks on industrial unions. NFFE disaffiliated in December 1931. The AFL responded by chartering a new federal employees union, the American Federation of Government Employees (AFGE), on October 17, 1932.

In 1962, President John F. Kennedy signed Executive Order 10988, establishing the right of federal workers to engage in collective bargaining. Consequently, union membership among U.S. government employees soared from 13 percent in 1961 to 60 percent in the 1974. NFFE's membership also grew tremendously, roughly doubling during the same period from 80,000 members to 150,000 members.[7]

Such raids eventually drove NFFE to re-affiliate with the AFL-CIO. In 1998, AFGE began an organizing drive among 2,600 physicians, nurses and dentists working for the Veterans Health Administration in the U.S. Department of Veterans' Affairs.[13] The workers were already represented by NFFE, and constituted more than 85 percent of NFFE's membership in the VA health system. As NFFE's voting strength among the workers weakened, the national union's leaders sought to end the raid by affiliating with the AFL-CIO.[14] The AFL-CIO declined to issue a charter, but agreed to readmit the union if it affiliated with an existing AFL-CIO member. The NFFE executive council subsequently agreed to affiliate the union with the International Association of Machinists (IAM).[15] The IAM claimed to represent more than 100,000 federal workers, making it the second-largest union of federal workers. The affiliation did not help, however. Because the organizing dispute began prior to NFFE's affiliation with IAM, the AFL-CIO ruled that the election could go ahead. Although IAM devoted significant resources to the organizing battle, the Machinists' expertise was in the construction and aerospace fields, not health care. After a year-long campaign, AFGE convinced a majority of the VA employees to switch their affiliation in 2000.[16]

The IAM affiliation, however, helped to significantly strength NFFE in the longer term. New raids on NFFE membership no longer occurred, and the union's administrative and financial resources greatly improved. NFFE is now considered "a key player in backing collective bargaining and appeal rights of [federal] employees." As of 2007, NFFE represented about 100,000 federal workers.[1]

More recently, NFFE waged a lengthy legal battle against the U.S. Department of Defense's new National Security Personnel System. NFFE won several significant rulings in the legal fight but did not prevent the system's implementation, and the union began to pursue legislative remedies in Congress instead.[1]

The union also opposed the Iraq Study Group's recommendation that the Bush administration force government civilians to serve in Iraq.[17]

NFFE President Richard N. Brown died unexpectedly at his home in Arlington, Virginia, at the age of 47 on June 30, 2009. William Dougan, the union's Secretary-Treasurer, was automatically elevated to the position of President to serve out the rest of Brown's term (which expires in 2012).[2]