The British Rail Class 222 is a diesel-electric multiple unit high-speed train capable of 125 mph (200 km/h). Twenty-seven units have been built by Bombardier Transportation.

The Class 222 is similar to the Class 220 Voyager and Class 221 SuperVoyager trains used by CrossCountry and Virgin Trains but units have a different interior, which is less cramped than the Voyagers. The Class 222 trains have more components fitted under the floors to free up space within the body.

All coaches are equipped with a Cummins QSK19 diesel engine of 750 hp (560 kW) at 1800 rpm.[3] This powers a generator, which supplies current to motors driving two axles per coach. Approximately 1,350 miles (2,170 km) can be travelled between each refuelling.

Class 222 have rheostatic braking using the motors in reverse to generate electricity which is dissipated as heat through resistors situated on the roof of each coach, this saves on brake pad wear.

In common with the Class 220s, B5000 lightweight bogies are used - these are easily recognisable since the entire outer surface of the wheel is visible, with inboard axle bearings.

All Class 222 units are maintained at the dedicated Etches Park depot in Derby which is just south of Derby station.

Class 222 units are currently running in the following formations: 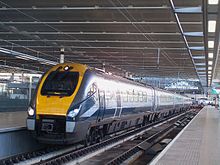 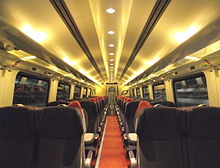 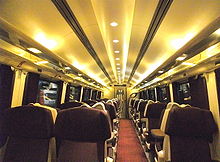 Initially, the 23 units ordered for Midland Mainline were 4-car and 9-car. Over time these have been gradually modified to the current formations. The 4-car units ordered by Hull Trains had an option when constructed to be extended to 5-cars if required.[5]

Midland Mainline introduced the first of 23 Class 222 units on 31 May 2004, branding them Meridian. These replaced a fleet of Class 170 Turbostars having better acceleration and top speed. 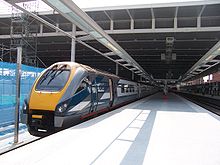 Seven of the sets were nine car Class 222 Meridians which intended for an enhanced London St Pancras to Leeds service, but after the trains had been ordered, the Strategic Rail Authority decided not to allow them to run the service.[6] The nine-car Meridians were used on London-Nottingham and some London-Sheffield services.

At the end of 2006 Midland Mainline removed a carriage from the each of the nine-car sets and extended seven of the four-car sets.

Midland Mainline had named some of the units as follows:

The names were removed when the franchise passed to East Midlands Trains.

In 2008 further rearrangements were made to the sets: another carriage was removed one coach from the eight-car Meridians, except for 222 007, which has been reduced to five-cars.[7] The surplus coaches were then added to the remaining four-car Meridians to make six seven-car sets (222 001-222 006) and 17 five-car sets (222 007-222 023). This process took place from March to October 2008; as part of the process two first class coaches removed from 222 007 were converted to standard class and part first class.

In December 2008 the Class 222 Meridians started work on the hourly London St Pancras to Sheffield services, because they have faster acceleration than the High Speed Trains and so were able to reduce the Sheffield to London journey time by 12 minutes. The hourly Nottingham service was then transferred to High Speed Train running to cover for the Meridians now working the hourly Sheffield fast service.[8]

In February 2009, 222 101 and 222 102 transferred from Hull Trains to East Midlands Trains, they were quickly repainted in the East Midlands Trains white livery. 222 104 followed from First Hull Trains later in the year. 222 103 followed a few months after 222 104 after repairs had been completed (see below). None of them been refurbished internally. 222103 has now been reinstated for service after two years for repairs after the unit fell from jacks at Bombardier, Crofton in early 2007. 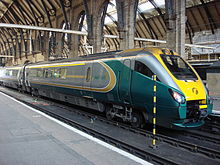 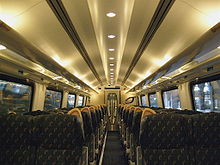 The interior of standard class aboard First Hull Trains unit 222104.

First Hull Trains (formerly known as 'Hull Trains') introduced Class 222 Pioneer units, to replace its Class 170 Turbostars in May 2005. The units reduced journey times between Hull and King's Cross by up to 20 minutes. The Pioneers have a different interior colour scheme and less first-class seating than the Meridians.

222 103 was involved in an accident during maintenance work that severely damaged two of the unit's four cars.

First Hull Trains have decided to use only Class 180 units from 2009 onwards. The Class 222 Pioneers have now been transferred to East Midlands Trains[9] and are now known as Meridians.

On 20 February 2010, 222005 working the 14:55 London St Pancras - Sheffield derailed near East Langton, Leicestershire. Two wheels on coach E in the middle of the train came off the track; on approaching the site of the derailment the train was travelling at close to 100 mph. No other wheels derailed and the train remained upright. There were also reports that one or more road vehicles on an adjacent highway were struck and damaged by debris as the derailed train passed.[citation needed] 222005 was moved from the site the next day after a replacement bogie was fitted and was for a few months formed of vehicles of 222101 and 222022 including a standard class cab end which was temporarily renumbered until the damaged vehicles were returned to the set in mid-June. The derailment caused damage to the Midland Main Line near Kibworth for a distance of two miles, the line underwent emergency repairs by Network Rail to get the stretch of line back open for start of service on 24 February 2010. The RAIB working with Bombardier and East Midlands Trains are currently investigating the incident. The RAIB’s preliminary examination has identified that the derailment is likely to have been the result of the failure of an axle in proximity to the final drive. Bombardier examined the rest of the 22X fleet within seven days of the incident and found no similar faults, however modifications have since been made to all the 22X fleet to monitor the gearbox oil levels more effectively.[13]

In 2005 HSBC Rail took delivery of the seven nine-car trains planned for use by Midland Mainline on their London-Leeds service, but the trains were left idle when the Strategic Rail Authority prevented Midland Mainline from operating this service. HSBC Rail made contact with Northern Ireland Railways and Iarnród Éireann, with a view to their leasing these units for use by Enterprise.[14] Using these trains on the Belfast-Dublin line was one of a number of options, which also included the purchase of additional 22000 Class railcars or cascaded coaching stock. In the event, the trains entered service with MML providing the fast services from London to Nottingham, thus releasing HSTs. The trains would have required significant modification to be used by Northern Ireland Railways, including reducing each train from nine to eight cars (the maximum length of stations on the Belfast-Dublin line), and converting them from standard gauge to Irish gauge (5 ft 3 inches).

Grand Central, on the announcement of its planned open-access operation to Sunderland in the summer of 2006, planned to run its services using five Class 222 units, with the intention of starting by the end of that year. However, this never happened, pushing back the planned start date while trying to source alternatives. Grand Central finally started operating in December 2007 using three High Speed Trains.[15]