Joseph Dominick Pistone, alias Donnie Brasco, (born September 17, 1939 in Erie, Pennsylvania), is a former FBI agent who worked undercover for six years infiltrating the Bonanno crime family and to a lesser extent the Colombo crime family, two of the Five Families of the Mafia in New York City.[1][2] Pistone was an FBI agent for 17 years and is considered to be an FBI legend.[3]

Pistone was a pioneer for deep long-term undercover work. J. Edgar Hoover originally did not want FBI agents to work undercover because it could be a dirty job and might end up tainting the agents, but Pistone's work helped convince the FBI that using undercover agents instead of just using informants was a crucial tool in law enforcement.[4]

Pistone was born in Erie, Pennsylvania and grew up in Paterson, New Jersey. He graduated from Paterson State College (now William Paterson University) with a B.A. in elementary education social studies in 1965, then worked as a teacher for one year before taking a position at the Office of Naval Intelligence. Pistone joined the FBI in 1969; after serving in a variety of roles, he was transferred to New York in 1974 and assigned to the truck hijacking squad.

His ability to drive 18-wheel trucks and bulldozers led to being chosen for what would become his first undercover operation, infiltrating a gang stealing heavy vehicles and equipment. His penetration of the group led to the arrest of over 30 people along the Eastern Seaboard in February 1976 - described at the time as one of the largest and most profitable theft rings ever broken in America. The name Donald ("Donnie") Brasco was chosen to be Pistone's alias.

Pistone was selected to be an undercover agent because he was of Sicilian heritage, was fluent in Italian and was acquainted with the mob from growing up in New Jersey. He also said that he did not perspire under pressure and was aware of the Mafia's codes of conduct and system. The operation was given the code name "Sun-Apple" after the locations of its two simultaneous operations: Miami ("Sunny Miami") and New York ("The Big Apple"). After extensive preparation including FBI gemology classes and again using the alias Donnie Brasco, he went undercover as an expert jewel thief.

In September 1976, Pistone walked out of the FBI office and did not return for the next six years. The FBI erased Pistone's history and anyone who called asking for him would be told that no one by that name was employed there. His co-workers, friends and informants had no idea what had happened to him. Pistone stated that it was not the original aim to penetrate the Mafia; rather, the focus was to be on a group of people fencing stolen property from the large number of truck hijackings taking place each day in New York (five to six a day). It was intended that the undercover operation last for around six months. 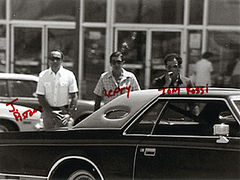 At the same time Pistone was investigating the Bonanno crime family, Bob Delaney of the New Jersey State Police, under the ruse of "Bobby Covert" and also known as "Bobby Smash", began investigating the New Jersey organized crime scene. He maintained during the investigation an open association with the crime families who would alleviate their business pressures from the unions for a price. The two met through Colombo crime family caporegime Nicholas Forlano, although at the time, neither man knew that the other was working undercover.

Pistone became an associate in Jilly Greca's crew from the Colombo family. Greca's crew was involved mostly in truck hijacking and selling stolen merchandise. Since only a few people knew of Pistone's real identity, FBI and NYPD investigations had Pistone down as an actual Mafia associate called Don Brasco. He later moved to the Bonanno family and subsequently developed a close relationship with Anthony Mirra, Dominick "Sonny Black" Napolitano and was tutored in the ways of the wise guy by Bonanno soldier Benjamin "Lefty Guns" Ruggiero. It was by doing this that Ruggiero inadvertently provided much evidence to Pistone, as Mafia members will not normally talk to non-members about the inner workings of the Mafia. Ruggiero became very close friends with Pistone and told him that he would "die with him".

Pistone was responsible for a lucrative business venture in Holiday, Florida, when he opened and operated the King's Court Bottle Club. In Florida, Pistone worked with another FBI agent working undercover as Tony Rossi. Pistone stated that he would have become a made member of the Bonanno family if he had murdered capo Philip Giaccone in December 1981. The hit was called off, but Pistone was later contracted to murder Alphonse "Sonny Red" Indelicato's son, Anthony "Bruno" Indelicato, who previously evaded a meeting which left Indelicato, Giaccone and Dominick Trinchera dead.

Pistone's operation was ordered ended after six years undercover. He wanted to continue at least until he became a made man, arguing that the FBI could humiliate the Mafia and destroy the myth of its invincibility by revealing that an agent had been inducted into the ranks. However, Pistone's superiors decided that the operation was becoming too dangerous and set an end date of July 26, 1981. Only after Pistone departed did FBI agents Doug Fencl, Jim Kinne and Jerry Loar inform Napolitano and Ruggiero that their longtime associate was an FBI agent.[5]

Shortly thereafter, Napolitano was murdered for having allowed an FBI agent to infiltrate the family; he was shot dead and his hands were cut off.[6] Anthony Mirra, who initially brought Donnie Brasco to the family, was killed. Ruggiero was to be killed as well, but was arrested by the FBI while on his way to a meeting, in order to prevent his death.[6] Napolitano's girlfriend Judy later contacted Pistone and told him, "Donnie, I always knew that you weren't cut out for that world because you carried yourself different, you had an air of intelligence, you know? I knew that you were much more than just a thief. You were a good friend to Sonny and me. Sonny didn't have any ill feelings toward you."

The Mafia put out a $500,000 open contract on Pistone. FBI agents visited Mafia bosses in New York and told them not to even bother with the contract. The evidence collected by Pistone led to over 200 indictments and over 100 convictions of Mafia members. Bonanno boss Joseph Massino was convicted in 2004 of ordering Napolitano to be killed for allowing Pistone into the family. The infiltration of Donnie Brasco became somewhat of a blessing in disguise for the Bonanno family. When the Mafia Commission Trial indicted the New York crime families, the Bonannos escaped conviction due to the fact that the family had been kicked out of the Mafia Commission, because of the Donnie Brasco operation. By dodging this bullet, the family kept its leadership intact and was able to consolidate its power once again.

Pistone still travels disguised, under assumed names and with a license to carry a firearm. He will not set foot in any location with high Mafia presence. However, in the book Unfinished Business, he said that he went to New York while working as a consultant on the movie Donnie Brasco and mentions that some people recognized him. Pistone continues to be active as an author and consultant to worldwide law enforcement agencies, including Scotland Yard,[7] and has been called to testify before the United States Senate as an expert on organized crime.[8]

Pistone detailed his undercover experience in his 1988 book Donnie Brasco: My Undercover Life in the Mafia. The book was the basis for the critically acclaimed 1997 film Donnie Brasco, starring Johnny Depp as Pistone and Al Pacino as "Lefty" Ruggiero, and for the short-lived 2000 TV series Falcone, starring Jason Gedrick as Pistone (whose mob alias was changed from "Donnie Brasco" to "Joe Falcone" for copyright reasons). Pistone was a consultant on Donnie Brasco and made sure that all the portrayals and settings were accurate.

Pistone revisited his experiences as Donnie Brasco in his books The Way of the Wiseguy (2004) and Donnie Brasco: Unfinished Business (2007).[9] Pistone wrote a novel titled, The Good Guys, with Joseph Bonanno's son, Salvatore "Bill" Bonanno. He has also written several works of fiction such as Deep Cover, Mobbed Up and Snake Eyes. He has served as an executive producer on movies relating to the Mafia, including the 2006 film 10th & Wolf.[6] In 2008, Italian artist Rossella Biscotti interviewed Pistone in her video The Undercover Man. A play based on Donnie Brasco opened at the Pennsylvania Playhouse.[10][11]