Ice hockey has existed on and off as both a club and varsity sport at Notre Dame since 1912. In 1968, the Fighting Irish started playing again at the Division I level as an independent. In 1971, the team joined its first conference, the Western Collegiate Hockey Association (WCHA). The team continued playing in the WCHA for a decade until moving to the Central Collegiate Hockey Association (CCHA) with the conference's three Michigan schools in 1981.[1] 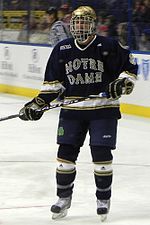 Notre Dame hockey player in an away uniform (2010).

The Fighting Irish lasted only two years in the new CCHA, after designating Ice Hockey as a club sport for the 1983-1984 season the team played in the Central States Collegiate Hockey League (CSCHL). Notre Dame finished that season second in the CSCHL with a record of 13-2-0.[2] In 1984-1985 Notre Dame Hockey was once again elevated to varsity status with the team playing as a Division I independent. In 1992 Notre Dame rejoined the CCHA. The Irish struggled to remain competitive in the CCHA, but began to improve under head coach Dave Poulin. In 2004, Poulin led the team to its first ever NCAA Tournament. However, the year after was drastically different. 2005 was the worst season in Notre Dame history. The five-win campaign resulted in the resignation of coach Poulin.[1]

Jeff Jackson and coaching staff look on as Notre Dame celebrates a goal (2010).

In 2005, Jeff Jackson took over as head coach. Jackson, who had already won two national championships at Lake Superior State University, had an immediate impact at Notre Dame. In his first season with the Irish, the team greatly improved upon the five-win season, boosting its record to 13-19-5.[1] 2007 was even more successful. The Irish achieved their first ever number one ranking in both the Uscho.com and USA Today Polls and their first number one seeding for the NCAA Tournament. The following year, the Irish finished fourth in both the CCHA's regular season and playoffs, and again made the NCAA Tournament. Once there, the Irish went on to beat top-seeded New Hampshire 7-3 and third-seeded Michigan State 3-1 to advance to the Frozen Four for the first time in school history. From there, they defeated first-seeded Michigan in overtime to advance to the national title game, ultimately losing to Boston College 4-1.[3] Notre Dame also became the first four-seed to advance to the national semifinals, and eventually to the national title game since the new 16-team format was introduced in 2003.[3] In the 2008-2009 season, the Irish added another CCHA regular season title and a CCHA Tournament title, defeating Michigan 5-2 in the title game. Notre Dame advanced to the 2009 NCAA Tournament where the Irish was upset by 16th seeded Bemidji State 1-5.[4]

The following season, Notre Dame finished with a record of 13-17-8 and ended the season after being swept by Ohio State two games to none in the three game opening round series of the CCHA Playoffs.[5][6] The Irish rebounded in the 2010-11 regular season at 23-13-5, and clinched their second trip to the Frozen Four in program history by defeating New Hampshire 2-1 in the Northeast Regional Final. The Fighting Irish faced the East Regional Champion Minnesota-Duluth in the National Semifinals. The Irish fell to the eventual national champion 3-4.[7]

Over 100 Fighting Irish alumni have gone on to play professional ice hockey, including a number of current and former NHL and WHA players:[9]

In February 2009, The University of Notre Dame announced it will begin construction on a new, freestanding, on-campus ice arena designed to meet the needs of both the Irish hockey team and the local community.[10] Construction began on March 15, 2010 on the projected 5,000-seat arena with the venue scheduled to be ready for the 2011-12 season in October 2011.[11] The new ice arena is located south of the Joyce Center, just north of Edison Road, and just west of where the new Irish track and field facility is being constructed. The majority of the general public arena seating will be of the chair-back variety.[12]

The Compton Family Center replaced the rink inside the Edmund P. Joyce Center. Durith the time that the Irish played at the Joyce Center, the facility was the second smallest home rink in the CCHA with a hockey capacity of 2,857. All seats were benches without chair backs, and most of the seating consists of temporary bleachers. In 2007, the Irish compiled an impressive 14-2-2 home record at the Joyce Center.