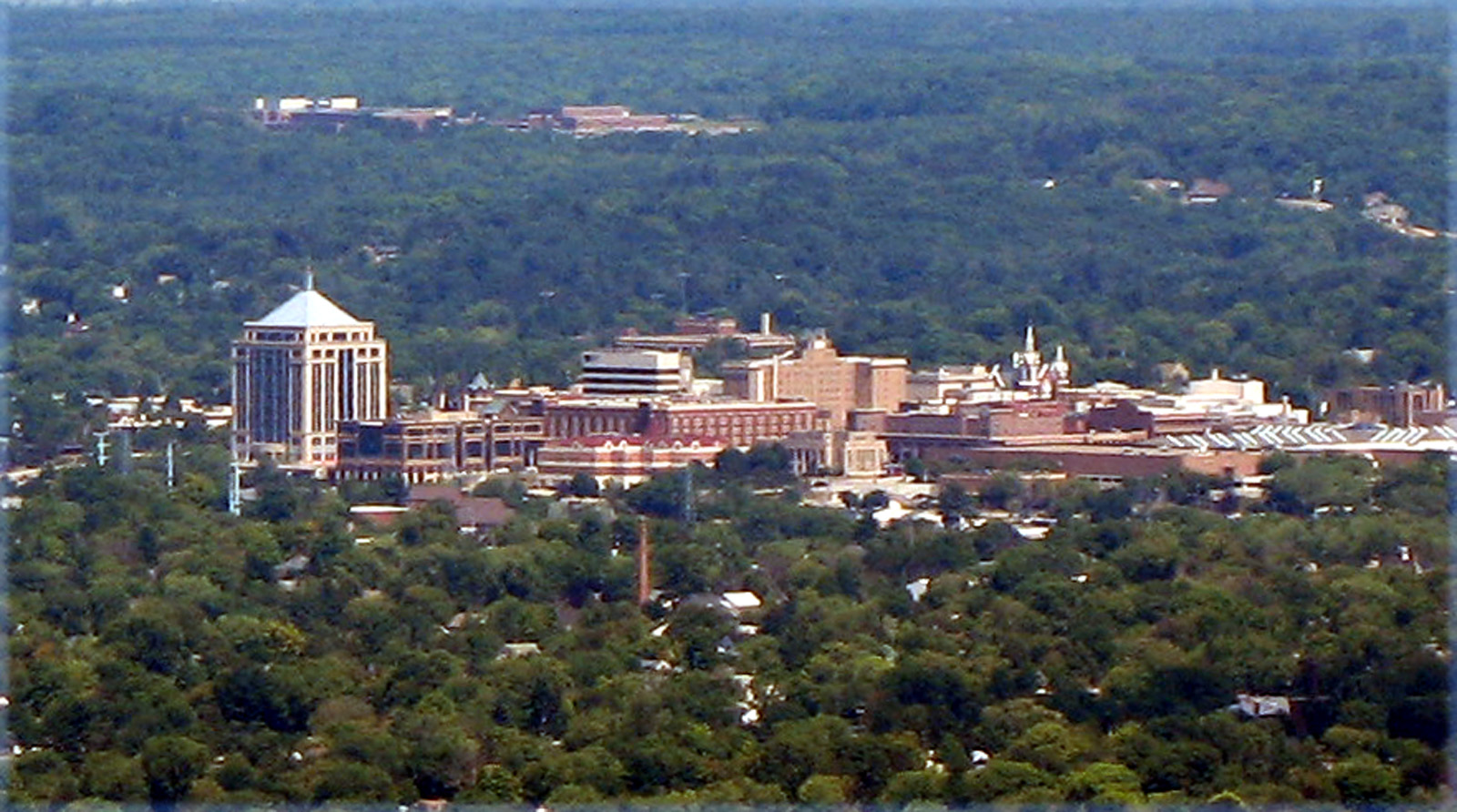 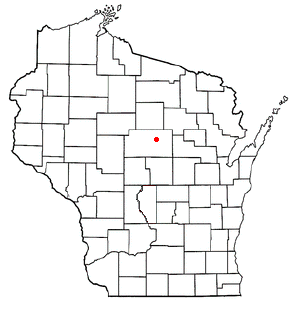 Wausau (pronounced /wô'sô/) is a city in and the of Marathon County, , . The city is located at an altitude of 364.2 meters (1,195 ft). The divides the city. Wausau is convert|180|mi|km east of Minneapolis, Minnesota. The city is located adjacent to and partially surrounded by the town of Wausau. According to the 2000 census, Wausau had a population of 38,426 people.

Wausau is the of the Wausau (MSA), which includes all of Marathon County and had a population of 125,834 at the 2000 census. Besides Wausau, other significant communities in the metropolitan area include Schofield, Rothschild, Weston, Kronenwetter, and the town of Rib Mountain. It is the 297th largest MSA in the United States.

The is what first drew settlers to the area during the mid-1800s. Known as Big Bull Flats or Big Bull Falls by the original French explorers. The long rapids created many bubbles (bulle, in French). A treaty was formed with the Indians in 1836 that transferred land to federal ownership. The current name of the city is Wausau, pronounced "Waasaa", meaning "a faraway place" or "a place which can be seen from far away" in the .

George Stevens, who lent his name to Stevens Point about half an hour's drive south of Wausau, in 1840 began processing the pine forests into . Subsequently, other sawmills along the Wisconsin River began to spring up as well.

By 1846, arrived and took the lead in the local business and community. His efforts helped, in part, to establish Marathon County in 1850.

By 1852, Wausau had been established as a town and continued to grow and mature. German immigration into the area brought more people, and by 1861, the town was incorporated as a .

Churches, schools, industry and social organizations began to flourish with the State of Wisconsin granting the now a charter in 1872, with elections to be held the first Tuesday in April. The residents elected August Kickbusch as their first mayor.

When the arrived in 1874, Wausau was even more accessible to people and industry, still mostly focused on lumber production. This technology allowed the city to continue to grow and flourish, even as other villages and towns in the area were forced to close due to the rapidly vanishing forests and closing of the lumber mills.

Wausau's favorable location on the Wisconsin River was partly responsible for the city's survival. Furthermore, the economy was being reformed and diversified in the early 1900s by an insurance group who would later be known as the or Wausau Insurance Companies. Its logo, first introduced in 1954, was the downtown Milwaukee Road railroad depot, which was set against the backdrop of the community's skyline. This company put Wausau in the minds of people across the country.

The in 1929 had a major effect on the Wausau area. Many industries were forced to cut back by laying off and dismissing workers or by closing all together. After decades of positive growth, the city had virtually ground to a halt. However, under the , Wausau was heavily modernized. And after , the city once again continued to grow, in industry, education, recreation, and retail more so than population.

By the middle and late 1990s, the city of Wausau began to purchase and develop more of the to meet the needs of the expanding economy and companies.

In the late 1990s, the city tore down a number of aging buildings on a square in the center of downtown and created what is known locally at the 400 Block, an open, grassy block with paved sidewalks criss-crossing it. The square is a focal point for summer festivals and lends a certain charm to the city's quaint downtown district.

By the end of the 20th century, the [http://www.ci.wausau.wi.us/infosubcon.asp?dep=3&tid=9&sid=59| Wausau City Council] had begun to implement the Redevelopment Plan, or the [http://www.ci.wausau.wi.us/is/wpl/pdf/masterplan.pdf Wausau Central Business District Master Plan] . This included redevelopment and economic structuring of downtown Wausau. Significant [http://www.numbersusa.com/interests/ordeal.html school construction] in recent years has occurred in response to changing demographics.

According to the , the city has a total area of 17.8 square miles (46.0 km²), of which, 16.5 square miles (42.7 km²) of it is land and 1.3 square miles (3.3 km²) of it (7.15%) is water. Interesting to note is that Wausau is very close to being at the very center of the northern half of the western hemisphere. Just west of Wausau, 45 degrees latitude meets 90 degrees longitude, which is exactly halfway between the Equator and the North Pole and a quarter of the way around the world from the .

Wausau's climate is classified as being halfway between temperate and subarctic ( and ). Wausau is built on or around a hemiboreal forest which has some of the characteristics of a boreal forest. Furthermore, they also share some of the features of the temperate-zone forests to the south. Coniferous trees predominate in the hemiboreal zone, but a significant number of deciduous species will be found there as well.

Wausau has a mayor-council form of government. Twelve elected alderpersons compose the city council, each representing one district of the city.

Nearly one third of the Marathon County economy is manufacturing-based and the balance of service and industry provides a stable and productive . Furthermore, the Wausau region has a consistently lower than average unemployment rate and continues a steady growth in job creation and economic viability among manufacturers and service providers alike. Wausau has twelve s with 41 different branch locations, three trust companies and three holding companies located in metropolitan area. Furthermore, there are thirteen open membership s with eighteen branch locations. Prominent industries of Wausau include paper manufacturing, insurance, home manufacturing, and tourism.

The Wausau area is also a center for cultivation of .

Wausau is also known for its red granite, which is mined nearby.

Wausau used to be the headquarters of Wausau Insurance, which is now Liberty Mutual. They have a regional office in Wausau. For several years, Wausau had TV ads stressing the confusion between Warsaw and Wausau. 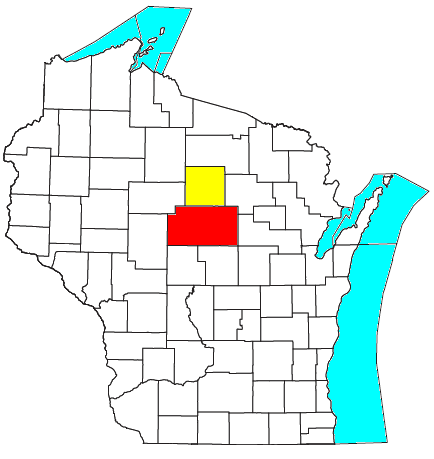 There were 15,678 households out of which 27.8% had children under the age of 18 living with them, 46.7% were married couples living together, 9.5% had a female householder with no husband present, and 40.5% were non-families. 33.6% of all households were made up of individuals and 14.1% had someone living alone who was 65 years of age or older. The average household size was 2.37 and the average family size was 3.08.

Wausau is home to the , and the , a 2-year college which feeds the University of Wisconsin system. A major 4-year college is located in , about convert|30|mi|km south of Wausau.

Public schools located in the city are part of the . The main dividing line used to place students is the Wisconsin River which runs north to south through the city. The Wausau School District has fourteen elementary schools, two middle schools, and two high schools. The sports teams are the Lumberjacks and the [http://www.wausau.k12.wi.us/west/] sports teams are the Warriors.

The Marathon County Public Library (MCPL) - Wausau Headquarters (online at [http://www.mcpl.us/ www.mcpl.us] ) is the largest library in the Wausau area and is located downtown, near the , at 300 North First Street. The MCPL - Wausau Headquarters was formed when the County and City libraries merged in 1974, and it serves as the headquarters for the system, which encompasses all public libraries in , including eight branch libraries located in Athens, Edgar, Hatley, Marathon, Mosinee, Rothschild, Spencer, and Stratford.

The MCPL - Wausau Headquarters is open seven days a week (six days a week between Memorial and Labor Day) and serves a population of 126,031. Free Internet access is available, including wireless access (). Many of the Library's extensive electronic resources, including its online library catalog ( [http://vcat.wvls.lib.wi.us/ V-Cat] ), are available online at [http://www.mcpl.us/ www.mcpl.us] .

The city's parochial schools are known as the . These include at St. Anne, St. Michael and St. Mark, at St. Matthew's, and Newman Catholic High School. Newman High's sport teams are the Cardinals. Trinity Lutheran is a Missouri-synod-Lutheran grade school.

The are a team that plays in the , an NCAA summer baseball league. Their home games are played at the Athletic Park in Wausau.

offers downhill skiing in nearby Rib Mountain. The convert|700|ft|m|sing=on mountain is the highest skiable mountain in the state and offers the second highest vertical drop in the Midwest. It first became a ski area in 1937, when Wausau residents cleared six runs by hand, installed the nation’s longest ski lift and built the chalet with stone quarried nearby. The newly remodeled historical chalet includes an upstairs lounge with views of the mountain and features live music every Saturday night. Today, Granite Peak has 74 runs and 7 ski lifts. Granite Peak earned Ski Magazine’s #1 ranking in Wisconsin, Upper Michigan and Minnesota.

Wausau is also home to a world-class course, having hosted numerous regional, national, and world competitions over the last two decades.

The only main local daily newspaper is the "" [http://www.wausaudailyherald.com/] , with a daily circulation of 21,400 during the week and a circulation rate of 27,500 for the Sunday paper. "City Pages" is a smaller freely distributed weekly newspaper. "" is a monthly newspaper that reports on local business.

Wausau is home to the , famous for its "Birds in Art" collection as well as Leigh Yawkey Woodson's heirloom collection of decorative glass.