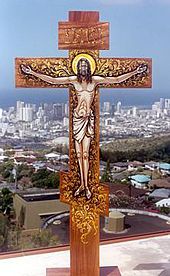 Orthodox Christianity in Hawaii began with early Russian missions of the 19th century and continues with multiple Orthodox churches in the Hawaiian islands.

The first Christian service of any type in Hawaii was a lay funeral service conducted by Captain James Cook for an English sailor at Kealakekua Bay on the Big Island of Hawaii in 1779.

The first Christian liturgical service held in Hawaiʻi was a Russian Orthodox celebration of Pascha (Easter). Sometime between 1750 and 1793, while traveling from the Far East to what was then Russian America, a Russian trading ship stopped over in the Hawaiian Islands. The Russian Orthodox priest, not wanting to celebrate Pascha at sea, instructed the captain to disembark. The captain told the priest he feared the "natives" but the priest responded, "They will not harm us, for we are Orthodox, and we bear the Light of Christ to illumine their hearts." They disembarked and blessed a temporary altar under a newly built temple made out of palms and bamboo and adorned with a Our Lady of the Sign icon of the Theotokos (Mother of God) and the Christ Child. It was rumored that as they departed the priest left the icon used in the Paschal Divine Liturgy. The ship's priest promised that, "We shall return and baptize these natives to the One, Holy, Catholic, and Apostolic Church."

In 1815, Russians built Hawaii's first Orthodox church: the Russian Orthodox chapel at Fort Elizabeth, coordinates 21°57′6″N 159°39′51″W﻿ / ﻿21.95167°N 159.66417°W﻿ / 21.95167; -159.66417. On the island of Kauaʻi, three Russian forts were built: Fort Alexander, Fort Barclay, and Fort Elizabeth. Fort Alexander also housed a small Orthodox chapel, but Fort Elizabeth was the trading base for the new Russian-American Company in Hawaii. When King Kaumualiʻi of Kauaʻi ceded his kingdom to King Kamehameha I in 1816 following the Tsar Alexander I's refusal to annex Kauaʻi due to political troubles in Russia, the forts were also ceded, and the Hawaiian Islands become one unified kingdom. The chapels ultimately fell into disrepair after Calvinist missionaries from the United States landed in 1820.

In 1882, the Kingdom of Hawaii sent a diplomatic delegation to St. Petersburg, Russia, to witness the coronation of Tsar Alexander III. The reports of Hawaii's special envoy to the Russian court, Colonel Curtis ʻIaukea, Secretary of Foreign Affairs for the Kingdom of Hawaiʻi, regarding the Russian Orthodox liturgical services were widely published in Hawaiian language newspapers. Two years later, Tsar Alexander III sent King Kalākaua the Imperial Order of St. Alexander Nevsky, the highest Russian award, and established a permanent Russian embassy in Hawaii, along with a very small Orthodox chapel. Subsequently, 200 Ukrainians were imported as laborers by American sugar planters.

In 1893, Queen Liliʻuokalani was deposed by U.S. Marines and American sugar plantation owners who were mostly the children of American Calvinist missionaries, and a provisional government was installed (see Overthrow of the Kingdom of Hawaii). In 1898, Hawaii was annexed by the United States of America. In the early 1900s, the Russian ambassador was recalled, the embassy was moved to a small office, and the Russian Orthodox chapel was closed.

Saint Innocent of Alaska also made a brief stop-over in Hawaii during his travels from Asia to Western America.

On November 27, 1910 (O.S., the Feast Day of the Znamenny-Kursk Root Icon of the Sign of the Mother of God), reader services were organized and served by Vasily Pasderin.

In 1915, after the Russian Orthodox community in Hawaii (and the Episcopal Bishop Henry B. Restarick) sent an official request by to the Holy Governing Synod in St. Petersburg, a priest was dispatched (with the blessing of Archbishop Evdokim (Meschersky) of the Aleutians) to pastor the large population of Orthodox Russian faithful. He establishsed permanent liturgical services in Hawaiʻi and on Christmas December 25 (O.S.) / January 7 (N.S.), 1916, Protopresbyter Jacob Korchinsky celebrated the Divine Liturgy at Saint Andrew's Episcopal Cathedral in Honolulu. Thus Orthodoxy was re-established in Hawaii.

St. Andrew's Episcopal as it appears today in downtown Honolulu

Fr. Jacob, a well-known missionary priest, established churches in Canada, the United States, Alaska, Australia and the Philippines. He was murdered in Odessa shortly after the Bolshevik Revolution in Russia, but has not yet been officially recognized as a martyred saint (though, for martyrs, no official canonization is necessary in the Orthodox Church).

St. Tikhon of Moscow once quoted Fr. Jacob's missionary exploits this way, "He did much to convert the heathen to the Christian Faith and returned many Uniates to the Orthodox Church. He set the foundation for parish life in many places, built churches and assisted the unfortunate with his acquied medical knowledge."[1]

In subsequent years, the Russian Orthodox Church shipped or flew priests to Hawaii to care for the dwindling Orthodox population, becoming part of the Russian Orthodox Church Outside Russia (ROCOR). Archimandrite Innokenty Dronov of Hilo, a contemporary of St. Jonah of Manchuria and St. John of Shanghai and San Francisco and Metropolitan Meletius of Harbin, served the entire Orthodox Christian flock on all the Hawaiian Islands throughout the 1930s and 1940s. Fr. Innokenty had a large following of Japanese Orthodox Christians. He frequently returned to the Diocese in San Francisco to report to Archbishops Apollinary (Koshevoy) and Tikhon (Troitsky) and for medical reasons. He is now purportedly buried on the Big Island of Hawaiʻi.

Until the 1960s, the Russian Orthodox Church was the only Orthodox jurisdiction in the islands. Following the 1960s, parishes from three other jurisdictions established themselves in the Islands: Greek, Serbian, and OCA. At one point there were as many as five different Orthodox jurisdictions in the Hawaiian Islands. Despite this multiplicity of jurisdictions, all Orthodox churches in Hawaii are in communion with one another and have friendly relations. (See also: Orthodoxy in America, Diaspora.)

Archbishop Kyrill on an archpastoral visit to Hilo, Kona and Honolulu in 2003

In the early 1990s, a Serbian community established a Serbian Orthodox mission dedicated to St. Lazar of Kosovo. The Serbian mission later became inactive, and its remaining members joined the local Russian and Greek churches. There has been a recent interest within the Serbian Orthodox community in Hawaiʻi to re-establish this mission. In recent months, visiting clergy (including the Serbian Bishop Maxim of Western America) have come from the mainland to minister to them.

In 2003, the short-lived St. Paul the Apostle Antiochian Orthodox Mission was established in Honolulu at Fort Shafter Army Base. The rector of this mission was Fr. Isaiah Gillette, a chaplain with the military. Following Fr. Isaiah's transfer to Texas, the mission was disbanded. There is currently a small community under the care of a priest from the Antiochian Orthodox Church, who visits Oʻahu on a regular basis.

In early 2004, a new Orthodox community under the jurisdiction of the Orthodox Church in America (OCA) was established in Kona. Fr. Sergius Naumann served this community for a time until leaving for Alaska. They were without a priest for about 18 months. In Autumn, 2007 the community was given the name of St. Juvenaly — the first Orthodox Church to have St. Juvenaly as their patron. The mission is under the auspices of Bp. Benjamin (Peterson) of the West (OCA).