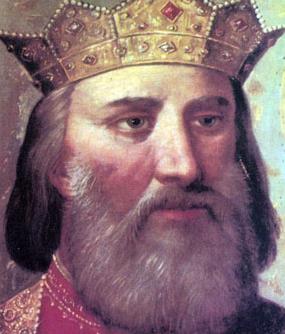 Lazar was born in (close to ) in 1329, the son of imperial chancellor Pribac Hrebeljanović to a family originating for the coastal clan. He was educated at Tzar Dušan's court in . He was later promoted to "knez" by Dušan's successor Tzar Stefan Uroš V. Despite his imperial title, Uroš was a weak and ineffectual leader, allowing local nobles to gain power and influence at the expense of the central authority.

Lazar left Prizren in the early , and devoted himself to the consolidation of his power in the northern Serbian regions around his court in . Although a pledged vassal to Stefan Uroš, in he refused to participate in the , at which the bulk of the imperial n army was destroyed by an Ottoman force. Soon afterwards, Stefan Uroš died. He had been the last of the emperors. Through a combination of diplomacy, military action, and family alliances, Lazar emerged from the resulting power vacuum as the most powerful Serbian noble not in the Ottomans' service. He acquired dynastic legitimacy by marrying , and despite retaining only the minor title of knez, he nevertheless used the imperial name of 'Stefan' as well as the designation "". At the same time, he took no issue with Bosnian ban (whose lineage was in any case much stronger than Lazar's) proclaiming himself "King Stefan of Serbs and Bosnia". In this way Lazar could retain the de facto power, while ceding only a ceremonial title to Tvrtko, who never managed to revive the old Nemanjić institutions of central power.

The first mention of any Ottoman movement into Lazar's territory is from a chronicle entry of , when two of Lazar's subjects, Vitomir and Crep, defeated the Turks on the River near Paracin. After that there is no record of any hostility between Lazar and the Turks until 1386.Lazar mobilized several other Serbian nobles, including Tvrtko, King of Bosnia, and in 1386. smashed Murat's general Timurtash at , forcing the Ottomans south to Nis

Around Lazar founded the monastery of and around . By he was raising a massive force to meet the invading forces of the Ottoman Empire, which would include every Serbian in his kingdom. The two large forces met in the 1389 , and Lazar was one of those killed during that battle, along with much of Serbia's political elite.

Following Lazar's death, his widow assumed control of . Lacking in or economic strength, she pledged suzerainty to 's successor, his son Bayezid, who had taken as his wife the daughter of Lazar. Meanwhile, Milica turned to internal matters, where she dealt with her few remaining political opponents. It was her propaganda campaign, via the epic poetry composed at her court, that resulted in Lazar's quick , and the subsequent portrayal of their son-in-law as the traitor responsible for the Serbian defeat.

In Serbian , Lazar is said to have been visited by an angel of on the night before battle, and offered a choice between an earthly or a Heavenly kingdom, which choice would result in a peaceful capitulation or bloody defeat, respectively, at the .

::"... then appeared as a gray to Lazar, bearing a letter from the that told him the choice was between holding an earthly kingdom and entering the kingdom of heaven..." [http://www.archaeology.org/9909/etc/insight.html]

Lazar opts for the Heavenly kingdom, which will last "forever and ever" ("Perishable is earthly kingdom, but forever and ever is Kingdom of Heaven!" - Serbian: "Земаљско је за малена царство, а Небеско увијек и довијека!"), but has to perish on the battlefield. “We die with Christ, to live forever”, tells he to his soldiers. That Kosovo’s destination and that Testament, it is a union which Serb people made with God – and sealed it with martyrs’ blood. On Kosovo Serbs voted with their souls for Kingdom of Heaven and that was and has been their right destination. Since then all Serbs truthful to that Testament are becoming people of God, Christ’s New Testament nation, heavenly Serbia, part of God’s New Israel.This is why sometimes refer to themselves as the people of Heaven ("Небески народ").

Lazar married Milica (Cyrillic: Милица) in around and issued at least seven children: