Digit ratio
Not to be confused with Benford's law about the frequencies of leading digits of numbers. 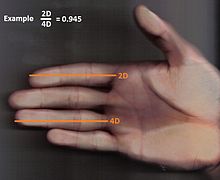 Hand with index finger being shorter than the ring finger, resulting in a small 2D:4D ratio, pointing to a high exposure to testosterone in the uterus.

The digit ratio is the ratio of the lengths of different digits or fingers typically measured from the bottom crease where the finger joins the hand to the tip of the finger. It has been suggested by some scientists that the ratio of two digits in particular, the 2nd (index finger) and 4th (ring finger), is affected by exposure to androgens e.g. testosterone while in the uterus and that this 2D:4D ratio can be considered a crude measure for prenatal androgen exposure, with lower 2D:4D ratios pointing to higher androgen exposure. The 2D:4D ratio is calculated by measuring the length of the index finger of the right hand, then that of the ring finger, and dividing the former by the latter. A longer index finger will result in a ratio higher than 1, while a longer ring finger will result in a ratio of less than 1.

A number of studies have shown a correlation between the 2D:4D digit ratio and various physical and behavioral traits.

That a greater proportion of men have shorter index fingers than ring fingers than do women was noted in the scientific literature several times through the late 1800s,[1][2] with the statistically significant sex difference in a sample of 201 men and 109 women established by 1930,[3] after which time the sex difference appears to have been largely forgotten or ignored. In 1983 Dr Glenn Wilson of King's College, London published a study examining the correlation between assertiveness in women and their digit ratio.[4] This was the first study to examine the correlation between digit ratio and a psychological trait within members of the same sex.[5] Wilson proposed that skeletal structure and personality were simultaneously affected by sex hormone levels in utero.[4] In 1998, John T. Manning and colleagues reported the sex difference in digit ratios was present in two-year-old children[6] and further developed the idea that the index was a marker of prenatal sex hormones. Since then research on the topic has burgeoned around the world.

A 2009 study in Biology Letters argues: "Sexual differences in 2D:4D are mainly caused by the shift along the common allometric line with non-zero intercept, which means 2D:4D necessarily decreases with increasing finger length, and the fact that men have longer fingers than women,"[7] which may be the basis for the sex difference in digit ratios and/or any putative hormonal influence on the ratios.

There is evidence that this reflects fetal exposure to the hormones testosterone[22] and estrogen.[citation needed]

Explanation of the digit ratio effect

It is not clear why digit ratio ought to be influenced by prenatal hormones. There is evidence of other similar traits, e.g. otoacoustic emissions and arm-to-trunk length ratio, which show similar effects. Hox genes responsible for both digit and penis development[25] have been implicated in this pleiotropy. Direct effects of sex hormones on bone growth might be responsible, either by regulation of Hox genes in digit development or independently of such genes. Likewise, it is unclear why digit ratio on the right hand should be more responsive than that on the left hand, as is indicated by the greater sex difference on the right than the left.[26]

Manning and colleagues have shown that 2D:4D ratios vary greatly between different ethnic groups.[27][28] This variation is far larger than the differences between sexes; in Manning's words, "There’s more difference between a Pole and a Finn than a man and a woman."[29]

Correlation between digit ratio and traits

Some authors suggest that digit ratio correlates with health, behavior, and even sexuality in later life. Below is a non-exhaustive list of some traits that have been either demonstrated or suggested to correlate with digit ratio.

There is some evidence that 2D:4D ratio may also be indicative for human development and growth. Ronalds et al. (2002) showed that men who had an above average placental weight and a shorter neonatal crown-heel length had higher 2D:4D ratios in adult life.[citation needed] Moreover, studies about 2D:4D correlations with face shape suggest that testosterone exposure early in life may set some constraints for subsequent development. Prenatal sex steroid ratios (in terms of 2D:4D) and actual chromosomal sex dimorphism were found to operate differently on human faces, but affect male and female face shape by similar patterns.[81] However, exposure to very high levels of testosterone and/or estrogen in the womb may have also negative effects. Fink et al. (2004) found that men with low (indicating high testosterone) and women with high (indicating high estrogen) 2D:4D ratios express lower levels of facial symmetry.[82]

It is generally assumed that creating cave art was a male behavior.[citation needed] 2D:4D is being used alongside other methods to help sex Palaeolithic hand stencils found in European and Indonesian caves.[83][84][85]