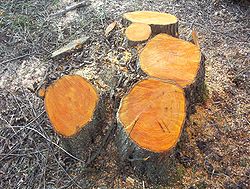 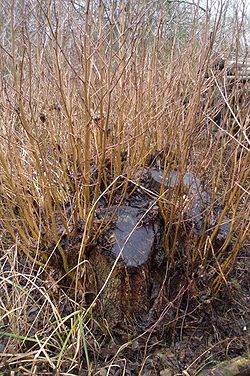 The same alder stool after one year's regrowth

Coppicing is a traditional method of woodland management which takes advantage of the fact that many trees make new growth from the stump or roots if cut down. In a coppiced wood young tree stems are repeatedly cut down to near ground level. In subsequent growth years, many new shoots will emerge, and, after a number of years the coppiced tree, or stool, is ready to be harvested, and the cycle begins again. (The noun "coppice" means a growth of small trees or a forest coming from shoots or suckers.)

Typically a coppiced woodland is harvested in sections or coups[1] on a rotation. In this way, a crop is available each year somewhere in the woodland. Coppicing has the effect of providing a rich variety of habitats, as the woodland always has a range of different-aged coppice growing in it, which is beneficial for biodiversity. The cycle length depends upon the species cut, the local custom, and the use to which the product is put. Birch can be coppiced for faggots (bundles of brushwood) on a three or four year cycle, whereas oak can be coppiced over a fifty-year cycle for poles or firewood.

Coppicing maintains trees at a juvenile stage, and a regularly coppiced tree will never die of old age—some coppice stools may therefore reach immense ages. The age of a stool may be estimated from its diameter, and some are so large—perhaps as much as 5.4 metres (18 ft) across—that they are thought to have been continuously coppiced for centuries.[2]

Coppiced stems are characteristically curved at the base. This curve occurs as the competing stems grow out from the stool in the early stages of the cycle, then up towards the sky as the canopy closes. The curve may allow the identification of coppice timber in archaeological sites—timber in the Sweet Track in Somerset (built in the winter of 3807 and 3806 BC) has been identified as coppiced lime.[3]

In the days of charcoal iron production in England, most woods in ironmaking regions were managed as coppices, usually being cut on a cycle of about 16 years. In this way, fuel could be provided for that industry, in principle, forever. This was regulated by a statute of Henry VIII, which required woods to be enclosed after cutting (to prevent browsing by animals) and 12 standels (standards or mature uncut trees) to be left in each acre, to be grown into timber. The variation of coppicing known as coppice with standards (scattered individual stems allowed to grow on through several coppice cycles) has been commonly used throughout the British Isles as a means of giving greater flexibility in the resulting forest product from any one area. Not only does the woodland provide the small material from the coppice but also a range of larger timber for jobs like house building, bridge repair, cart making and so on.

The shoots (or suckers) may be used either in their young state for interweaving in wattle fencing (as is the practice with coppiced willows and hazel) or the new shoots may be allowed to grow into large poles, as was often the custom with trees such as oaks or ashes. This creates long, straight poles which do not have the bends and forks of naturally grown trees. Coppicing may be practiced to encourage specific growth patterns, as with cinnamon trees which are grown for their bark.

Coppiced hardwoods were extensively used in carriage and shipbuilding, and they are still sometimes grown for making wooden buildings and furniture.

Diagram illustrating the coppicing cycle over a 7-20 year period

In southern Britain, coppice was traditionally hazel, hornbeam, beech, ash or oak, grown amongst oak or sometimes ash or beech standards. In wet areas alder and willows were used. These coppices provided wood for many purposes, especially charcoal which before coal was economically significant in metal smelting. A minority of these woods are still operated for coppice today, often by conservation organisations, producing material for hurdle-making, thatching spars, local charcoal-burning or other crafts. The only remaining large-scale commercial coppice crop in England is sweet chestnut which is grown in parts of Sussex and Kent. Much of this was established as plantations in the 19th century for hop-pole production (hop-poles are used to support the hop plant while growing hops) and is nowadays cut on a 12 to 18 year cycle for splitting and binding into cleft chestnut paling fence, or on a 20 to 35 year cycle for cleft post-and-rail fencing, or for sawing into small lengths to be finger-jointed for architectural use. Other material goes to make farm fencing and to be chipped for modern wood-fired heating systems.

In north-west England, coppice-with-standards has been the norm, the standards often of oak with relatively little simple coppice. After World War II, a great deal was planted up with conifers or became neglected. Coppice working almost died out, though a few men continued in the woods. A small, and growing, number of people make a living wholly or partly by working coppices in the area today.[4]

Withies for wicker-work are grown in coppices of various willow species, principally osier.

In France, chestnut trees are coppiced for use as canes and bâtons for the martial arts of the same name.

Some Eucalyptus species are coppiced in a number of countries.[5]

The Sal tree is coppiced in India. [6]

Sometimes former coppice is converted to high-forest woodland by the practice of singling. All but one of the regrowing stems are cut, leaving the remaining one to grow as if it were a maiden (uncut) tree.

The boundaries of coppice coups were sometimes marked by cutting certain trees as pollards or stubs. 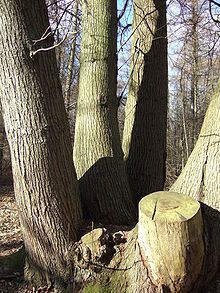 Coppice management favours a range of wildlife, often of species adapted to open woodland. After cutting, the increased light allows existing woodland-floor vegetation such as bluebell, anemone and primrose to grow vigorously. Often brambles grow around the stools, encouraging insects, or various small mammals that can use the brambles as protection from larger predators. Woodpiles (if left in the coppice) encourage insects such as beetles to come into an area. The open area is then colonised by many animals such as Nightingale, European Nightjar and fritillary butterflies. As the coup grows, the canopy closes and it becomes unsuitable for these animals again—but in an actively managed coppice there is always another recently cut coup nearby, and the populations therefore move around, following the coppice management.

However, most British coppices have not been managed in this way for many decades. The coppice stems have grown tall (the coppice is said to be overstood), forming a heavily shaded woodland of many closely spaced stems with little ground vegetation. The open-woodland animals survive in small numbers along woodland rides or not at all, and many of these once-common species have become rare. Overstood coppice is a habitat of relatively low biodiversity — it does not support the open-woodland species, but neither does it support many of the characteristic species of high forest, because it lacks many high-forest features such as substantial dead-wood, clearings and stems of varied ages. Suitable conservation management of these abandoned coppices may be to re-start coppice management, or in some cases it may be more appropriate to use singling and selective clearance to establish a high-forest structure.

Coppice and pollard growth is a response of the tree to damage, and such damage can occur naturally as well as from deliberate woodland management. Trees may be browsed or broken by large herbivorous animals, such as cattle or elephants, felled by beavers or blown over by the wind. Some trees, such as lime, may produce a line of coppice shoots from a fallen trunk, and sometimes these develop into a line of mature trees.

Artificial coppice may therefore be seen as a somewhat distorted equivalent to natural habitats which no longer occur, in the absence of now extinct or rare animals.