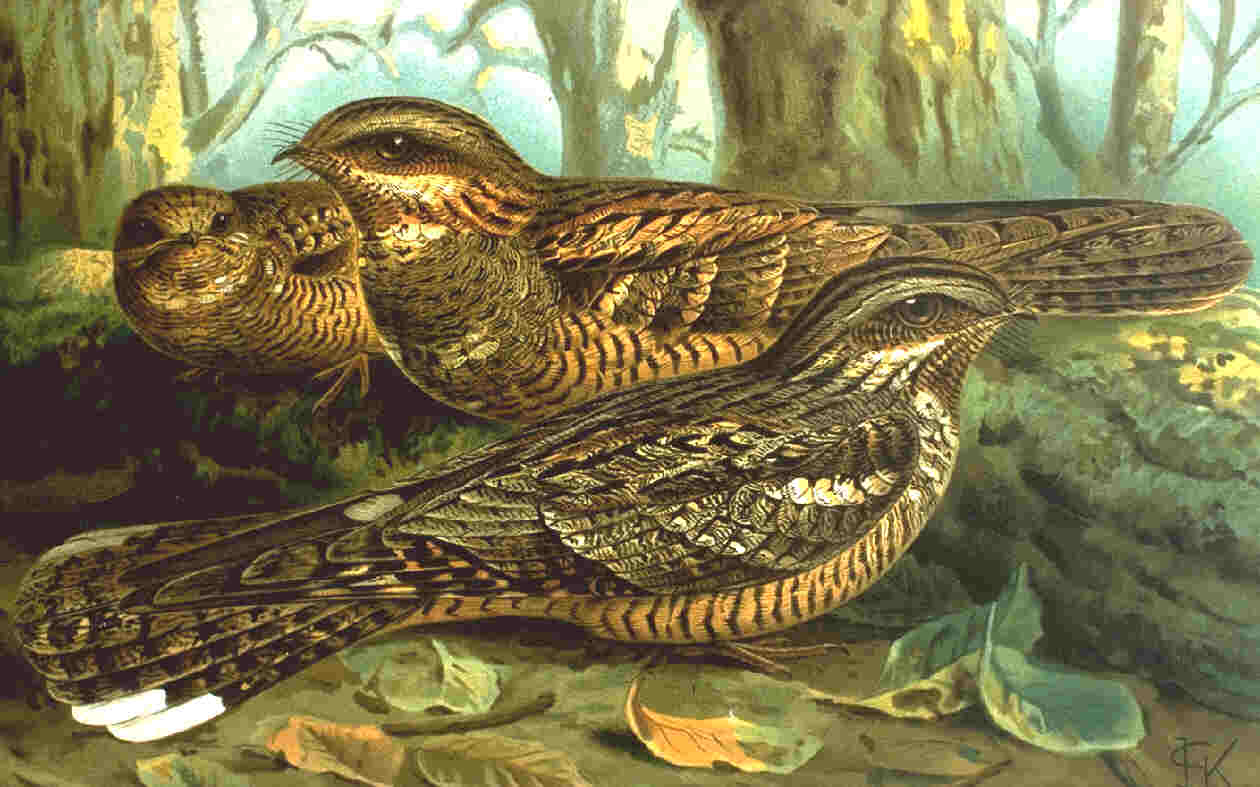 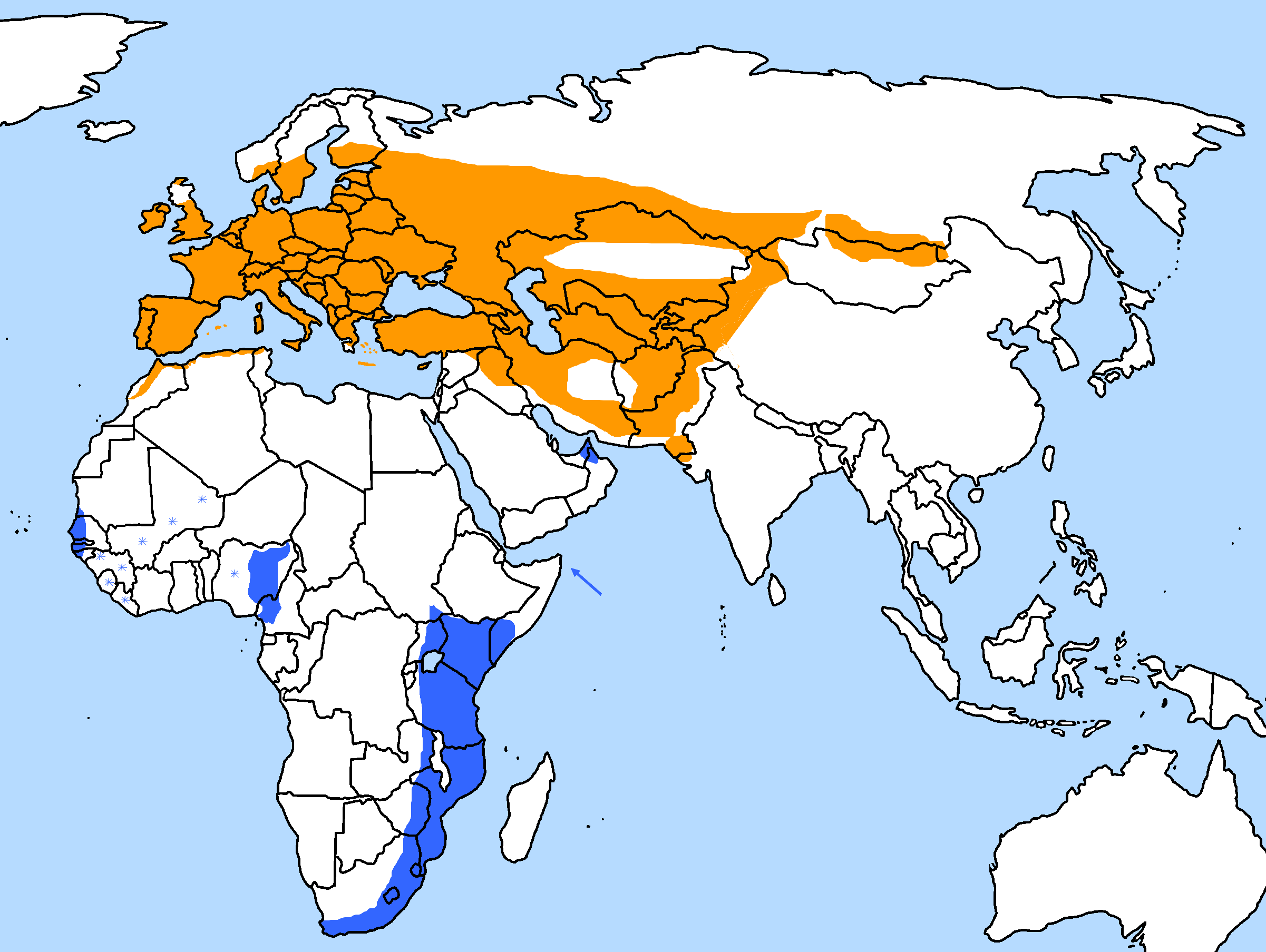 It is a late migrant, seldom appearing before the end of April or beginning of May. It occurs throughout northern and central Europe, and winters in , as far south as the Cape.

In southern Europe, and the warmer parts of Africa and Asia, it is replaced by other members of the nightjar family. In and it occurs in many suitable localities, but in the Shetlands and other northern islands it is only known as an occasional migrant.

Open heathy wastes, ,bracken-covered slopes and open woods are the haunts of the Nightjar.

The plumage of the adult Nightjar is lichen-grey, barred and streaked with buff, chestnut and black. The under parts are barred. White spots on primaries and white tips to the outer tail feathers are characters of the male; in the young male these are buff. The bill is black, the legs reddish brown.

The variegated plumage resembles that of the , its wide gape and long wings are like a ’s, and its soft downy plumage and nocturnal habits are akin to an s. The length is 26cm, and the wingspan 55cm.

The male may be told from the female by the white spots on his wings and tail, and as he gracefully floats above her, with wings upraised at a sharp angle, he spreads his tail wide to show the white spots. On the ground both birds will swing the tail from side to side when excited. The Nightjar does not hunt with open mouth, as often depicted, but the huge gape opens wide for large crepuscular insects, such as noctuid s and dor-beetles, which are snapped up with avidity. Crepuscular insects are its food.

Its song, from which it derives some of its common names, is a strange churring trill and is the surest means of identification. Its soft mechanical trill rises and falls as it vibrates on the variable evening breeze, or as the bird turns its head from side to side. The lower mandible vibrates and the throat is distended until the feathers stand out.

When it churrs the bird lies or crouches along a bough or rail, but it will sing from a post, and occasionally perch across a branch.

When on the wing it has a soft call, and a sharper and repeated alarm, "cuick, cuick", but during courtship, and occasionally at other times, it uses a mechanical signal, a sharp cracking sound, caused by clapping the wings together over the back.

The Nightjar flies at dusk, most often at sundown, a long-tailed, shadowy form with easy, silent -like flight; it's strong and deliberate wingbeats alternate with graceful sweeps and wheels with motionless wings.

During the day it lies silent upon the ground, often on a heap of stones, concealed by its plumage; it is difficult to detect, looking like a bit of lichen-covered twig or a fragment of bark. With eyes almost closed it watches through tiny slits, rising suddenly, sometimes with a croak of alarm, but usually silently, when almost stepped on.

Nightjars forage from dusk until dawn, catching moths and other large flying insects on the wing.

No nest is made - they occupy unvegetated gaps:

* - unvegetated gaps in deep heather in dry heath. This offers shelter and camouflage, and concealment from potential predators. Scattered trees are used to sing from, and to roost in.
* In conifer forest clearings, clearfells and restocks, especially those on former heathland, nightjars use vegetation structures that are very like that on heathland, as well as gaps in lying brash, for concealment.
* In coppice woods, nightjars nest in large recently cut coups (clearings), which remain suitable until the canopy closes, in about four to five years.

The two elongated and elliptical eggs, creamy white mottled with brown, purple and liver-colour are placed upon the bare ground amongst bracken or stones; the brooding bird, sitting closely, is their best protection. They are seldom laid before the end of May. The male occasionally broods. The female will "squatter" away to attract attention if disturbed, rolling and fluttering in a perfect frenzy.

They quickly become active and the parents soon remove them if the nest has been visited. At times a second brood is reared. Emigration begins in August, and by the middle of September most birds have left for the south.

There is good evidence that they can be disturbed by human activity, e.g. by their pet dogs, resulting in less chicks surviving.

* A good proportion of old mature heather with naturally occurring small gaps, located in areas that are free from disturbance
* A sparse scatter of trees as song/look out posts (10 trees perhectare) • Where mature or old heather is absent or scarce, dense bracken may provide alternativenest sites early in the breeding season but will quickly become overgrown and threaten any nearby heath. Avoid mechnical bracken control near where they might be nesting.• Manage access by providing defined paths that lead visitors away fromnightjar nesting areas

* Continuity of clear fells greater than 2 ha in size
* Create a waved/scalloped edge to the coup – this increases the length of foliage edge fornightjars to feed along.
* Delay restocking
* Manage access (see above)

* Continuity of cut coups greater than 2 ha in size
* Create a waved or scalloped edge to the coup – this increases the length of foliage edge for feeding along.
* Create and manage wide rides and glades throughout the wood, to provide foraging habitat – this will benefit other birds and wildlife

These lines are from the poem "Love in the Valley" by &mdash;

The similarity to the whirr of a spinning-wheel doubtless originated the old name "Jenny-spinner". The duration of the trill may be for a fraction of a minute or for several minutes without a pause. It is continued at intervals during summer, and occasionally may be heard in August and September, just before the bird departs.

Its rounded head and short beak, together with its mottled dress, give it a peculiar reptilian appearance; little wonder that one of its old names is "Flying toad." "Nighthawk" and "Fern-owl" are names derived from its habits, "Dorhawk" and "Moth-owl" from its food.

Its weird nocturnal note and silent ghostly flight have earned from the superstitious the name "Lich (corpse) Fowl" and "Puckeridge", and "Goatsucker" is due to wholly erroneous notions of its intentions when flying amongst animals.