Curlin (foaled March 25, 2004 in Kentucky) is an American Thoroughbred racehorse and the highest North American money earner with over US$10.5 million accumulated. His major racing wins include the 2007 Preakness Stakes, the 2007 Breeders' Cup Classic, and the 2008 Dubai World Cup.

Curlin was sired by Smart Strike, a former star from the Sam-Son Farm racing team in Ontario, Canada, and is a half-brother of 1991 Canadian Triple Crown winner Dance Smartly. He is out of the mare Sherriff's Deputy, a daughter of Canadian Horse of the Year and two-time North American Champion sire Deputy Minister.

The colt was named for Charles Curlin, an African American slave from western Kentucky who fought for the Confederate Army in the American Civil War. One of his original owners, Shirley Cunningham, Jr. through his interest in Midnight Cry Stables, is Charles Curlin's great-great-grandson.

In August 2008, Timeform assigned a 134 rating for Curlin, calling him the best horse in the world on dirt.

Kentucky-based class-action lawyers William Gallion and Shirley Cunningham Jr. bought Curlin for $57,000 as a yearling through their Midnight Cry Stable. They sold controlling interest (80%) in the horse in February 2007 for $3.5 million[1] to a group composed of Jess Jackson, founder of Kendall-Jackson wines; Florida software entrepreneur Satish Sanan's Padua Stables; and George Bolton, an investment banker from San Francisco.

Since August 2007, Gallion and Cunningham Jr. have been in a Boone County, Kentucky jail pending trial on charges of conspiracy, fraud, and forfeiture after they kept $64 million in misappropriated funds after representing 418 people in the suit over the diet drug fen-phen that resulted in a $200 million settlement.[2]

On November 1, 2007, Judge William Wehr ruled the 20% interest in the colt owned by Gallion and Cunningham Jr. would be turned over to the more than 400 persons involved in the fen-phen lawsuit.[3]

On November 6, 2007, Jackson and Bolton confirmed that they bought out the interest in Curlin controlled by their partner Sanan's Padua Stables (29%).[4]

On November 9, 2007, trainer Kenneth McPeek, who worked as a blood-stock agent and consultant for Midnight Cry Stable, filed suit in Circuit Court in Jefferson County, Kentucky alleging that the stable breached a contract calling for him to be paid a 5 percent finders fee commission on the purchase and selling price of Curlin and other racehorses, as well as other breeding rights.[5]

On December 20, 2007, Stonestreet announced the private purchase of George Bolton's 20% stake in Curlin.[6] The sale leaves Stonestreet Stables' Jess Jackson and his wife, Barbara Banke, as co-owners of 80% of Curlin and the balance held by Midnight Cry Stables, which is tied up in a legal battle involving 418 people suing the horse's original owners over a legal settlement.

On January 22, 2008, Senior Judge Roger Crittenden in a one-sentence statement overruled the foreclosure motion filed by the plaintifs against their former attorneys for alleged mishandling their settlement in the fen-phen lawsuit. The Blood Horse magazine further reported that according to attorneys representing Stonestreet Stable, they have "a first-right-of-refusal clause incorporated into the original sales agreement with Midnight Cry", should ever such a motion be ordered.[7]

Curlin was conditioned for racing by Helen Pitts. Unraced at age two, in February 2007 Curlin won a seven-furlong maiden race for three-year-olds by 12 ¾ lengths at Gulfstream Park in Florida, after which he was purchased by a racing partnership headed by majority shareholder Jess Jackson of Stonestreet Farm. The partnership also included Padua Stables, George Bolton, and Midnight Cry Stables, Curlin's original owner. The new owners turned the colt over to trainer Steve Asmussen.[8]

Curlin went on to race at Oaklawn Park in Arkansas where in March, jockey Robby Albarado rode him to victory in the Rebel Stakes, and, in mid April, in the Arkansas Derby.[9]

Curlin was established as the morning-line favorite by Churchill Downs official handicapper Mike Battaglia at 7–2 in spite of the fact that no horse had won the Derby with only three prior starts since 1915 (Regret), and no horse had won with no two-year-old preps since 1882.[10] He was the second betting choice when the race went off. Breaking from post 2 in a full field of 20, Curlin finished 3rd to Street Sense and Hard Spun.

Curlin stumbled out of the gate and raced by the stands the first time in sixth, well off a hot early pace. As the leaders began to tire, Curlin made a bold run on the far turn, but entered the stretch four wide opening the door for a fiercly rallying Street Sense who was able to sneak by to his inside. With just one furlong to go, Street Sense had opened a length and a half lead and appeared to have the race won, but Curlin was not done. In one of the sport's most thrilling finishes, Curlin made a furious charge to the wire, catching the Kentucky Derby winner in the final stride. His final time of 1:53.46 tied the track record set by Tank's Prospect in 1985, Louis Quatorze in 1996, and unofficially Secretariat in 1973.

Curlin was sent off as the favorite in the $1 million Haskell Invitational at Monmouth Park on August 5, 2007, but placed 3rd behind Any Given Saturday and Hard Spun, paying $2.10 to show on a fast track. The winning time was 1:48:35.

Ridden by Robby Albarado, on September 30, he beat Lawyer Ron by a neck in a stretch duel in the Grade I Jockey Club Gold Cup at Belmont Park in a time of 2:01:20 with a Beyer rating of 114. As the Gold Cup is a Breeders' Cup Challenge race, the win earned him an automatic berth into the Breeders Cup Classic. 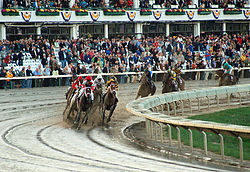 The first turn in the 2007 Breeders' Cup Classic.

On Saturday, October 27, 2007, Curlin went off as the 4th betting choice in the Breeders' Cup Classic, held at Monmouth Park Racetrack in Oceanport, New Jersey. The condition was listed as sloppy on the main track after several days of rain.

Emerging from about midpack in the field of nine, Curlin overtook the pace setter Hard Spun at the top of the stretch and drew away to win the 24th running of the Classic by 4¾ lengths over Hard Spun.

After his three year old campaign, Curlin was honored as the 2007 Horse of the Year as well as Three Year Old of the Year, defeating rivals Street Sense and Hard Spun.[12]

Curlin repeated as the Eclipse Award American Horse of the Year for 2008, becoming only the fifth horse to do so and putting him in the company of the likes of Secretariat and Forego. He also was awarded the American Champion Older Male Horse for 2008.

Curlin began his four year old campaign in Dubai at the Nad Al Sheba Racecourse, running in the Jaguar Trophy Handicap as a preparation for the Group I Dubai World Cup.[13] He defeated a field of five by 2 ¼ lengths under a hand ride in 2:00.60[14][15]

Curlin was sent out as the odds-on favorite for the Dubai World Cup. Drawing post 12, he ran three-wide outside of the leaders for the majority of the race before clearing the field when they reached the straight, winning by 7¾ lengths. He also became the only horse in Dubai World Cup history to win from the 12th post position.[16] His official winning time was initially listed by the Dubai Racing Commission as 2:00.15, which would have been the third fastest in the race's history, behind Dubai Millennium and Invasor. However, that time has since been removed after an investigation by the DRC sparked by reports by The Racing Post that their timing experts showed multiple races on the card – including Curlin in DWC – as being slower than officially reported.[17] The Racing Post claims that five of the six Thoroughbred races, the Godolphin Mile being the exception, went a full second slower than the official timings.[18]

On June 14, 2008, Curlin won his third start of the year, the Stephen Foster Handicap at Churchill Downs. He won by 4 1/4 lengths carrying 128 pounds (10 pounds more than the next highest weighted horse).

On Aug. 30, Curlin won the Woodward Stakes at Saratoga by one and a quarter lengths.[20] However, after sprinter -fractions for the first mile, the final eighth of the race was run in a slower 14.01 seconds.

On September 27, 2008, Curlin sent off as the 2–5 favorite and won his second consecutive Jockey Club Gold Cup, in a hand ride by three-quarters of a length over Wanderin Boy, earning a Beyer Speed figure of 111. The track was sealed and the final time was 2:01.93 was over a sloppy track.[21]

Curlin finished fourth in the 2008 Breeders' Cup Classic. Previously, trainer Steve Asmussen had expressed concern about running him in the Classic because of the Pro-Ride synthetic dirt at the 2008 host track, Santa Anita Park. Jockey Robby Albarado made what BreedersCup.com announcers described as an "early" move from near the back of the pack. Curlin blew by the frontrunners at the far turn but was overtaken in the stretch by eventual winner Raven's Pass, second-place finisher Henrythenavigator, and the late-charging Tiago.[22]

On November 21, Curlin's owners announced that he would begin his stud career in 2009 at Lane's End in Versailles, Kentucky, for an initial fee of $75,000. Curlin was retired and paraded at Churchill Downs on November 29, 2008.

On Jan 26, 2009, Curlin won the Eclipse Award for older male horse of the year and for the second year in a row was named Horse of the Year. Curlin joined Secretariat, Forego, Affirmed and Cigar as the only horses to win the award consecutively since the Eclipse Awards began in 1971.[23]

The first foal by Curlin, a filly out of Zophie (Hawkster), was born January 12, 2010. Sadly she was euthanized less than a month later on January 29 after a paddock accident.[24]

Curlin was bred to the 2009 American Horse of the Year, Rachel Alexandra. During the broadcast of the 2011 Kentucky Derby it was announced that Rachel is expecting a colt, due around February of 2012.