Northern Dancer (May 27, 1961 – November 16, 1990) was a Canadian-bred Thoroughbred racehorse and the most successful sire of the 20th Century. The National Thoroughbred Racing Association calls him "one of the most influential sires in Thoroughbred history".[citation needed]

A bay colt, Northern Dancer was by Nearctic and his dam Natalma, was by the great Native Dancer.[1] In 1952, Edward P. Taylor, Canadian business magnate and owner of Windfields Farm, had attended the December sale at Newmarket, England where he purchased Lady Angela, a mare in foal to leading English-based sire Nearco. The following spring, Taylor sent Lady Angela to be bred to Nearco once again, then shipped her to his farm in Canada later in 1953, and in 1954, Lady Angela foaled a colt in Canada named Nearctic who was voted the 1958 Sovereign Award for Horse of the Year.

At the yearling sales at Windfields in Toronto, Ontario, the diminutive Northern Dancer didn't find a buyer at the $25,000 reserve price, so he eventually joined the Windfields Farm racing stable.

Northern Dancer was ridden by Ron Turcotte in his first victory as a two-year-old at Fort Erie Race Track. He won the Summer Stakes and the Coronation Futurity in Canada and the Remsen Stakes in New York. His record of seven victories in nine starts earned him the Canadian Juvenile Championship.

At three, Northern Dancer won the Grade I Flamingo Stakes and the Grade I Florida Derby with jockey Bill Shoemaker aboard. Before the running of the Blue Grass Stakes at Keeneland Race Course in Lexington, Kentucky, trainer Horatio Luro asked Shoemaker to make a commitment to ride Northern Dancer in the Kentucky Derby. But Shoemaker chose a colt he had never ridden named Hill Rise as his Derby mount. The unbeaten Hill Rise had an impressive campaign in California, winning the San Felipe Stakes and the Grade I Santa Anita Derby. Shoemaker campaigned hard to get Hill Rise as his mount, believing the colt represented his best chance for a Derby win. As a result of Shoemaker's decision, Bill Hartack became Northern Dancer's permanent jockey and guided him to victories in the Blue Grass and the Kentucky Derby, winning the Derby over a fast finishing Hill Rise in a record time that stood until it was broken by Secretariat in 1973. (Secretariat's record still stands). Hartack and Northern Dancer won the Preakness Stakes, and finished third in the Belmont Stakes to Quadrangle and Roman Brother. After the Belmont, Northern Dancer won Canada's Queen's Plate by seven and a half lengths before tenderness in his left front tendon ended his racing career. He was named North America's champion three-year-old colt of 1964, and Canadian Horse of the Year.

In his two years of racing, Northern Dancer won 14 of his 18 races and never finished worse than third. In The Blood-Horse ranking of the top 100 U.S. thoroughbred champions of the 20th Century, Northern Dancer was ranked #43.

Northern Dancer stood at stud at Taylor's Windfields Farm in Oshawa, Ontario until 1969, when he was moved to Windfields' Maryland farm, where he remained until his death. Northern Dancer was the most successful 20th century Thoroughbred sire. His offspring have earned more money and won more major stakes races than those of any other sire up until the 1990s era of shuttle stallions, including North American, Japanese, Australian, and European champions. He sired 147 stakes winners including the great Nijinsky II, winner of England's Triple Crown, as well as The Minstrel, Shareef Dancer, Secreto, Northernette, El Gran Senor, Lomond, and Fanfreluche, among others.[2]

He has been named the 20th century's best sire of sires, producing multiple champions in both the United States and the United Kingdom. According to Thoroughbred Times, Northern Dancer had at least eleven sons who became truly outstanding sires: Be My Guest, Danzig, El Gran Senor, Fairy King, Lyphard, Nijinsky, Northern Taste, Nureyev, Sadler's Wells, Storm Bird, and Vice Regent.[3] Northern Dancer's influence extended to Japan where Northern Taste stood at stud at the Yoshida family's Shadai Stallion Station and was the leading sire in Japan for ten years. By early 1980, Northern Dancer and his son Nijinsky II had combined to sire the winners of almost US$20 million in stakes.[1] He also became the grandsire of 1991 Canadian Triple Crown winner Dance Smartly, who became the richest filly at that time with twelve wins from seventeen career starts including the 1991 Breeders Cup Distaff and over $2 million. She also proved to be a success as a broodmare.

Between 1974 and 1988, twelve times Northern Dancer yearlings led the Keeneland July Selected Yearling Sale by average price. In the 1983 Keeneland Sales horse auction, one of Windfields' colts, that would eventually be named Snaafi Dancer, became the first $10 million yearling. In 1984 his twelve yearlings sold for an unrivalled sale-record average of price of US$3,446.666.[4]

In the 1980s, Northern Dancer's stud fee reached US$1 million, an amount four to five times his rivals and a record amount that as of 2009 has not been equalled.[5]

Although he has been dead for almost twenty years, there are more Northern Dancer-line Breeder's Cup winners than any other horse. According to France Galop, since 1994 the male bloodline of every Prix de l'Arc de Triomphe winner goes back to Nearco, his son Nasrullah, and his grandson Northern Dancer.

Northern Dancer is also the paternal grandsire of several prominent stallions, including Storm Cat, Deputy Minister, El Prado, and Danehill. He is the great-grandsire (on both the sire and dam side) of Big Brown, the winner of the 2008 Kentucky Derby and Preakness Stakes. Northern Dancer is the great-grandsire of Australia's superstar mare, Makybe Diva. He is an ancestor of the winners of all three U.S. Triple Crown races in 2009—Mine That Bird in the Kentucky Derby, Rachel Alexandra in the Preakness, and Summer Bird in the Belmont. He is on both sides of the pedigrees of Mine That Bird and Rachel Alexandra. He is the great-great-grandsire of Sea the Stars, who many considered the world's greatest turf horse in 2009. 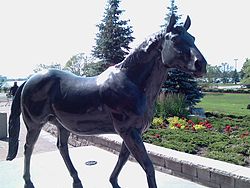 Northern Dancer won the American Eclipse Award as Three-Year Old Male Champion of 1964 and the Sovereign Award for Horse of the Year. In 1965, he became the first horse to ever be voted into Canada's Sports Hall of Fame, an honour he held for thirty-one years and now shares with Canadian Equestrian Champion Big Ben (inducted 1996). On its formation, he was part of the first group of inductees into the Canadian Horse Racing Hall of Fame and was inducted into the National Museum of Racing and Hall of Fame in 1976. In 1977, Northern Dancer won three world sires' premiership titles being for the number of international stakes winners, international stakes wins and progeny stake earnings.[1]

He was retired from stud (breeding) on 15 April 1987 at the age of 26. He died in 1990 and is memorialized at Windfields Farm in Oshawa, Ontario, Canada. Northern Dancer's remains were brought back to Canada for burial. In 1999, Canada Post honoured the horse with his image placed on a postage stamp. A residential street was named after Northern Dancer on the former site of the Greenwood Race Track in east-end Toronto. There is also a life size bronze statue of the horse outside Woodbine Race Track in northwest Toronto.

During the past forty years, a number of books have been written about Northern Dancer, with the latest two editions coming out in 2006. One, by respected pedigree authority Avalyn Hunter, author of American Classic Pedigrees (1914–2002), recounts how Northern Dancer and his sons have established a royal dynasty that has profoundly dominated the international bloodstock market.