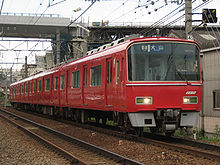 The line is the main line of the operator. The line has rivaled Tōkaidō Main Line in the Chūkyō Metropolitan Area (Greater Nagoya). Local traffic on the Nagoya Line used to be much heavier than on the Tōkaidō Main Line, but since the privatization of the Japanese National Railways (JNR), transforming into the Central Japan Railway Company (JR Central) in this area, competition has become much stronger in the Chūkyō area into the competition became much more fierce.

Due to historical reasons, the line shares its track between Hirai Signal Box and Toyohashi Station with the JR Iida Line. The agreement between two companies prohibits Meitetsu to have more than 6 trains in one direction per hour on the 3.8 km of shared tracks. Consequently, local trains are unable to reach Toyohashi, instead, terminate at Ina Station.

Many branch lines of Meitetsu have through services to/from the Nagoya Line. Toyokawa, Nishio, Tokoname (which has its through services with Airport, Kōwa, Chita), and Inuyama lines all have through services bound for Meitetsu Nagoya, making the segment around the station extremely busy. Between Biwajima Junction and Kanayama, 26 trains go through per hour, even during less busy daytime services.

Abbreviations are tentative for this article.

For abbreviations of rapid trains, refer to the above section. For distances and connections, see the route diagram.

Some trains stop at stations signed with lower cases. At Sukaguchi, Limited Expresses only from Tsushima Line stop, shown as LE*.

For distances and transfers, see the route diagram.