Meitetsu Gifu Station (名鉄岐阜駅, Meitetsu Gifu-eki?) is the main terminal of Nagoya Railroad in the city of Gifu, Gifu Prefecture, Japan. It is one of the two major train stations of the city along with JR Gifu Station.

The station was renamed from Shin-Gifu Station (新岐阜駅, Shin-Gifu-eki?) on January 29, 2005 when the new Rapid Limited Express service to Chūbu Centrair International Airport was introduced.

The rail line originally opened on February 11, 1911, as the Nagazumi-cho Station; at the time, it was operated by the Mino Electric Railroad, Co. On December 26, 1914, Shin-Gifu Station (the present-day station) on the Mino Electric Railroad's Kasamatsu Line (present day Nagoya Line) began operations. Service was again expanded on December 28, 1928 when the Kakamigahara Railroad (present day Kakamigahara Line) began operating from the Nagazumi-cho Station. 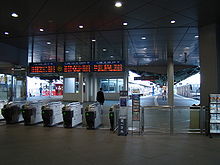 Entrance to the platforms