The Democrats (Portuguese: Democratas - DEM) is a centre-right political party in Brazil, considered the main in the right-wing spectrum. Despite its former name (Liberal Front Party), the party affiliates itself to the Centrist Democrat International, and the International Democrat Union. The name comes from its support to free market policies.[1] It was founded on March 28, 2007, in order to replace the Liberal Front Party (PFL), which was a dissidence of the defunct Social Democratic Party (PDS), successor to the National Renewal Alliance (Arena), official party during the military dictatorship of 1964-1985. DEM's identification number is 25 and its colors are green, blue and white.

The current Democrats have their origins on the National Democratic Union (União Democrática Nacional - UDN), a party founded on April 7, 1945, at the end of Getúlio Vargas' Estado Novo regime, in order to oppose the nationalist policies of the late President.[2] UDN ran presidential candidates in the elections of 1945, 1950 and 1955, casting Brigadier Eduardo Gomes as candidate in the first two and General Juarez Távora in the latter, losing in all three occasions.[2] On 1960, UDN was able to obtain a historical victory by supporting the conservative candidate Jânio Quadros, which was not a member of UDN himself.[2] After his resignation on August 25, 1961, in a clumsy political maneuver, Vice-President João Goulart, from a different electoral coalition (at that time, Brazilians would vote for President and Vice President separately), took office. A member of Vargas' Brazilian Labour Party (Partido Trabalhista Brasileiro - PTB), and a political protégé of the late President, his Basic Reforms were labelled as a Soviet influence on Brazilian politics.[3] He was depposed by the Army in a US-backed coup d'état in 1964, which was supported by most UDN members.[2]

In 1965, the multi-party system established on 1945 was abolished.[4] The military rule established two parties: the National Renewal Alliance Party (Aliança Renovadora Nacional - ARENA), the official party of the regime, and the Brazilian Democratic Movement (Movimento Democrático Brasileiro - MDB), the moderate opposition.[4] Most UDN members, as well as most members of the Social Democratic Party (Partido Social Democrático - PSD) and minor conservative parties, joined UDN.[4] Although there were no direct elections for President during the military dictatorship, the regime kept the elections for the National Congress, with some restrictions. Arena had an overwhelming voting in the parliamentary elections of 1966 and 1970 as a result of MDB's weak organization and of the regime's self-called "economic miracle". However, MDB's advance in 1974 and 1978 made the regime change the election rules in the country in order to gain more seats than the opposition. With the end of bipartisanship, Arena was officially dissolved on November 29, 1979, just a week after the electoral reform. The former Arena then became the Democratic Social Party (Partido Democrático Social - PDS), supporting the administration of General João Figueiredo, who would become the last military President of Brazil.

Still under the effect of opposition growth, the government maneuvered to assure a majority for PDS in the following elections. Its first step was to postpone the local elections from 1980 to 1982, when state Governos would be elected by direct vote for the first time since 1960, as well as the members of the National Congress that would elect the new president in 1985. Its next step was to pass an electoral law in the National Congress on January 11, 1982 that prohibited the formation of electoral coalitions and established the obligation for voters to cast their votes for one party for all offices. Due to this, PDS was able to elect more Governors, Senators, Federal Deputies, State Deputies, Mayors and Councilors than the opposition parties. Nevertheless, it lost control of major states such as São Paulo, Minas Gerais, Rio de Janeiro, Espírito Santo, Paraná, Pará, and Goiás.

On January 24, 1985, DEM's direct heir, the Liberal Front Party (Partido da Frente Liberal - PFL) was founded as as a dissence of PDS. At the time, Brazil was under the effervescence that put an end to the military regime that began in 1964. In the previous year, a series of rallies known as Diretas Já gathered thousands of peoples in the streets of major cities to demand the direct election of the next President, as envisaged in the Dante de Oliveira amendment, which was pending approval in the Congress. On January 10, 1984, PDS rejected the support to this proposition, but a pro-Diretas Já group emerged within the party a few days later. On April 25, 1984, the Congress, besieged by Army officials, voted the amendment. It did not reach the required quorum for approval, due to the absence of 112 deputies from PDS.

After the attempts to promote a direct election failed, discussions about the presidential succession turned to the National Congress, which would elect the President indirectly in the following year. The pro-Diretas Já group of PDS formed the Liberal Front, and decided to support PMDB's candidate Tancredo Neves against PDS's Paulo Maluf, the official candidate of the military regime. With the support of Aureliano Chaves, Marco Maciel, Antônio Carlos Magalhães, and Jorge Bornhausen, among other major dissidents from PDS, the Liberal Front named José Sarney as Neves' running mate for the 1985 presidential election. On January 15, 1985, the Neves/Sarney presidential ticket got 480 of the 686 votes available in the Congress (70% of the total). Nine days later, on January 24, 1985, the Liberal Front officially disbanded from PDS and formed the Liberal Front Party (PFL). With the death of Tancredo Neves on April 21, 1985, Sarney took office as President. Due to the same electoral law that forbade coalitions, Sarney was forced to join PMDB, from which he is a member up until today. PFL, however, was a major allied of his government. His daughter, Roseana, had been a member of PFL until 2006, when she was expelled from the party for supporting Luiz Inácio Lula da Silva.

On 1989, Aureliano Chaves was chosen as PFL's presidential candidate, but the weakness of his campaign made most leaders of the party to declare their support for PRN's candidate, Fernando Collor, himself a former member of Arena, PDS, and PMDB. PFL's Senators, however, had masterminded the candidacy of businessman and television presenter Silvio Santos, a maneuver which had been hampered by the Supreme Electoral Court. An ally of Collor in the runoff election against Luiz Inácio Lula da Silva, PFL participated in his government, and even after his impeachment it participated in the coalition that supported Itamar Franco's government. From 1994 to 1998, PFL supported Fernando Henrique Cardoso and thus secured the post of vice-president with Marco Maciel. Next to the 2002 election, an operation led by the Federal Police in Maranhão undermined the presidential candidacy of Roseana Sarney, leading to a rupture with the government. 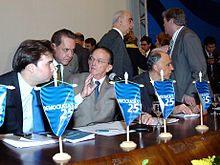 Leaders at the March 27, 2007 convention in which PFL was refounded as DEM.

At the legislative elections, on October 6, 2002, the party won 84 out of 513 seats in the Chamber of Deputies and 14 out of 54 seats in the Senate. After this election, which saw the rise of Luiz Inácio Lula da Silva as President, PFL became an opposition party for the first time ever since the 1964 coup. The party reorganized its alliance with Cardoso's PSDB in order to form the official opposition in the National Congress.

At the following general elections, held on October 1, 2006, the party won 65 seats in the Chamber of Deputies and 6 out of the 27 seats on dispute in the Senate. It became the second largest party in the Senate. The party does not usually run presidential candidates, but does run gubernatorial candidates in several states. At the 2006 elections, the party lost several state governorships, but won the governorship of the Federal District, which was later lost due to a corruption scandal in which Governor José Roberto Arruda was caught on tape receiving bribery from private companies. In 2007, the party was refounded and adopted its current name.

At the 2010 elections, the party continued to suffer great losses in the Parliament, having lost 22 seats in the Chamber of Deputies and 7 seats in the Senate. DEM was able to elect only two Senators (Demóstentes Torres from Goiás, and José Agripino Maia from Rio Grande do Norte), which will join the four others whose seats were not up for election. Its longest-serving member, former Vice President Marco Maciel, which had been first elected to the National Congress in 1966, was not re-elected and will no longer serve in the Senate.[5] On the other hand, DEM won the governorships of the states of Rio Grande do Norte and Santa Catarina, expanding its presence in state administrations.

As a result of the decline in DEM's popularity, the party studies to merge itself with another major party, such as the Brazilian Democratic Movement Party (PMDB) and the Brazilian Social Democratic Party (PSDB). The merge with PMDB, however, has been rejected by most of DEM's leaders due to the fact that it is a member of the Lulista alliance in the National Congress and in most local level administrations.

The party is usually considered to be right-wing.[7] In 2006, the party's former president Jorge Bornhausen stated in an interview to Brazil's largest newsmagazine Veja, that the party should be considered centrist and adept of social liberalism.[8] However, other party leaders have classified it as "internationally, closest to Christian democracy".

According to political scientist Jairo Nicolau, the name change was intended to crown a process of modernization inside the party.[9] "DEM was launched to be a modern right-wing party, with a new program, and aimed at the urban middle classes; a kind of Conservative Party in the UK", he says.[9] This, according to him, explains the departure of founding members and the rise of younger leaders.[9] For instance, Jorge Bornhausen, which had been a member of UDN, retired from the presidency of the party to give place to federal deputy Rodrigo Maia, son of César Maia.[6] The Santa Catarina section of the party was taken over by Bornhausen's own son, deputy Paulo Bornhausen.[6] In Bahia, ACM Neto took over the legacy of his grandfather, Antônio Carlos Magalhães.[6]

This article incorporates information from the equivalent article on the Portuguese Wikipedia.