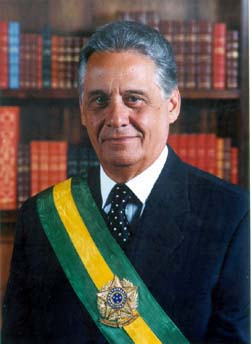 Fernando Henrique Cardoso, PC (born , ) - also known by his initials FHC - was the President of the Federative Republic of for two terms from , to , . He is also an accomplished sociologist. [ [http://www.msnbc.msn.com/id/11675827/site/newsweek/ MSNBC News-Newsweek International: 'Che Guevara In Tweed'] ] He was awarded in 2000 the prestigious for International Cooperation [http://www.fundacionprincipedeasturias.org/ing/04/premiados/trayectorias/trayectoria656.html Fernando Henrique Cardoso]

Born in Rio de Janeiro, he has lived in São Paulo most of his life. Cardoso is a widower (he was married to until her death in June 24, 2008) and has three children.Educated as a sociologist, he was a Professor of and at the . [ [http://research.brown.edu/pdf/1143752776.pdf Biography at Brown University] ] He was President of the (ISA), from 1982 to 1986. He is a member of the (Princeton), [ [http://attend.clintonglobalinitiative.org/home.nsf/ext_2006_attend?Open&att=speak_cardoso Biography at the Clinton Global Initiative] ] an honorary foreign member of the and has penned several books.He was also Associate Director of Studies in the in and then visiting professor at the and later at the .

After his presidency, he was appointed to a five-year term as professor-at-large at 's , beginning in 2003.Cardoso is a founding member of the University of Southern California Center on Public Diplomacy's Advisory Board.Fact|date=April 2007 In February 2005, he gave the fourth annual on Foreign Policy and International Relations at the Library of Congress, Washington DC on "Dependency and Development in Latin America". [ [http://www.loc.gov/today/pr/2005/05-001.html News from the Library of Congress] ] In 2005, Cardoso was selected by the British magazine "Prospect" as being one of the world's top one hundred living intellectuals. [ [http://www.youtube.com/watch?v=fF2Dj6dZ3Yw Interview with Al Jazeera English's Riz Khan] ] [ [http://www.ifhc.org.br/Pagina.aspx?id=6001&mn2=0 Fernando Henrique Biography] (Portuguese)] [ [http://www.ifhc.org.br/Home.aspx Instituto Fenrnando Henrique Cardoso] ] [ [http://podcasts.clintonresearch.com/2007/03/27/president-fernando-cardoso.aspx President Cardoso's lecture at the Clinton School of Public Service: "Democracy Today: The Experience of Latin America"] (Podcast)]

In the beginning of his political life, Fernando Henrique was elected Senator of the state of São Paulo for the former MDB, in 1982. In 1985, he ran for Mayor of São Paulo even though he was in front according to the polls, he lost to former President in an episode which, believing he was going to win the election, he let himself be photographed in the mayor's chair before the elections. Some attribute his loss in the election to this episode.

Re-elected for the Senate in 1986 for the PMDB, which substituted MDB after Brazilian re-democratization, he helped a group of parliamentarians of PMDB to abandon the party in order to create the Brazilian Social Democracy Party (). Until 1992, Cardoso served as Leader of the PSDB in the Senate. From October 1992 to May 1993, he served as Minister of Foreign Affairs under President (PMDB).

From May 1993 until April 1994, he was Minister of Finance and introduced the (Real Plan) to end hyperinflation. Buoyed by the success of the Plano Real, Cardoso decided to run for the Presidency and, backed by President Franco, won in the first round of elections, on , . Four years later, in , , after a Constitutional Amendment that allowed reelection, Cardoso won the Presidency again, with approximately 53% of the vote, while his closest challenger, (PT), had about 32%.

Cardoso was succeeded in 2003 by Lula da Silva, who was running for President for the fourth time. Lula won in the runoff against the Cardoso-supported candidate . Lula's election has since been interpreted as a result of Cardoso's growing unpopularity in his second term.

Cardoso, often nicknamed "FHC", was elected with the support of a heterodox alliance of his own Social Democratic Party, the PSDB, and two right-wing parties, the Liberal Front Party (PFL) and the (PTB). Brazil's largest party, the centrist Party of the Brazilian Democratic Movement (PMDB), joined Cardoso's governing coalition after the election, as did the right-wing PPB, the Brazilian Progressive Party, in 1996.

Party loyalty was weak, and deputies and senators belonging to the parties in the coalition did not always vote with the government. President Cardoso had difficulty, at times, gaining sufficient support for some of his legislative priorities, despite the fact that his coalition parties held an overwhelming majority of congressional seats.

In 2000, Cardoso demanded the disclosure of some classified military files concerning , a network of South American military dictatorships that kidnapped and assassinated political opponents.

As a result, major reforms planned by the , such as changes in the tax system and in , were only partially approved after really long and tiring discussions. On , , he issued the controversial , which created a framework for the clear demarcation of indigenous reservations, which as part of the process opened indigenous territories to counter-claims by adjacent landowners.

Using his previous experience as Minister of Foreign Affairs and his prestige as an internationally famous sociologist, FHC was greatly respected in the world scenario, building friendships with such leaders as and . Although he was respected abroad, in Brazil FHC had problems explaining his government priorities to Congress and people in general. Although claiming to be a leftist and supporter of , FHC took some decisions in economy that led people to believe he became a neoliberal.

He also experienced personal problems with former ally , his predecessor that later became Governor of . FHC was also criticized for transforming the Constitution to his own benefit - creating reelection and allowing him to stay eight years in office. Most people think that his popularity in his first four years was gained with the continuation of Plano Real, but decreased in his last four years after different crisis in politics and in the energy department. He also publicly admitted that he could have done more for and for the creation of new jobs.

After he stepped down from office, FHC has been giving lectures at , about Brazilian economic policy, urban development, and deforestation [http://www.watsoninstitute.org/pubs_news/cardoso_lecture.pdf] . Also, he dedicates his time to a personal institute created by him in , based on the model of bodies created by former Presidents of the United States. He has written two books about his experience as President of Brazil, and has given many interviews, where he criticizes the government of . In 2006, he helped the campaign of the PSDB candidate for the Presidency, , and has said many times that he does not wish to run for office again.

After leaving the Brazilian presidency, Cardoso also joined the . [en [http://www.clubmadrid.org The Club of Madrid is an independent organization dedicated to strengthening democracy around the world by drawing on the unique experience and resources of its Members – 66 democratic former heads of state and government.]