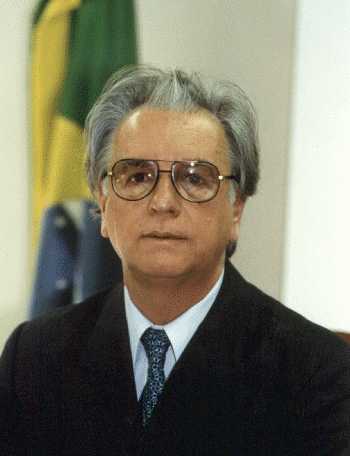 Itamar Augusto Cautiero Franco, usually known as Itamar Franco (pron. IPA2|i.tɐ.'maʁ 'fɾɐ̃.kʊ), (born , ) is a ian politician who was President of Brazil from , to , .

Itamar Franco was born at sea, aboard a ship traveling between Salvador and . He was named Itamar because he was born on board of ship "Ita", at sea (in Portuguese "Mar"). His family was from , , where he grew up and became a civil engineer in 1955, graduating from the . Franco was mayor of Juiz de Fora from 1967 to 1971 and again from 1973 to 1974. He resigned as mayor in 1974 and ran successfully for the Federal Senate as a representative of Minas Gerais. He soon became a senior figure in the MDB (Movimento Democrático Brasileiro - Brazilian Democratic Movement), the official opposition to the military regime that ruled Brazil from 1964 to 1985. Re-elected as a senator in 1982, he was defeated in an attempt to be elected governor of Minas Gerais in 1986 as a candidate of the Liberal Party (PL).

In 1989, Franco left PL and joined the small PRN (National Reconstruction Party) to be selected the running-mate of the presidential candidate . Collor won and Franco became vice-president. In 1992, Collor was charged with corruption and was impeached by the Congress. Franco was acting president from October 1992 until Collor's impeachment in December of that year, at which point he formally took office as president.

Franco took power as Brazil was in the midst of a severe economic crisis, with reaching 1,100% in 1992 and rocketing to almost 6,000% in 1993. Franco developed a reputation as a mercurial leader, but he selected as his Finance Minister , who launched the "" that stabilized the economy and ended inflation. Cardoso became the official candidate to succeed Franco and was elected President in late 1994. Franco, however, soon became a severe critic of Cardoso's government and disagreed with the privatization program. Thereafter, he served as the Brazilian Ambassador to Portugal in Lisbon and then as Brazilian Ambassador to the Organization of American States in Washington, DC until 1998. He was elected governor of Minas Gerais in 1998 and as soon as he took office, he enacted a moratorium on state debt payments, worsening the national economic crisis. Itamar Franco served until 2003 and since then has been the ambassador of Brazil in , until leaving the position in 2005.