Challney is a district in Luton off the main arterial road leading from Luton to the town of Dunstable. Challney was originally just another name for Chaul End up on the hill to the south of the district.[2]

Challney was a sleepy residential area until the extension of the nearby M1 motorway on the west side which was built in the early 1960s. The Luton and Dunstable Hospital is also situated nearby and with the increase in traffic (and accidents) has a good reputation for the treatments of car crash victims. Electrolux was for many years the main employer of the area but closed its manufacturing operations in the 1970s. However, Electrolux has moved its UK headquarters back to the area.

Challney is still a relatively residential area with good schooling and local amenities. One of Luton's large Retail Parks for DIY and Electronic goods is located in the area and attracts visitors from all over the county. Leagrave railway station is close by for residents wishing to commute to Bedford or London. 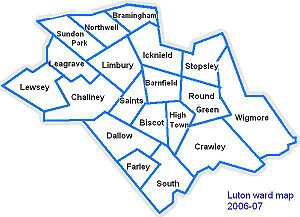 The ward forms part of the parliamentary constituency of Luton North, whose MP is Kelvin Hopkins (Labour). Barnfield is within the East of England (European Parliament constituency).

Two weekly newspapers are delivered free to all the houses in Challney. However they are not specific to Challney. They are: