The Short Mayo Composite was a piggy-back long-range seaplane/flying boat combination produced by Short Brothers to provide a reliable long-range air transport service to the United States and the far reaches of the British Empire and the Commonwealth.

Short Brothers had built the Empire flying boats which were capable of operating long range routes across the British Empire but could only attempt the trans-Atlantic route by replacing passenger and mail-carrying space with extra fuel.

It was known that aircraft could maintain flight with a greater load than is possible to take off with; Major Robert H. Mayo, Technical General Manager at Imperial Airways (and later a designer at Shorts) proposed mounting a small, long-range seaplane on top of a larger carrier aircraft, using the combined power of both to bring the smaller aircraft to operational height, at which time the two aircraft would separate, the carrier aircraft returning to base while the other flew on to its destination. The British Air Ministry issued Specification "13/33" to cover this project.

The Short-Mayo composite project comprised the Short S.21 Maia,[1] (G-ADHK) a design similar to the S.23 C class flying-boat,[2] and the Short S.20 Mercury[1] seaplane, the latter attached to a trestle-like pylon mounted on top of the fuselage of the former.

Although similar to the "C-Class" Empire boat, Maia differed in some considerable areas from that design: the sides were "tumblehome" rather than straight up to give a greater beam for better stability on the water; larger control surfaces; an increase in total wing area from 1,500 sq ft (140 m2) to 1,750 sq ft (163 m2) ; the engines were mounted further from the wing root to provide clearance for Mercury's floats and the fuselage was swept up towards the tail to raise the tailplane relative to the wing. Like the Empire boats, Maia could be furnished to carry 18 passengers.[3] Maia first flew (without Mercury) on 27 July 1937, piloted by Shorts' Chief Test Pilot, John Lankester Parker.[4]

The upper component, Mercury, was a twin-float, four-engine seaplane crewed by a single pilot and a navigator, who sat in tandem in a fully enclosed cockpit. There was capacity for 1,000 lb (456 kg) of mail. Mercury's flight controls, except for elevator and rudder trim tabs, were locked in neutral until separation. Mercury's first flight, also piloted by Parker, was on 5 September 1937.[5]

"All eight engines were used during combined flight but the controls of Mercury were locked. The airfoil designs of the two aircraft were such that Mercury's wings were carrying the major part of the air load at the speed and height chosen for separation. Safety locks prevented separation until this speed and height were reached and both pilots had an unlocking handle, both of which had to be pulled to cause release."[6]

The mechanism that held the two aircraft together allowed for a small degree of movement. Lights indicated when the upper component was in fore-aft balance so trim could be adjusted prior to release. The pilots could then release their respective locks. At this point the two aircraft remained held together by a third lock which released automatically at 3,000 lb. The design was such that at separation Maia would tend to drop while Mercury would climb.[7]

The first successful in-flight separation was carried out from the Shorts works at Borstal, near Rochester, Medway, on 6 February 1938, Maia piloted by Parker and Mercury by Harold Piper. Following further successful tests, the first transatlantic flight was made on 21 July 1938 from Foynes, on the west coast of Ireland, to Boucherville,[8] Montreal, Canada, a flight of 2,930 miles (4,714.4 km). Maia, flown by Captain A.S. Wilcockson, took off from Southampton carrying Mercury piloted by Captain Don Bennett.[9] As well as Mercury, the launch aircraft Maia was also carrying 10 passengers and luggage.[10] Mercury separated from her carrier at 8 pm to continue what was to become the first commercial[note 1] non-stop East-to-West transatlantic flight by a heavier-than-air machine. This initial journey took 20 hrs 21 min at an average ground speed of 144 mph (232 km/h).[11] 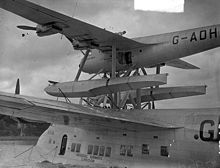 The pair in Ireland.

The Maia-Mercury composite continued in use with Imperial Airways, including Mercury flying to Alexandria, Egypt, in December 1938. After modifications to extend Mercury's range, it subsequently established a record flight for a seaplane of 6,045 miles (9,726.4 km) from Dundee in Scotland to Alexander Bay (in South Africa) between 6 and 8 October 1938.

Only one example of the Short-Mayo composite was built, the S.21 Maia with the registration G-ADHK and the S.20 Mercury (G-ADHJ). The development of a more powerful and longer-range Empire boat (the Short S.26), the further development of in-flight refuelling and the outbreak of the Second World War combined to render the approach obsolete. Maia was destroyed in Poole Harbour by German bombing on 11 May 1941.[12] Mercury was flown to Felixstowe for use by 320 (Netherlands) Squadron RAF a Dutch seaplane reconnaissance unit serving with the Royal Air Force at RAF Pembroke Dock[clarification needed]. When this squadron was re-equipped with Lockheed Hudsons, Mercury was returned to Shorts at Rochester on 9 August 1941 and broken up so that its aluminium content could be recycled for use in the war effort.[13]