Vnukovo Airport was opened and used for military operations during the Second World War, but became a civilian facility after the war.

President Reagan at Vnukovo in 1988

Vnukovo is the oldest of Moscow's operating airports. Its construction was approved by the Soviet government in 1937, since the older Khodynka Aerodrome (located much closer to the city centre, but closed by the 1980s) was becoming overloaded. Vnukovo was opened on 1 July 1941. During the Great Patriotic War it served as a military airbase; passenger services started after the war.

On 15 September 1956 the Tupolev Tu-104 jetliner made its first passenger flight from Moscow Vnukovo to Irkutsk via Omsk.

On 4 November 1957 the Romanian Workers' Party, comprising the most prominent politicians of Communist Romania (Gheorghe Gheorghiu-Dej, Chivu Stoica, Alexandru Moghioroş, Ştefan Voitec, Nicolae Ceauşescu, Leonte Răutu and Grigore Preoteasa), was involved in an accident at Vnukovo Airport; Preoteasa (who was Minister of Foreign Affairs at the time) was killed, as was the aircraft's crew. Several others were seriously injured.

The first passenger flights of Ilyushin IL-18 (Moscow to Alma-Ata, on 20 April 1956) and Tupolev Tu-114 (Moscow to Khabarovsk on 24 April 1961) were also made from Vnukovo Airport. In 1980 Vnukovo was expanded because of the 22nd Summer Olympic Games. In 1993 Vnukovo Airport became a joint-stock company. 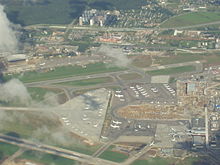 A massive reconstruction and strategic development programme commenced at Vnukovo International in late 2003, following the transfer by the Federal Government of the controlling stake in the airport to the Government of Moscow.

As part of the Airport Strategic Development Plan the following projects were completed between 2003 and 2005. 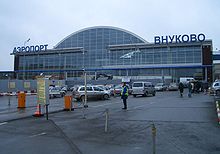 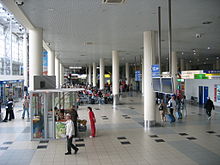 Interior of Terminal B at Vnukovo

Operators like to stress the fact that, due to its location 28 kilometres (17 mi) southwest from the centre of Moscow, the flying time for Western airlines is 10 to 20 minutes shorter than to the other Moscow airports, Sheremetyevo and Domodedovo. Thus each aircraft flying from Vnukovo will burn less fuel.

Of the three Moscow airports, Vnukovo is the highest (204m above sea level) and hence in case of fog it has frequently served as an alternative airport.[4]

The airfield has two intersecting runways of 3,000 metres (9,800 ft) and 3,060 metres (10,040 ft) in length. Each runway is 60 metres (200 ft) wide, with 10m wide safety shoulders on each side. The runways' joint capacity is 60 aircraft movements per hour. The airport has two passenger terminals (International Terminal B and Domestic Terminal 2), one general aviation terminal (for charter business flights), one cargo terminal and 60 aircraft stands. The airport can handle a maximum number of 3,000 passengers per hour, and 4,000 people are employed there. The Tupolev rework facility is also located at Vnukovo. In 2008 the airport handled almost 8 million passengers, representing a 16.7% increase over 2007.[3]

Vnukovo Airport is equipped with a VIP hall, which is used by many political leaders and important people visiting Russia. The Russian President also uses Vnukovo's VIP facility. 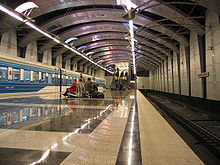 The prospective development programme is intended to last until the year 2015 and is aimed at transforming Vnukovo International into a highly competitive air transportation hub of international significance – one that would offer a comprehensive range of quality services to both its passengers and its tenant carriers.

A new international passenger Terminal A will have a total floor space of 250,000 sq m and passenger throughput capacity of 7,800 passengers per hour, making a total capacity of 18–20 million passengers annually.[5] This will open up a plethora of opportunities for the tenant airlines to expand and radically improve the quality of their customer service at the airport, and ensure the introduction of international-quality service and comfort overall. The sprawling terminal building will be located on the site of the existing domestic passenger terminal and will also serve as a springboard for the subsequent development of the entire adjacent landside area both next to the terminal and further out towards Vnukovo Settlement. The oldest of the Vnukovo passenger terminals, dating back to 1941, will be demolished by the time construction of the new one goes ahead (it started to be dismantled in November 2005). The existing Domestic Terminal 2 built in the late 1970s will continue in operation until its eventual demolition during the final phase of construction and replacement with the new terminal.

The expansion plans include lengthening one of the two V-configured runways (3,000m and 3,060m long) to 3,800m and upgrading the instrument landing system from the present CAT II to CAT III. The existing taxiways are to be extended as part of the expansion and new ones will also be built, along with a brand new control tower, an extension to the cargo terminal and a multi-storey car park.