The bombing killed at least 37 people[2] and injured some 173, including 115 who had to be hospitalised.[4] Of the casualties, 31 died at the scene, one on the route to hospital[5], three later in hospital on the same day, one died on February 2, 2011 after having been in a coma and another died on February 24, 2011.[2] Russia's Investigative Committee later identified the suicide bomber as a 20-year-old male, native of Ingushetia, trained by the Islamist militants from the North Caucasus region.[6]

In 2010, Domodedovo Airport located 42 kilometres (26 mi) southeast of central Moscow was ranked Russia's busiest airport serving over 22 million domestic and international passengers. Prior to the 2011 attack, an earlier terrorist incident had drawn concerns related to the security of the Domodedovo airport. In 2004, suicide bombers were able to get aboard of two passenger planes in Domodedovo and then carry out the explosions while in air. The incident resulted in an expensive step-up of security measures at the airport, including the installation of full body scanners.

Suicide bombing was carried out by 20-year-old Magomed Evloev, a native of Ingushetia. Evloev had arrived to Moscow from Nazran on a bus few days earlier. While in Moscow, he was assisted by Islam Yandiev and Ilez Yandiev, who drove Evloev to the airport and watched him carry out the bombing in the terminal. Evloev managed to carry an explosive device under his coat unnoticed while passing a security checkpoint at the terminal entrance. He proceeded through the international arrival hall to the luggage claim area where the explosive device mounted on Evloev was detonated. Investigation indicated that the explosive device was packed with shrapnel, pieces of chopped wire and had 2 to 5 kg of TNT equivalent[7][8] 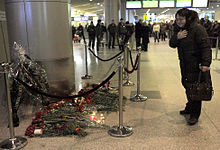 Flowers placed at a makeshift memorial in the Domodedovo terminal for the victims of the attack.

Most victims were the passengers who arrived to Domodedovo shortly before the attack and were present in the baggage claim hall where the explosion took place. On January 26, the Ministry of Emergency Situations reported the names of 35 casualties of the terrorist attack.[9] Few days later, two more victims died from the sustained injuries in a hospital.

One of the casualties was 29-year-old Ukrainian playwright Anna Yablonskaya, an author of over a dozen playscripts. She arrived to Domodedovo from her native city of Odessa to attend an award ceremony in Moscow for young playwrights hosted by the Cinema Art magazine.[10][11][12]

Among the casualties were several other foreigners including one German, one British[13], two Austrians, two Tajikistan citizens, and one Uzbekistan citizen.

According to the Slovak embassy in Moscow, Slovak actress Zuzana Fialová was injured in the blast.[14]

Aftermath of the attack

A number of flights originally bound for Domodedovo were redirected to Moscow's Vnukovo International Airport following the attack.[8] Russian authorities contacted all the Russian airports to immediately start mandatory inspections of all visitors before allowing them to enter the airport buildings.[16]

At Domodedovo, the surge of emergency vehicles caused delays for public transportation. As a result, many car owners present at the time volunteered to carpool passengers to Moscow.[17]

The blast was followed by a drop of almost two percent at the Moscow stock exchange (MICEX).[1]

On 8 February 2011, a faction of the Caucasus Emirate led by Doku Umarov claimed responsibility for the attack,[18] and threatened further attacks.[19]

President Dmitry Medvedev apportioned some blame to poor security at Domodedovo and sacked several officials – said to include a regional transport chief and a Moscow police deputy head;[20] he also announced that he would delay his departure to the World Economic Forum in Davos, Switzerland.[8] Prime Minister Vladimir Putin condemned the bombing as an "abominable crime," and vowed that "retribution is inevitable."[21] On February 8, 2011, following the criticism on the airport security, Putin fired the head of Russian government agency that supervises the transport infrastructure in Russia.[22]

Many world leaders have expressed their condolences to Russia following the attack.[23][24]

President of the European Council Herman Van Rompuy said that those responsible for the attack must be punished.[25]

The Chechen Republic of Ichkeria, the former separatist government in exile (which split from the other half which would become the Caucasus Emirate in 2007), released a statement sending condolences to the victims, suggesting the attackers may have been desperate, traumatized and hopeless, and strongly condemning the bombing.[61]

In the aftermath of the explosion, Russia's Investigative Committee stated that the bombing was aimed "first and foremost" at foreign citizens, adding that "it was by no means an accident that the act of terror was committed in the international arrivals hall".[62]

On February 7, 2011, Russian officials announced that the suspected suicide bomber was identified as 20-year-old Magomed Evloev (not to be confused with the journalist of the same name killed in 2008), born in the village of Ali-yurt, Ingushetia.

Magomed Evloyev's 16-year-old sister Fatima Evloeva and friend Umar Aushev were suspected of collaboration in the Domodedovo attack and detained in February 2011. They were released few months later, being under the investigation on the charges of the illegal possesion of firearms.[63] In September 2011, Fatima Evloeva and Umar Aushev were no longer suspects and cleared off any charges.[64]

In February and March 2011, Russian law enforcement agencies conducted special operations against members of the Caucasus Emirate terrorist organization in Ingushetia, during which they arrested several associates of the Domodedovo attack bomber, including Islam Yandiev and Ilez Yandiev.[65][66]

By October 2011, the following alleged associates of Magomed Evloev were arrested and brought up on the charges of terrorism, formation/participation in illegal armed bands, assault on a police officer, and illegal possesion of firearms and explosives: Akhmed Evloev, suicide bomber's 15-year-old brother, who allegedly assisted with assembling the bomb, Islam Yandiev, Ilez Yandiev, and Bashir Khamkhoev.[67] Leader of Caucasus Emirate, Doku Umarov, who is a suspected mastermind behind the Domodedovo attack, has not been apprehended.

A separate investigation was conducted in regards to the lax or inefficient security measures that were in place in the Domodedovo airport at the time of the attack. In the immediate aftermath of the terrorist attack, following the government order, the Domodedovo Airport started to conduct mandatory inspections and/or pat-downs of all passengers and visitors entering the terminal building. This practice was however ruled illegal by an appellate court in June 2011.[68]