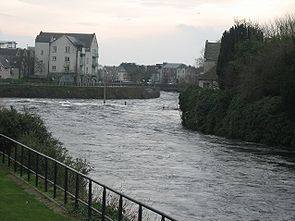 The River Corrib (Irish -Abhainn na Gaillimhe) in the west of Ireland flows from Lough Corrib through Galway to Galway Bay. The river is among the shortest in Europe, with only a length of six kilometres from the lough to the Atlantic. It is popular with local whitewater kayakers and is the training ground of NUI, Galway Kayak club, as well as several rowing clubs. The depth of this river reaches up to 94 feet.

The translation of the Irish name of the river is Galway river i.e. from Gaillimh. In Irish it is sometimes called An Ghaillimh ("the Galway") and also incorrectly called Abhainn na Coiribe. The legend concerning its naming states that it was called after Gaillimh inion Breasail, the daughter of a Fir Bolg chieftain who drowned in the river. The word Gaillimh is believed to mean "stony" as in "stony river". The commonly held myth that the city takes its name from the Irish word Gallaibh, "foreigners" i.e. "the town of the foreigners" (from Gall, a foreigner) is incorrect as the name Gaillimh was applied to the river first and then later onto the town. Indeed, the earliest settlement at Galway was called Dún Bhun na Gaillimhe, or "the town at the end of the Galway (river)". 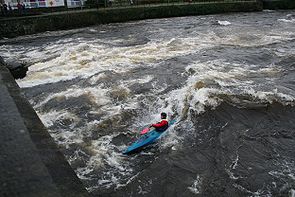 The river gave its name to the town, which grew to a city, and from c. 1570 onwards, the city gave its name to the county. It also aided massively in the industrial development of the town, allowing it to develop electrical power before London. At the height of water power, there were over twenty water wheels in operation from races built on the river and its accompanying cut, the Eglinton Canal, which was built as part of the "Drainage and Navigation scheme of Lough Carra, Lough Corrib and Lough Mask" in the mid-19th century. The canal, which is about three quarters of a mile long, had a sea-lock, a large basin, a second lock at Parkavore and five swivelling bridges. It is still in water but the swivelling bridges have been replaced by fixed bridges; the last vessel to use the navigation was the Amo II, a 90' motor-yacht that had been sold by the Guinness trustees to Frank Bailey, a Galway hotelier.[1]

Lough Corrib is the anglicised form of Loch Coirib which itself is a corruption of Loch nOrbsean which according to placename lore is named after the Irish god of the sea. There is good fishing to be had on both the lake and river.

The part of the river that flows from the southern end of the lake to the Salmon Weir is known as the Upper Corrib. The weir, a set of weir gates also built during the above navigation scheme, was originally built from stone and timber but now only two of these gates remain and are only opened in times of flood. The rest have been replaced by fourteen steel gates, as shown in the photograph above.

The section of the river that runs from the Salmon Weir through Galway city and out into Galway Bay is known as the Lower Corrib. Three bridges cross the Lower - the Salmon Weir Bridge, William O'Brien Bridge and Wolfe Tone Bridge.

The only tributary of the Lower Corrib is Sruthán na gCaisláin (Castle Stream), a small stream that flows through Newcastle, the grounds of NUI, Galway, and empties into the Lower just downstream of King's weir, commonly known as the fish gates.