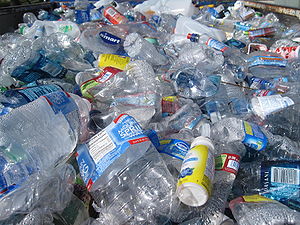 Sorted household plastic waiting to be hauled away for reprocessing. 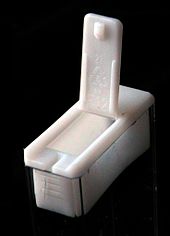 Polypropylene lid of a Tic Tac box, with a living hinge and the resin identification code under its flap

The SPI resin identification coding system is a set of symbols placed on plastics to identify the polymer type. It was developed by the Society of the Plastics Industry (SPI) in 1988, and is used internationally. The primary purpose of the codes is to allow efficient separation of different polymer types for recycling.

The symbols used in the code consist of arrows that cycle clockwise to form a rounded triangle and enclosing a number, often with an acronym representing the plastic below the triangle. When the number is omitted, the symbol is known as the universal Recycling Symbol, indicating generic recyclable materials. In this case, other text and labels are used to indicate the material(s) used. Previously recycled resins are coded with an "R" prefix (for example, a PETE bottle made of recycled resin could be marked as RPETE using same numbering).

Contrary to misconceptions, the number does not indicate how hard the item is to recycle, nor how often the plastic was recycled. It is an arbitrarily-assigned number that has no other meaning aside from identifying the specific plastic.

The Unicode character encoding standard includes the resin identification codes, between code points U+2673 and U+2679 inclusive. The generic material recycling symbol is encoded as code point U+267A.

Use of the recycling symbol in the coding of plastics has led to ongoing consumer confusion about which plastics are readily recyclable. In many communities throughout the United States, PETE and HDPE are the only plastics collected in municipal recycling programs (e.g. Mackinaw City, Michigan). Some regions, though, are expanding the range of plastics collected as markets become available. (Los Angeles, for example, recycles all clean plastics numbered 1 through 7.[2])

In 2007, a State Senate bill in California (SB 898) proposed adding a "0" code for compostable polylactic acid.[3] However, this provision of the bill was removed before passage.[4][5]