The Old Curiosity Shop tells the story of Nell Trent, a beautiful and virtuous young girl of 'not quite fourteen.' An orphan, she lives with her maternal grandfather (whose name is never revealed) in his shop of odds and ends. Her grandfather loves her dearly, and Nell does not complain, but she lives a lonely existence with almost no friends her own age. Her only friend is Kit, an honest boy employed at the shop, and whom she is teaching to write. Secretly obsessed with ensuring that Nell does not die in poverty as her parents did, her grandfather attempts to make Nell a good inheritance through gambling at cards. He keeps his nocturnal games a secret, but borrows heavily from the evil Daniel Quilp, a malicious, grotesquely deformed, hunchbacked dwarf moneylender. In the end, he gambles away what little money they have, and Quilp seizes the opportunity to take possession of the shop and evict Nell and her grandfather. Her grandfather suffers a breakdown that leaves him bereft of his wits, and Nell takes him away to the Midlands of England, to live as beggars.

Convinced that the old man has stored up a fortune for Nell, her wastrel brother Frederick convinces the good-natured but easily-led Dick Swiveller to help him track Nell down so that Swiveller can marry her and the two can share Nell's supposed inheritance. To this end, they join forces with Quilp, who knows full well that there is no fortune, but sadistically chooses to 'help' in order to enjoy the misery it will inflict on all concerned. Quilp begins to try to track Nell down, but the fugitives are not easily discovered. To keep Dick Swiveller under his eye, Quilp arranges for him to be taken as a clerk by Quilp's lawyer, Mr. Brass. At the Brass firm, Dick befriends the mistreated servant maid and nicknames her 'the Marchioness'. Nell, having fallen in with a number of characters, some villainous and some kind, succeeds in leading her grandfather to safe haven in a far off village (identified by Dickens as Tong, Shropshire), but this has come at a considerable cost to Nell's health.

Meanwhile, Kit, having lost his job at the curiosity shop, has found new employment with the kind Mr and Mrs Garland. Here he is contacted by a mysterious 'single gentleman' who is looking for news of Nell and her grandfather. The 'single gentleman' and Kit's mother go after them unsuccessfully, and encounter Quilp, who is also hunting for the runaways. Quilp forms a grudge against Kit and has him framed as a thief. Kit is sentenced to transportation. However, Dick Swiveller proves Kit's innocence with the help of his friend the Marchioness. Quilp is hunted down and dies trying to escape his pursuers. At the same time, a coincidence leads Mr Garland to knowledge of Nell's whereabouts, and he, Kit, and the single gentleman (who turns out to be the younger brother of Nell's grandfather) go to find her. Sadly, by the time they arrive, Nell has died as a result of her arduous journey. Her grandfather, already mentally infirm, refuses to admit she is dead and sits every day by her grave waiting for her to come back, until a few months later, he dies himself.

The events of the book seem to take place around 1825. In Chapter 29, Miss Monflathers refers to the death of Lord Byron, who died on April 19, 1824. When the inquest rules (incorrectly) that Quilp committed suicide, his corpse is ordered to be buried at a crossroads with a stake through its heart, a practice banned in 1826. And Nell's grandfather, after his breakdown, fears that he shall be sent to a madhouse, and there chained to a wall and whipped; these practices went out of use after about 1830. In Chapter 13, the lawyer Mr. Brass is described as "one of Her Majesty's attornies" [sic], putting him in the reign of Queen Victoria, which began in 1837, but given all the other evidence, and the fact that Kit, at his trial, is charged with acting "against the peace of our Sovereign Lord the King" (referring to George IV), this must be a slip of the pen.

Master Humphrey's Clock was a weekly serial that contained both short stories and two novels (The Old Curiosity Shop and Barnaby Rudge). Some of the short stories act as frame stories to the novels.

Originally the conceit of the story was that Master Humphrey was reading it aloud to a group of his friends, gathered at his house around the grandfather clock in which he eccentrically kept his manuscripts. Consequently, when the novel begins, it is told in the first person, with Master Humphrey the narrator. However, Dickens soon changed his mind about how best to tell the story, and abandoned the first-person narrator after chapter three. Once the novel was ended, Master Humphrey's Clock added a concluding scene, where Master Humphrey's friends (after he has finished reading the novel to them) complain that the 'single gentleman' is never given a name; Master Humphrey tells them that the novel was a true story, that the 'single gentleman' was in fact Master Humphrey himself, and that the events of the first three chapters were fictitious, intended only to introduce the characters. This was Dickens' after-the-fact explanation of why the narrator disappeared and why (if he was their near relation) he gave no sign in the first three chapters of knowing who they were. It is a clumsy device, and at least one editor thinks 'it need not be taken seriously.'[1]

Characters in The Old Curiosity Shop

"At Rest" Illustation by George Cattermole

Probably the most widely-repeated criticism of Dickens is Oscar Wilde's remark that 'One would have to have a heart of stone to read the death of little Nell without dissolving into tears...of laughter.' Of a similar opinion was the poet Algernon Swinburne, who called Nell "a monster as inhuman as a baby with two heads."[4]

The Irish leader Daniel O'Connell famously burst into tears at the finale, and threw the book out of the window of the train in which he was travelling.

The hype surrounding the conclusion of the series was unprecedented; Dickens fans were reported to storm the piers of New York City, shouting to arriving sailors (who might have already read the last instalment in the United Kingdom), "Is Little Nell alive?" In 2007, many newspapers claimed the excitement at the release of the last volume The Old Curiosity Shop was the only historical comparison that could be made to the excitement at the release of the last Harry Potter novel, Harry Potter and the Deathly Hallows.[5]

The Norwegian authoress Ingeborg Refling Hagen, is allegedly said to have buried a copy of the book in her youth, stating that nobody deserved to read about Nell, because nobody would ever understand her pain. She compared herself to Nell, because of her own miserable situation at the time. 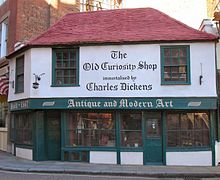 A shop named 'The Old Curiosity Shop' can be found at 13–14 Portsmouth Street, Westminster, London, WC2A 2ES, in amongst the London School of Economics. The building dates back to the sixteenth century, but this name was added after the novel was released, as it was thought to be the inspiration for Dickens' description of the antique shop. At one time it functioned as a dairy on an estate given by King Charles II to one of his many mistresses. It was made using the wood from old ships and the building survived the bombs of Second World War. There is also a shop in Broadstairs called The Old Curiosity Shop, where Dickens rented a home.

Nell and her Grandfather meet Codlin and Short in a Churchyard in Aylesbury. The Races where Nell and her Grandfather go to with the show people are at Banbury. The village where they first meet the schoolmaster is Warmington, Warwickshire. They meet Mrs. Jarley near the village of Gaydon, Warwickshire. The town where they work at Jarley's Waxworks is Warwick. The heavily industrialised town where Nell spends the night by the furnace is Birmingham, after they have travelled on the Warwick and Birmingham Canal. The town in which Nell faints and is rescued by the school master is Wolverhampton in the Black Country. The village where they finally find peace and rest and where Nell dies is Tong, Shropshire.[6]

Adaptations for the cinema, TV, radio and theatre

There were several silent movie adaptations of the novel.