The Posthumous Papers of the Pickwick Club (also known as The Pickwick Papers) is the first novel by Charles Dickens. After the publication, the widow of the illustrator Robert Seymour claimed that the idea for the novel was originally her husband's; however, in his preface to the 1867 edition, Dickens strenuously denied any specific input, writing that "Mr Seymour never originated or suggested an incident, a phrase, or a word, to be found in the book."

Dickens was asked to contribute to the project as an up and coming writer following the success of Sketches by Boz, published in 1836 (most of Dickens' novels were issued in shilling instalments before being published in the complete volume). Dickens (still writing under the pseudonym of Boz) increasingly took over the unsuccessful monthly publication after Seymour had committed suicide.

With the introduction of Sam Weller in chapter 10, the book became the first real publishing phenomenon, with bootleg copies, theatrical performances, Sam Weller joke books, and other merchandise.

Written for publication as a serial, The Pickwick Papers is a sequence of loosely-related adventures. The action is given as occurring 1827–8, though critics have noted some seeming anachronisms.[1] The novel's main character, Samuel Pickwick, Esquire, is a kind and wealthy old gentleman, and the founder and perpetual president of the Pickwick Club. To extend his researches into the quaint and curious phenomena of life, he suggests that he and three other "Pickwickians" (Mr Nathaniel Winkle, Mr Augustus Snodgrass, and Mr Tracy Tupman) should make journeys to remote places from London and report on their findings to the other members of the club. Their travels throughout the English countryside by coach provide the chief theme of the novel. A distinctive and valuable feature of the work is the generally accurate descriptions of the old coaching inns of England.[2] 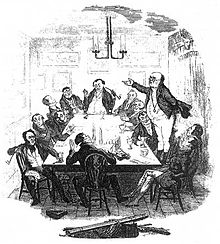 Its main literary value and appeal is formed by its numerous memorable characters. Each character in The Pickwick Papers, as in many other Dickens novels, is drawn comically, often with exaggerated personalities. Alfred Jingle, who joins the cast in chapter two, provides an aura of comic villainy. His devious tricks repeatedly land the Pickwickians in trouble. These include Jingle's nearly-successful attempted elopement with the spinster Rachael Wardle of Dingley Dell manor, misadventures with Dr Slammer, and others.

Further humour is provided when the comic cockney Sam Weller makes his advent in chapter 10 of the novel. First seen working at the White Hart Inn in The Borough, Weller is taken on by Mr Pickwick as a personal servant and companion on his travels and provides his own oblique ongoing narrative on the proceedings. The relationship between the idealistic and unworldly Pickwick and the astute cockney Weller has been likened to that between Don Quixote and Sancho Panza.[3]

Other notable adventures include Mr Pickwick's attempts to defend a lawsuit brought by his landlady, Mrs Bardell, who (through an apparent misunderstanding on her part) is suing him for the breach of promise to marry her. Another is Mr Pickwick's incarceration at Fleet prison for his stubborn refusal to pay the compensation to her because he doesn't want to give a penny to Mrs. Bardell's lawyers, the unscrupulous firm of Dodson and Fogg. The general humorous tone is here briefly replaced by biting social satire (including against the legal establishment) and foreshadows major themes in Dickens' later books. 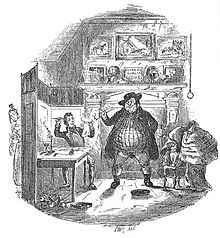 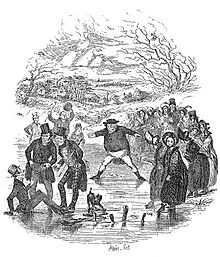 The novel has been filmed at least four times:

There was also a London stage musical version entitled Pickwick, by Cyril Ornadel, Wolf Mankowitz, and Leslie Bricusse. It starred Harry Secombe, later to become more famous as Mr. Bumble in the film version of Oliver!. But Pickwick (the musical) was not a success in the United States when it opened there in 1965, and the show was never filmed. It did feature the song If I Ruled the World, which became a modest hit.

Part of the Pickwick Papers featured in Charles Dickens' Ghost Stories, a 60 minute animation made by Emerald City Films (1987). Including The Ghost in the Wardrobe, The Mail Coach Ghosts, and The Goblin and the Gravedigger. 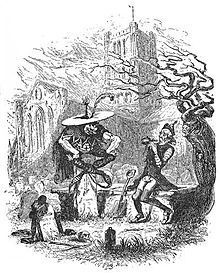 The Goblin and the Sexton 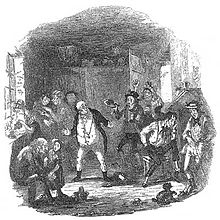 Discovery of Jingle in the Fleet

The novel was published in 19 issues over 20 months; the last was double-length and cost two shillings. In mourning for his sister-in-law Mary Hogarth, Dickens missed a deadline and consequently there was no number issued in May 1837. Numbers were typically issued on the last day of its given month:

It is interesting to keep the number divisions and dates in mind while reading the novel, especially in the early parts. The Pickwick Papers, as Charles Dickens's first novel, is particularly chaotic: the first two numbers featured four illustrations by Robert Seymour and 24 pages of text. Seymour killed himself and was replaced by R.W. Buss for the third number; the format was changed to feature two illustrations and 32 pages of text per issue. Buss didn't work out as an illustrator and was replaced by H.K. "Phiz" Browne for the fourth issue; Phiz continued to work for Dickens for 23 years (he last illustrated A Tale of Two Cities in 1859).

As a testament to the book's popularity, many other artists, beyond the three official illustrators, created drawings without the approval of the author or publisher, sometimes for bootleg copies or hoping that "Extra Plates" for the original issue would be included in later issues. The artists included William Heath, Alfred Henry Forrester ("Alfred Crowquill"), Thomas Onwhyn (who sometimes signed as "Sam Weller") and Thomas Sibson. In 1899 Joseph Grego collected 350 Pickwick Paper illustrations, including portraits based on stage adaptations, with other notes and commentary in Pictorial Pickwickiania[7]

In 1841 the three-volume anthology titled The Pic-Nic Papers[8] was published composed of miscellaneous pieces by various authors. It was originated by Dickens to benefit the widow and children of 28-year old publisher John Macrone, who died suddenly in 1837. Dickens had begun soliciting submissions in 1838, and he eventually contributed the "Introduction" and one short story "The Lamplighter's Story". Other contributors included William Harrison Ainsworth, Thomas Moore, Leitch Ritchie and Agnus Strickland. Macrone's widow eventually received 450 pounds from this charitable publication.[9]

"In the young Charles Dickens's reading we have in some ways the very core of his novels...the young Charles came upon the great picaresque novels of the eighteenth century – Roderick Random, Peregrine Pickle, Humphrey Clinker, Tom Jones, The Vicar of Wakefield, their French counterpart Gil Blas, and their great predecessor Don Quixote. Don Quixote's connection with Mr. Pickwick, as Dostoevsky saw, is basic. With Don Quixote, of course, goes Sancho Panza, who with the reinforcement of the faithful, shrewd, worldly servants of the young heroes Tom Jones, Peregrine Pickle, Roderick Random and the rest, goes to make up Sam Weller." [10]