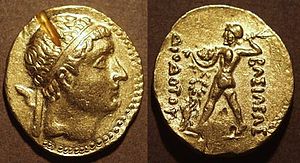 Diodotus II (c. 252 BC – c. 223 BC) was a Greco-Bactrian king from c. 239 BC, son of Diodotus I. He is known for concluding a peace treaty with the Parthian king Arsaces, in order to forestall the Seleucid reconquest of both Parthia and Bactria:

"Soon after, relieved by the death of Diodotus I, Arsaces made peace and concluded an alliance with his son, also by the name of Diodotus; some time later he fought against Seleucos who came to punish the rebels, but he prevailed: the Parthians celebrated this day as the one that marked the beginning of their freedom" (Justin, XLI,4 [1])

Around 230 or 223 BC, Diodotus was killed by an usurper, his brother-in-law Euthydemus I, founder of the Greco-Bactrian Euthydemid dynasty (Polybius, 11.34, 2).