This event is recorded by Trogus, Prol. 41; Justin xli. 4, 5, where he is called Theodotus; Strabo xi. 515). The name apparently is related to the title Soter he uses for himself. His power seems to have extended over the neighbouring provinces. Diodotus was a contemporary, a neighbour, and probably an ally of Andragoras, the satrap of Parthia, who at about the same time also proclaimed independence from the Seleucid Empire. 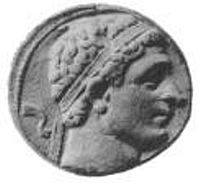 Diodotus wrested independence for his territory after the death of the Seleucid ruler Antiochus II, who had been embroiled in a war against Ptolemaic Egypt:

Diodotus, the governor of the thousand cities of Bactria (Latin: "Theodotus, mille urbium Bactrianarum praefectus"), defected and proclaimed himself king; all the other people of the Orient followed his example and seceded from the Macedonians. (Justin, XLI,4 [2])

The new kingdom, highly urbanized and considered as one of the richest of the Orient (opulentissimum illud mille urbium Bactrianum imperium "The extremely prosperous empire of the thousand cities of Bactria" Justin, XLI,1 [3]), was to further grow in power and engage into territorial expansion to the east and the west:

"The Greeks who caused Bactria to revolt grew so powerful on account of the fertility of the country that they became masters, not only of Ariana, but also of India, as Apollodorus of Artemita says: and more tribes were subdued by them than by Alexander... Their cities were Bactra (also called Zariaspa, through which flows a river bearing the same name and emptying into the Oxus), and Darapsa, and several others. Among these was Eucratidia, which was named after its ruler." (Strabo, XI.XI.I [4])

Arsaces, the chieftain of the nomadic (Dahan) tribe of the Parni, fled before him into Parthia and there eliminated Andragoras, the former satrap and self-proclaimed king of Parthia, and became the founder of the Parthian Empire (Strabo l.c.). The Greco-Bactrians became cut from direct contacts with the Greek world. Overland trade continued at a reduced rate, while sea trade between Greek Egypt and Bactria developed. When Seleucus II in 239 BC attempted to subjugate the rebels in the east, it appears he and Diodotus united together against the Parthians (Justin xli. 4, 9).

"Soon after, relieved by the death of Theodotus [Justin uses a erroneous version of the name], Arsaces made peace and concluded an alliance with his son, also by the name of Theodotus; some time later he fought against Seleucus who came to punish the rebels, and he prevailed: the Parthians celebrated this day as the one that marked the beginning of their freedom" (Justin, XLI,4 [5])

Gold stater of Diodotus in the name of the Seleucid emperor Antiochus I Soter, c. 250 BCE. Diodotus effectively declared his independence from Seleucid control by placing his own portrait on the obverse of the coin, and replacing Antiochos's preferred deity Apollo with the Zeus shown on this coin.

Of Diodotus I we possess gold, silver and bronze coins, some of which are struck in the name of Antiochos. As the power of the Seleucids was weak and continually attacked by Ptolemy II, the eastern provinces and their Greek cities were exposed to the invasion of the nomadic barbarians and threatened with destruction (Polyb. xi. 34, 5); thus the erection of an independent kingdom may have been a necessity and indeed an advantage to the Greeks, and this epithet well deserved. Diodotus Soter appears also on coins struck in his memory by the later Graeco-Bactrian kings Agathocles and Antimachus. Cf. AV Sallet, Die Nachfolger Alexanders d. Gr. in Baktrien und Indien; Percy Gardner, Catal. of the Coins of the Greek and Scythian Kings of Bactria and India (Brit. Mus.).