Devenish or Devinish[1] (from Irish: Daimhinis, meaning "ox island") is an island in Lower Lough Erne, County Fermanagh, Northern Ireland. Aligned roughly north–south, it is about one and a quarter miles long and two-thirds of a mile wide. The main place to get a ferry to the island is at Trory Point, just outside Enniskillen.

Devenish contains one of the finest monastic sites in Northern Ireland. A round tower thought to date from the 12th century is situated on the island, as are the walls of the Oratory of Saint Molaise who established the monastery in the 6th century, on a pilgrim route to Croagh Patrick in County Mayo. It became a centre of scholarship and although raided by Vikings in 837 and burned in 1157, it later flourished as the site of the parish church and St Mary’s Augustinian Priory.

Painting of the 12th Century round tower and abbey on Devenish Island, Lough Erne

There are extensive low earthworks on the hillside, but the earliest buildings are St Molaise's House (a very small church) and the fine round tower close by, both with accomplished Romanesque decoration of the 12th century. The round tower is some 30 metres (100ft) tall and can be climbed using internal ladders. It features a sculptured Romanesque cornice of heads and ornament under the conical stone roof. Nearby is a cross carved with spiral patterns and human heads. There are also several cross-slabs, one with an interlace design and a mediaeval carved cross. Near the round tower, the foundations of another tower were found, which the present tower probably superseded.[2]

The smallest of the three churches (Mo-Laisse's House, named after the founder of the monastery) dates from the late 12th or early 13th century. It has narrow antae with bases carved with classical motifs. Only the lower parts of the walls and some of the roofstones survive.[2]

Teampull Mór, the lower church, dates from the early 13th century with a beautifully moulded south window. It was extended to the east in about 1300, and later additions include a residential wing to the north and the Maguire Chapel to the south, with 17th century heraldic slabs. 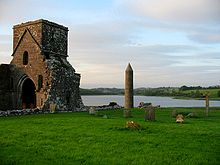 Oratory of Saint Molaise and Round tower on Devenish Island

On the hilltop sits St Mary's Augustinian Priory which is of the mid 15th century and early 16th century, with church, tower and small north cloister. The priory has an intricately carved mid 15th century high cross in its graveyard.

There are several hundred loose architectural fragments on the site and among them are over 40 stones from an otherwise lost, richly-decorated Romanesque church. Some of the many loose stones are displayed and set in their historical context in the small visitor centre.