The Main Western Railway is a major railway in New South Wales, Australia. It runs through the Blue Mountains, Central West, North West Slopes and the Far West regions. 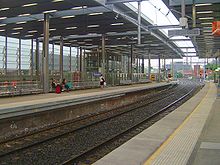 Parramattta is a major station in Sydney

The Main Western Railway Line is a westwards continuation of what is known as the Main Suburban Line between Sydney Central station and Parramatta. The line is six electrified railway tracks between Central and Strathfield, where the Main Northern line branches off. The line is then four tracks as it passes through Lidcombe, where the Main Southern Line branches off, and then through the Sydney suburbs of Parramatta and Blacktown, where the Richmond railway line branches off. At St Marys, the line becomes two tracks as it passes through Penrith and Emu Plains, the extent of Sydney suburban passenger train operation. From Emu Plains, the line traverses the Blue Mountains passing through the townships of Katoomba and Mount Victoria before descending down the western side of the Blue Mountains through ten tunnels to the town of Lithgow. Lithgow is the extent of electric passenger train services, although the electric wires extend to the town of Bowenfels west of Lithgow. The line then proceeds through Wallerawang, where the line becomes single track, and then passes through Tarana, Bathurst, Blayney, Orange (where the Broken Hill line branches), Wellington, Dubbo, Narromine, Nevertire, Nyngan, Byrock and Bourke. The section between Nyngan and Bourke is now closed. A daily passenger train service operates as far as Dubbo. 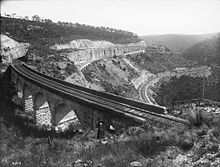 Bowenfels, the former limit of electrification

The Sydney Railway Company, a private company established to serve the interests of the port of Sydney, announced proposals to build a railway line to Bathurst in 1848. The company was taken over by the New South Wales government in 1854, and in 1855 the first railway in the state was opened between Sydney and the present-day Granville (see Rail transport in New South Wales). This railway was extended from Granville to the current Parramatta station and Blacktown in 1860 and Penrith in 1863.

The railway then crossed the Blue Mountains between 1867 and 1869. The Blue Mountains were a significant geographical barrier to the development of western New South Wales, and the crossing required significant feats of engineering for the railways, including two 'Zig Zags': one for the ascent at Lapstone, and another for the western descent. The first "little" zigzag line opened near Glenbrook in 1867 as part of the ascent of Lapstone Hill on a gradient of 1 in 30-33. It was built with comparatively light earthwork, although it included a substantial seven-span sandstone viaduct (the Knapsack Viaduct) built by engineer, John Whitton. By 1910, the line was replaced with a gentler alignment with 1 in 60 (1.67%) grades. The line reached Wentworth Falls in 1867 and Mount Victoria in 1868.

On the western descent form the Blue Mountains, the Lithgow Zig Zag Railway, was constructed between 1866 and 1869. It was laid out in the shape of a 'Z' including reversing points. It involved extremely heavy rock cuttings, three fine stone viaducts with 30-foot (9 m) semi-circular arches and a short tunnel. The Lithgow Zig Zag was replaced in 1910 by a deviation, which included ten tunnels.[1]

From the western foot of the Blue Mountains, the line was promptly extended to Wallerawang by 1870, Tarana in 1872, Bathurst, Blayney in 1876 and Orange in 1877.

By 1877, there was significant political pressure to minimise the diversion of trade from western New South Wales to Victoria and South Australia via river trade along the Darling and Murray Rivers.[2] The town of Bourke had become the key centre for pastoralists in western New South Wales since its formation in 1861. Provision was thus made to extend the line to Dubbo, reaching Wellington in 1880 and Dubbo in 1881. At the time, Dubbo had grown into a town of strategic importance on the stock routes between northern New South Wales and the Victorian goldfields.

Beyond Dubbo, the railway opened up new land to European settlement, and was directly responsible for the development of townships. The line reached the future site of Narromine in 1883, and the railway station was the first building in the future settlement. The line reached the site of Nevertire in 1882, serving the nearby established village of Warren (a branch opened to Warren in 1898). Construction reached the site of Nyngan in 1883, with the nearby coach-stop village of Canonbar moving in its entirely to establish the town of Nyngan. Beyond Nyngan, the line swept across the plains in a straight line for 116 miles (187 km), then the longest stretch of straight railway line in the world. It reached the temporary terminus of Byrock in 1884 before reaching its final destination of Bourke in 1885.[3]

Wool and livestock was the main source of goods traffic on the line throughout its life. In the 1890s, a severe drought caused a significant downturn in traffic, and additional lines to Brewarrina (in 1901) and Walgett (in 1908) reduced its catchment area. The line beyond Dubbo became loss-making in 1901, and continued that way throughout its existence. Tonnages increased following World War 2, but declined from the 1970s. Passenger services beyond Dubbo ended in 1974.

In the 1950s, the inner section of the line over the Blue Mountains was electrified primarily as a means of easing the haulage of coal freight from the western coalfields to the coastal ports,[4] but a by-product of this programme was the introduction of electric interurban passenger services as far west as Bowenfels, later cut back to the current terminus of Lithgow.[5] Since the late 1990s goods trains are now exclusively diesel hauled, with the only electric trains being passenger services using double deck interurban cars.

In the 1990s the operate of interstate freight, the National Rail Corporation, made the decision to divert Sydney- Perth traffic from the Blue Mountains section, to travel via the Main South to Cootamundra, and then via the cross country line to Parkes. This resulted in reduced goods traffic and subsequent reduction of the line between Wallerawang and Tarana from double to single track.[6] Significant flooding saw the line cut between Nyngan and Bourke in 1989, and the army destroyed a section of track north of Nyngan to relieve flood waters surrounding the town. It was not financially viable to repair and maintain the line, and the line was thus abandoned between Nyngan and Bourke.[7]

Many branch lines were built from the Main Western Line, some of which remain operational.

Goods traffic continues as far as Nyngan, to and from the Cobar branch which connects at this point. Passenger traffic (one train per day) operates to Dubbo. The section between Sydney and Orange carries the Indian Pacific train to Perth (via the Broken Hill line), and the section to Lithgow carries electric commuter trains to and from Sydney (the Blue Mountains Line).