The former territory is now in the Belgian city of Kelmis. Today, it is especially of interest to Esperantists because of initiatives to found an Esperanto-speaking state on the territory in the early 20th century.

After the demise of Napoleon's Empire, the Congress of Vienna of 1814/1815 redrew the European map, aiming at creating a balance of power. One of the borders to be delineated was the one between the newly-founded United Kingdom of the Netherlands and the Kingdom of Prussia. Both parties could agree on the larger part of the territory, as borders mostly followed older lines, but the district of Moresnet proved problematic, mainly because of the valuable zinc spar mine called Altenberg (German) or Vieille Montagne (French) located there. Both the Netherlands and Prussia were keen to appropriate this resource, which was needed in the processing of zinc and brass - at that time, Bristol in England was the only other place where zinc was processed.[2]

In December 1815, Dutch and Prussian representatives convened in nearby Aachen and on 26 June 1816 a compromise was reached, dividing the district of Moresnet into three parts. The village of Moresnet itself would become part of the Dutch province of Liège, whereas the village Prussian Moresnet (renamed Neu-Moresnet after World War I) would become part of the Prussian Rhine province, and the mine and the adjacent village - would become a neutral territory pending a future agreement. The two powers, both barred from occupying the area with their military, established a joint administration.

When Belgium gained its independence from the Netherlands in 1830, the Belgians took over the Dutch role in Neutral Moresnet (though formally the Dutch never ceded their claim).

Formal installation of border demarcation markers for the territory occurred on 23 September 1818. The new territory of Neutral Moresnet had a more-or-less triangular shape with the base being the main road from Aachen to Liège. The village and mine lay just to the north of this road. To east and west two straight lines converged on the Vaalserberg.

While the roads leading from Germany and Belgium to the "Three Country Point" on the Vaalserberg today bear the names, respectively, of Dreiländerweg ("Three-Countries-Way") and Route des Trois Bornes ("Three Boundary Stones Road"), the road coming from the Netherlands is called Viergrenzenweg ("Four Borders Way"), recalling the fact that once four territories met at this quadripoint.[3]

From 1883, Neutral Moresnet used a tricolore with horizontal bars in black, white and blue as its territorial flag. The origin is unclear and has been explained in two different ways:[4]

Neutral Moresnet on a postcard ca. 1900

The territory was governed by two royal commissioners, one from each neighbour. Eventually, these commissioners were commonly civil servants from the Belgian Verviers and the Prussian Eupen. The municipal administration was headed by a mayor appointed by the commissioners.

The Napoleonic civil and penal codes, introduced under French rule, remained in force throughout the existence of Neutral Moresnet. However, since no law court existed in the neutral territory, Belgian and Prussian judges had to come in and decide cases based on the Napoleonic laws. Since there was no administrative court either, the mayor's decision could not be appealed.

In 1859, Neutral Moresnet was granted a greater measure of self-administration by the installation of a municipal council of ten members. The council, as well as a welfare committee and a school committee, were appointed by the mayor and served an advisory function only. The people had no voting rights.[5]

Life in Neutral Moresnet was dominated by the Vieille Montagne mining company, which not only was the major employer but also operated residences, shops, a hospital and a bank. The mine attracted many workers from the neighboring countries, increasing the population from 256 in 1815 to 2,275 in 1858 and 4,668 in 1914. Most services such as the mail were shared between Belgium and Prussia (in a fashion similar to Andorra). There were five schools in the territory, and Prussian subjects could attend the schools in Prussian Moresnet.

Living in the territory had several benefits. Among these were the low taxes (the national budget being fixed at 2,735 fr. throughout its history), the absence of import tariffs from both neighbouring countries, and low prices compared to just across the border. A downside to their special status was the fact that people from Neutral Moresnet were considered to be stateless and were not allowed a military of their own. However, there is no record of Neutral Moresnet taking a hostile international stance.

Many immigrants settled in Moresnet so they would be exempt from military service, but in 1854 Belgium began to conscript its citizens who had moved to Moresnet, and Prussia did likewise in 1874. From then on, the exemption applied only to descendants of the original inhabitants.[6]

Neutral Moresnet did not have its own currency. The French Franc was legal tender. The currencies of Prussia (and then Germany, after 1871), Belgium and the Netherlands were also in circulation.[7] 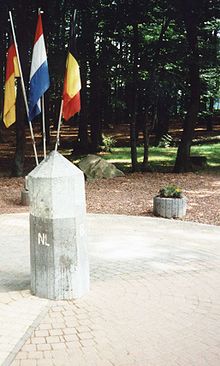 The Three-Country Point on the Vaalserberg today. Until 1915 this was also the location of Neutral Moresnet's apex.

When the mine was exhausted in 1885, doubts arose about the continued survival of Neutral Moresnet. Several ideas were put forward to establish the territory as a more independent entity:

In 1886, Dr. Wilhelm Molly (1838–1919), the mine's chief medical doctor and an avid philatelist, tried to organise a local postal service with its own stamps. This enterprise was quickly thwarted by Belgian intervention.[8]

A casino was established in August 1903 after Belgium had forced all such resorts to close. The Moresnet casino operated under strict limitations, permitting no local resident to gamble, and no more than 20 persons to gather at a time. The venture was abandoned, however, when the Prussian king threatened to partition the territory or cede it to Belgium in order to end the gambling. Around this same time, Moresnet boasted three distilleries for the manufacture of gin.[9]

The most remarkable initiative occurred in 1908, when Dr. Molly proposed making Neutral Moresnet the world's first Esperanto-speaking state, named Amikejo ("place of friendship"). The proposed national anthem was an Esperanto march of the same name. A number of residents learned Esperanto and a rally was held in Kelmis in support of the idea of Amikejo on 13 August 1908. The World Congress of Esperanto, meeting in Dresden, even declared Neutral Moresnet the world capital of the Esperanto community.[8] Esperanto still plays a prominent role in the society of Kelmis.

However, time was running out for the tiny territory. Neither Belgium nor Prussia (now within the German Empire) had ever surrendered its original claim to it. Around 1900 Germany in particular was taking a more aggressive stance towards the territory and was accused of sabotage and of obstructing the administrative process in order to force the issue.

The First World War brought about the end of neutrality. On August 4, 1914, Germany invaded Belgium, leaving Moresnet at first "an oasis in a desert of destruction".[10] In 1915, the territory was annexed by the Kingdom of Prussia, without international recognition.

In 1918, the Armistice between France and Germany, signed on November 11 at Compiègne, forced Germany to withdraw from Belgium and also from Moresnet.

On June 28, 1919, the Treaty of Versailles settled the dispute that had created the neutral territory a century earlier by awarding Neutral Moresnet, along with Prussian Moresnet and the German municipalities of Eupen and Malmedy, to Belgium,[11] thus permanently ending the status of a neutral territory. 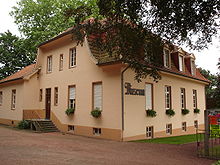 The territory was formally annexed by Belgium on January 10, 1920. To distinguish it from the already existing town of Moresnet, Neutral Moresnet was renamed Kelmis (in French: La Calamine) - after kelme, the local dialect word for zinc spar - while Prussian Moresnet was renamed Neu-Moresnet (New Moresnet).

After 1920, Moresnet shared the history of Eupen and Malmedy.[12] Germany briefly re-annexed the area during World War II, but it returned to Belgium in 1944. Since 1973, Kelmis forms part of the German-speaking Community of Belgium. In 1977, Kelmis absorbed the neighbouring communes of Neu-Moresnet and Hergenrath.

A small museum in Neu-Moresnet, the Göhltal Museum (Musée de la Vallée de la Gueule), includes exhibits on Neutral Moresnet. Of the 60 border markers for the territory, more than 50 are still standing.[13]

As a company, Vieille Montagne survived Neutral Moresnet. It branched out and after two centuries continues to exist as VM ZINC, a part of Union Minière, the latter renamed in 2001 as Umicore, a global materials company.[2]