Mike Gordon (born Michael Eliot Gordon June 3, 1965 in Sudbury, Massachusetts) is a bass guitar player and vocalist most noted for his work with the rock band Phish. Gordon is also an accomplished banjo player, and is proficient at piano, guitar, harmonica and percussion. He is also a filmmaker.

Gordon met Trey Anastasio, Jon Fishman and Jeff Holdsworth while attending college at University of Vermont, where the rock band Phish formed in 1983.

Musically, Gordon's influence is the most obvious in Phish's many different renditions of various bluegrass, calypso and even traditional Jewish songs (Gordon is Jewish). He also contributed by singing, as well as writing off-beat lyrics to amusing but thought-provoking songs.

Gordon played many roles in Phish. Until the band became too big for self-management, he dealt with practically all public relations and fan communication, such as answering fan mail, managing funds and booking gigs. Gordon wrote 19 original Phish songs and co-authored 22 additional Phish tracks. [2]

On August 11, 2003, Gordon was arrested following a performance by The Dead[1] and charged with child endangerment when he was found taking pictures of a nine-year-old girl. [2] A month later, Gordon was officially cleared of any wrongdoing.[3] In 2008, Gordon married Susan Schick, a Burlington lawyer. [4]

Like Phish guitarist Trey Anastasio, Gordon plays custom-made bass guitars built by Paul Languedoc. Gordon played two Languedoc bass guitars, including a "dragon" bass. These bass guitars employed custom wound pickups from Mørch guitars of Denmark. For Phish's March 1, 1997, show at Markthalle in Hamburg, Germany, he switched to a Modulus Quantum 5 bass guitar (similar to the Quantam 6 played by Phil Lesh) with two EMG DC pickups. He later acquired a TBX model which is the neck through version of the same guitar. Mike explains "The story of how I wound up with my neck-through Q5TBX bass is pretty funny. I read a BASS PLAYER article on Phil Lesh that mentioned how Modulus had made him a custom bass, and that they were working on one for me. So I called them up and said, “Hey, where’s my bass?” They took another year or two because it’s so hard for them to construct a neck-through instrument. They have to glue the graphite onto the wood. It gets messy, and the oven has to be really hot. They eventually finished mine." This instrument is known for deep tones and a "futuristic" sound, largely attributable to a unique construction including a neck that is made entirely of a lightweight, extremely robust carbon-graphite compound, not dissimilar to a material selected by NASA for use on the Space Shuttle. Gordon plays with a pick (Jerry Dunlop 1.5mm triangular graphite picks).[5]

Gordon has used a variety of amplifier and speaker combinations including the SWR SM-900 amp/Goliath 4x10" enclosure but lately[when?] has been playing through Eden WT-800 amps, a Meyer Sound CP-10 parametric EQ, and onward toward a Meyer Sound powered speaker system (two 750P 2x18 cabs and two UPA-1Ps with 12" low frequency drivers and 3" compression drivers).[7]

He has played banjo since 1994, performing the instrument in concert with Phish and Phil Lesh (albeit an electric banjo) and in the studio on the 2007 Bernie Worrell album Improvisczario. Gordon played an Inferno Bass during "Frankenstein" at the East Troy, Wisconsin, show on 21 June 2009. 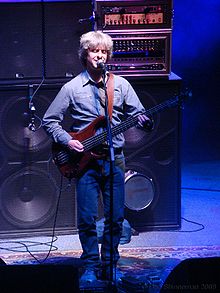 Gordon has played in several side-projects apart from Phish, including Grappa Boom with Jamie Masefield of the Jazz Mandolin Project, The Chieftains with Rosanne Cash, and Doug Perkins of Smokin' Grass. Gordon formed his own solo band featuring Josh Roseman, Scott Murawski, Julee Avallone, James Harvey, Gordon Stone, Jeannie Hill and Doug Belote in 2003 and released Inside In based loosely on his film Outside Out.

In early 2006, Gordon teamed up with his mother, artist Marjorie Minkin, to present Another Side of In — a visual and audio art show featuring interactive sculptures created by Minkin and set to the music of Inside In. The interactive show appeared at the Boston Children's Museum beginning in January 2010.

On January 2, 2007, Gordon appeared with a group billed as The House Band containing many former members of The Grateful Dead playing at a party in honor of the new leadership of the United States House of Representatives hosted by Nancy Pelosi. The group included Mickey Hart, Bill Kreutzmann, Bob Weir, Bruce Hornsby and Warren Haynes.

Gordon performed at a concert in Hawaii on September 21 with Kimock and Kreutzmann and, on November 2, appeared during the second set of a Ratdog concert at the Memorial Auditorium in Burlington, Vermont, joining the band on the songs "Stuff", "Bird Song" and "Cassidy". On January 5, Gordon again teamed with Kreutzmann and Scott Murawski in Jaco, Costa Rica, for a performance at Doce Lunas, playing a range of covers and originals including "Keep On Growing" "Estimated Prophet" "Twist" and "Intensified". After this showg, Gordon began a year-long retreat from public performance to focus his time on writing and recording a new album, and forming a new touring band.

He joined Trey Anastasio at the first annual Rothbury Music Festival in July during his solo acoustic set. Anastasio and Phish drummer Jon Fishman joined Gordon for part of his set the same day. Gordon released an album entitled The Green Sparrow on Rounder Records on August 5, 2008.

On March 6, 2009, Mike reunited with Phish] at the Hampton Coliseum. The band has toured regularly since Summer 2009.

Gordon finished writing and recording his next solo album, Moss, at his home studio in Vermont in May 2010. The album was released by Rounder Records on October 19.[8]

He explains that many of the songs on the new album "began as bass and drum jams" adding that it is "kind of bass-oriented. Not in that the bass is the lead, but that the rhythms and the patterns are bass centric. The uniqueness is centered on the bass. So the bass is the key instrument. On Inside In, the pedal steel is the key instrument and if you had to say it for Green Sparrow, maybe electric guitar. But this time it’s the bass."[9]

In 2004, Gordon performed with The Benevento-Russo Duo for several shows benefiting Headcount, a voter registration organization. The trio played a number of dates in late 2004 and 2005 including the Bonnaroo Music Festival in June 2005 and a New Year's Eve series of shows in Florida and the northeastern United States.

In summer 2006, Gordon, along with Phish bandmate Trey Anastasio, again joined the Benevento-Russo Duo for a co-headlining tour with Phil Lesh and Friends[10] before finishing the final leg of the tour on their own. The group performed various songs from each members' catalog, as well as a handful of brand new originals. The quartet parted ways after the tour ended in July.

Later in 2006, Gordon formed a honky-tonk band called Ramble Dove, consisting of himself, Brett Hughes, Neil Cleary, Marie Claire and Scott Murawski. The band came into fruition after Gordon's long-time stint as bass guitar player in a honky-tonk band led by Brett Hughes that performed each Tuesday night at the Burlington, Vermont, club, Radio Bean. The group performs a number of classic country songs and a few Gordon originals, such as "Ramble Dove", "Loosening Up The Rules" and the rare Phish song "Weekly Time".

Gordon completed a 25-date supporting tour across the US with this band in summer 2008 and a short four-night stint in December of that year. They ventured on a 22-date US tour on September 8, 2009, and again in March 2010.[11] On September 7, the band announced a 17-date November tour, from the 5th to the 27th of the month, with more than half of the dates completely sold out.

In January 2011, the band announced a 17-date March 2011 headlining club tour, including its first sold out double-header event at Brooklyn Bowl in Brooklyn, New York.[12] The band made its debut late night talk-show television appearance on February 11, as musical guests on Late Night with Jimmy Fallon, promoting Gordon's album Moss.[13] They will return to the road for a small handful of dates in New England (and one date in Albany) in November and December 2011.