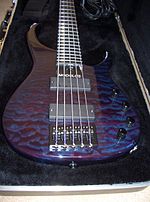 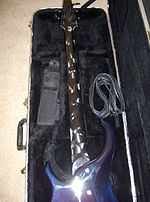 Modulus Guitars is an American manufacturer of musical instruments, most notably bass guitars built with carbon fiber necks. The company, originally called Modulus Graphite, was founded in part by Geoff Gould, a bassist who also worked for an aerospace company in Palo Alto, California.

The name may possibly be from Young's modulus, a measure of stiffness from solid mechanics. Carbon fiber has exceptionally high modulus.

Traditionally, electric guitar and bass necks are made from hardwoods (such as maple or mahogany) reinforced with an adjustable steel "truss rod." Wood, being a naturally occurring material, is prone to variations in density and flexibility. This, coupled with the high stresses created by stretching steel strings across them lengthwise, makes wood necks prone to certain unpredictable and undesirable qualities. Among these are twisting, incorrect "bowing" (either too pronounced or too subtle), and "dead spots," or areas on the neck where notes are quieter or more indistinct compared to other areas. Non-traditional neck materials such as carbon fiber and aluminum are attempts to correct these issues by replacing wood with lighter, stiffer components.

Gould was inspired to experiment with non-traditional materials after attending a 1974 Grateful Dead concert, at which he marveled at the size and complexity of Phil Lesh's heavily modified bass (customized by Alembic) and began to consider the possibilities of lighter, stronger materials. After being passed over by his employers in the aerospace industry, the project of creating hollow, carbon fiber bass necks was brought to fruition by Gould and Alembic, who built a bass with a prototype neck and displayed it at a trade show in 1977. Immediately after the trade show, the bass was purchased by Fleetwood Mac bassist John McVie.

Gould and some of his colleagues in the aerospace industry founded Modulus Graphite and began to make necks for Alembic and other companies before moving on to making entire instruments.