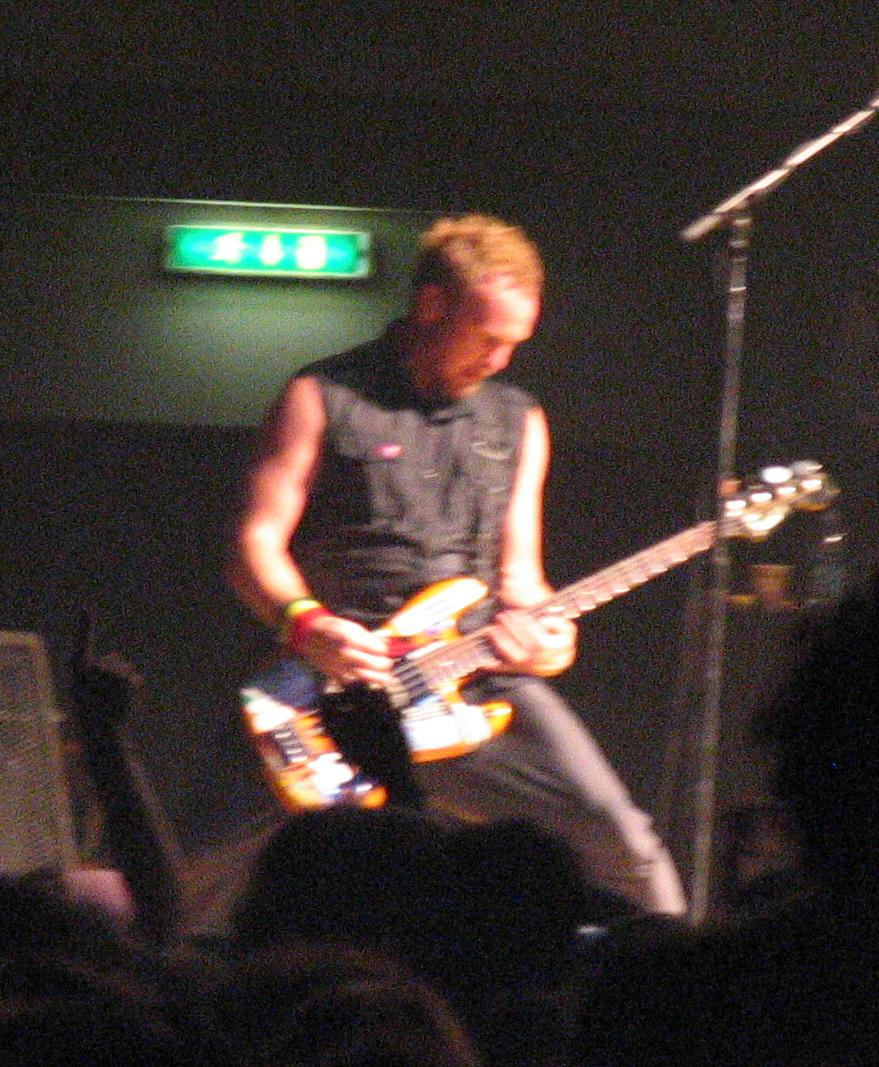 Jeffrey Allen Ament (born March 10, 1963 in Havre, ) is an American and . Along with , , and , he is one of the founding members of the American rock band . Ament is well known for his work in grunge rock bands based in through the 1980s prior to Pearl Jam, and is particularly notable for his work with the fretless bass, upright bass and twelve-string bass guitar.

He began playing the as a teenager, often playing along with , , and records. Ament participated in , football, and track at Big Sandy High School, from which he graduated in 1981. ["Interview with Jeff Ament, Bassist for Pearl Jam". digital-noise.net. May 25, 2003.] He then went on to college at the University of Montana in Missoula, where he studied art and played basketball. [ [http://www.theskyiscrape.com/faq/index.php#1.8 "The Sky I Scrape: Pearl Jam FAQ"] . theskyiscrape.com.] [Heaney, John. [http://www.missoulian.com/articles/2008/01/06/sports/sports05.txt "Meet: Jeff Ament: Pearl Jam's Ament Plays for Love of Game"] . "". January 6, 2008.] Ament quit college in the middle of his sophomore year after the university told him they were no longer going to continue its program.

Ament became acquainted with fellow Seattle musicians and Steve Turner, and he was asked to join their new band Green River in 1984. The band also included drummer Alex Vincent, with guitarist eventually being added to the line-up. By the time the band finished the recording of its debut EP, "", Turner decided to leave the group, citing his distaste with Ament and Gossard's heavy metal leanings.

Following Green River's dissolution, Ament established in 1988 along with former Green River members Gossard and Fairweather, former frontman , and former Ten Minute Warning and drummer . The band quickly worked on recording and performing locally and by late 1988 had become one of Seattle's more promising bands. In early 1989 the band signed to subsidiary . In March of that year the group issued its debut EP, "Shine".

In late 1989 the group returned to the studio to record its debut studio album, "Apple". It was planned for a March 1990 release. Only days before the release of "Apple", however, frontman Wood, who had a long history with drug problems, overdosed on . After spending a few days in the hospital in a , Wood died, effectively bringing Mother Love Bone to an end. "Apple" would see release later that year.

Following Wood's death, Ament and Gossard almost parted company, but eventually got back together along with a childhood friend of Gossard's named . The trio were attempting to form their own band when they were invited to be part of the project founded by Soundgarden's as a musical tribute to Andrew Wood. Cornell had been Wood's roommate. Ament described the collaboration as "a really good thing at the time" for him and Gossard that put them into a "band situation where we could play and make music."

The band started rehearsing songs written by Cornell on tour prior to Wood's death, as well as re-working some existing material from demos written by Gossard and Ament.

Pearl Jam was formed in 1990 by Ament, Gossard, and McCready,

Feeling the pressures of success, the band decided to decrease the level of promotion for its albums, including refusing to release music videos. [Ashare, Matt. "The Sweet Smell of (Moderate) Success". CMJ. July 2000.] "Ten years from now," Ament said, "I don't want people to remember our songs as videos." In 1994, the band began a much-publicized boycott of , which lasted for three years and limited the band's ability to tour in the United States. [DeRogatis, Jim. "Milk It!: Collected Musings on the Alternative Music Explosion of the 90's". Cambridge: Da Capo, 2003. ISBN 0-306-81271-1, pg. 58] Ament took an active role during Pearl Jam's dispute with Ticketmaster in 1994 over prices and surcharges. Along with Gossard, Ament testified before a congressional subcommittee, arguing that Ticketmaster's practices were anti-competitive. [Van Schagen, Sarah [http://www.grist.org/news/maindish/2006/07/21/vanschagen/ "Jam Session" - Interview with Stone Gossard] . www.grist.org. July 21, 2006.] Later that same year the band released its third studio album, "", which became the band's third straight album to reach multi-platinum status.

Following the firing of Abbruzzese in 1994, drummer joined the band. The band subsequently released "" in 1996 and "Yield" in 1998. The band once again changed drummers in 1998, with Irons leaving the band due to dissatisfaction with touring. [cite web | url=http://www.rollingstone.com/artists/pearljam/articles/story/5928493/off_he_goes | title=Off He Goes | accessdate=2007-06-28 | author=Fischer, Blair R | publisher="" | date=] Irons was replaced by former Soundgarden drummer Matt Cameron, who has been with the band ever since. In 1998, Pearl Jam recorded "", a cover of a 1960s ballad made famous by . It was first released on the band's 1998 fan club single; however, by popular demand, the cover was released to the general public as a single in 1999. "Last Kiss" peaked at number two on the "Billboard" charts and became the band's highest-charting single. In 2000, the band released its sixth studio album "Binaural" and initiated a successful and ongoing series of official bootlegs. In 2002, the band released its seventh studio album "Riot Act" and in 2006 the band released its eighth studio album, the eponymous "Pearl Jam". The band has begun preliminary work on its ninth studio album.

Aside from his musical contributions for the band, Ament has made significant contributions to the band's album artwork. His photography can be found throughout the majority of the band's releases.

Ament makes a major songwriting contribution to Pearl Jam. He penned the music for one of the band's biggest hits, "Jeremy", as well as "". His contributions to Pearl Jam's songs have not been limited to music with Ament having written the lyrics for the songs "Pilate", "Low Light", "Gods' Dice", "", "Help Help", "Other Side", and "Sweet Lew". As well as bass contributions, Ament has often provided backing vocals and has played guitar on two of the songs he had written musically: "Smile" ("") and "Bee Girl" ("Lost Dogs"). He performs lead vocal duties on "Sweet Lew" (from "Lost Dogs").

Ament performed with other members of Pearl Jam on 's 1995 album "Mirror Ball", and subsequently took part in an eleven-date tour of Europe as part of Young's backing band. This tour proved very successful with Young's manager Elliot Roberts calling it "One of the greatest tours we ever had in our whole lives." [McDonough, Jimmy. "Shakey: Neil Young's Biography", Anchor, 2003. ISBN 0-6797-5096-7 [http://www.thrasherswheat.org/jammin/pj.htm] ]

Ament had a brief acting cameo in the 1992 movie "Singles", along with Stone Gossard and Eddie Vedder of Pearl Jam. He appeared as himself, playing bass in lead actor 's backing band, Citizen Dick. [ [http://www.imdb.com/name/nm0024610/ "Jeff Ament"] . .] Most of Matt Dillon's wardrobe in the movie actually belonged to Ament. [ [http://www.ew.com/ew/article/0,,305806,00.html "Northwestern Exposure"] . "". March 5, 1993.] During the making of the film Ament produced a list of song titles for the fictional band.

With his brother Barry, Ament runs Ames Bros., an art production company that produces tour posters and album artwork for many bands, including Pearl Jam.

Ament currently lives in , , and Missoula, . Aside from music, Ament's interests include , , , , and . He was a fan and season ticket holder of the NBA's . Ament assisted in financing the construction of Missoula's Mobash Skatepark. [Woodhouse, Murphy. [http://www.mtinbusiness.com/inbiz-0710/bus05.php "Riding a vision to reality — Success of Mobash skatepark is the triumph of determination over inexperience"] . Western Montana InBusiness Monthly. October 2007.] He and his partner, Pandora, climbed Africa's in support of . [Kelley, Steve. [http://seattletimes.nwsource.com/html/traveloutdoors/2002009137_mtkilimanjaro22.html "From Malawi to the summit of Mount Kilimanjaro"] . "". August 20, 2004.]

Ament is a supporter of organic farmer and United States Senator . Tester grew up near Big Sandy and Ament knew of Tester before either were famous. Ament campaigned for Tester in 2006.