The Geography of Guyana comprises the physical characteristics of the country in Northern South America and part of Caribbean South America, bordering the North Atlantic Ocean, between Suriname and Venezuela, with a land area of approximately 214,970 square kilometres. The country is situated between 1 and 9 north latitude and between 56 and 62 west longitude. With a 430-kilometre Atlantic coastline on the northeast, Guyana is bounded by Venezuela on the west, Brazil on the west and south, and Suriname on the east. The land comprises three main geographical zones: the coastal plain, the white sand belt, and the interior highlands.

The coastal plain, which occupies about 5 percent of the country's area, is home to more than 90 percent of its inhabitants. The plain ranges from five to six kilometers wide and extends from the Courantyne River in the east to the Venezuelan border in the northwest.

The coastal plain is made up largely of alluvial mud swept out to sea by the Amazon River, carried north by ocean currents, and deposited on the Guyanese shores. A rich clay of great fertility, this mud overlays the white sands and clays formed from the erosion of the interior bedrock and carried seaward by the rivers of Guyana. Because much of the coastal plain floods at high tide, efforts to dam and drain this area have gone on since the 18th century.

Guyana has no well-defined shoreline or sandy beaches. Approaching the ocean, the land gradually loses elevation until it includes many areas of marsh and swamp. Seaward from the vegetation line is a region of mud flats, shallow brown water, and sandbars. Off New Amsterdam, these mud flats extend almost 25 kilometres (16 mi). The sandbars and shallow water are a major impediment to shipping, and incoming vessels must partially unload their cargoes offshore in order to reach the docks at Georgetown and New Amsterdam.

A line of swamps forms a barrier between the white sandy hills of the interior and the coastal plain. These swamps, formed when water was prevented from flowing onto coastal croplands by a series of dams, serve as reservoirs during periods of drought.

The white sand belt lies south of the coastal zone. This area is 150 to 250 kilometers wide and consists of low sandy hills interspersed with rocky outcroppings. The white sands support a dense hardwood forest. These sands cannot support crops, and if the trees are removed erosion is rapid and severe. Most of Guyana's reserves of bauxite, gold, and diamonds are found in this region.

The largest of Guyana's three geographical regions is the interior highlands, a series of plateaus, flat-topped mountains, and savannahs that extend from the white sand belt to the country's southern borders. The Pacaraima Mountains dominate the western part of the interior highlands. In this region are found some of the oldest sedimentary rocks in the Western Hemisphere. Mount Roraima, on the Venezuelan border, is part of the Pakaraima range and, at 2,762 meters, is Guyana's tallest peak. Farther south lies the Kaieteur Plateau, a broad, rocky area about 600 meters in elevation; the 1,000-meter high Kanuku Mountains; and the low Acarai Mountains situated on the southern border with Brazil.

Much of the interior highlands consist of grassland. The largest expanse of grassland, the Rupununi Savannah, covers about 15,000 square kilometers in southern Guyana. This savannah also extends far into Venezuela and Brazil. The part in Guyana is split into northern and southern regions by the Kanuku Mountains. The sparse grasses of the savannah in general support only grazing, although Amerindian groups cultivate a few areas along the Rupununi River and in the foothills of the Kanuku Mountains. 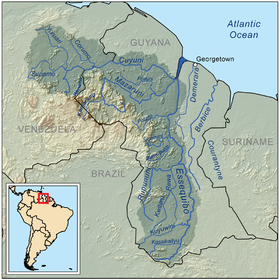 Map of the Essequibo drainage basin

Guyana is a water-rich country. Numerous rivers flow into the Atlantic Ocean, generally in a northward direction. A number of rivers in the western part of the country, however, flow eastward into the Essequibo River, draining the Kaieteur Plateau. The Essequibo, the country's major river, runs from the Brazilian border in the south to a wide delta west of Georgetown. The rivers of eastern Guyana cut across the coastal zone, making east-west travel difficult, but they also provide limited water access to the interior. Waterfalls generally limit water transport to the lower reaches of each river. Some of the waterfalls are spectacular; for example, Kaieteur Falls on the Potaro River drops 227 metres, more than four times the height of Niagara Falls.

Drainage throughout most of Guyana is poor and river flow sluggish because the average gradient of the main rivers is only one meter every five kilometers. Swamps and areas of periodic flooding are found in all but the mountainous regions, and all new land projects require extensive drainage networks before they are suitable for agricultural use. The average square kilometer on a sugar plantation, for example, has six kilometers of irrigation canals, eighteen kilometers of large drains, and eighteen kilometers of small drains. These canals occupy nearly one-eighth of the surface area of the average sugarcane field. Some of the larger estates have more than 550 kilometers of canals; Guyana itself has a total of more than 8,000 kilometers. Even Georgetown is below sea level and must depend on dikes for protection from the Demerara River and the Atlantic Ocean. 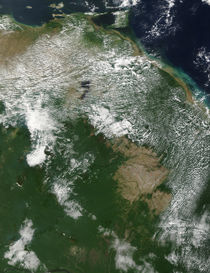 Lying near the equator, Guyana has a tropical climate, and temperatures do not vary much throughout the year. The year has two wet seasons, from December to early February and from late April to mid-August.

Although the temperature never gets dangerously high, the combination of heat and humidity can at times seem oppressive. The entire area is under the influence of the northeast trade winds, and during the midday and afternoon sea breezes bring relief to the coast. Guyana lies south of the path of Caribbean hurricanes and none is known to have hit the country.

Rainfall is heaviest in the northwest and lightest in the southeast and interior. Annual averages on the coast near the Venezuelan border are near 2,500 millimetres (98.4 in), farther east at New Amsterdam, between 2,000 and 1,500 millimetres (78.7 and 59.1 in) in southern Guyana's Rupununi Savannah. Areas on the northeast sides of mountains that catch the trade winds average as much as 3,500 millimetres (137.8 in) of precipitation annually. Although rain falls throughout the year, about 50 percent of the annual total arrives in the summer rainy season that extends from May to the end of July along the coast and from April through September farther inland. Coastal areas have a second rainy season from November through January. Rain generally falls in heavy afternoon showers or thunderstorms. Overcast days are rare; most days include four to eight hours of sunshine from morning through early afternoon. 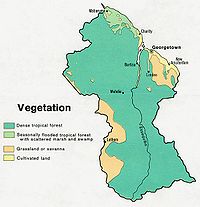