Kaieteur Falls is a great on the in central . It is located in
. It is 226 meters (741 ft) when measured from its plunge over a cliff to the first break. It then flows over a series of steep cascades that, when included in the measurements, bring the total height to 251 meters (822 ft). 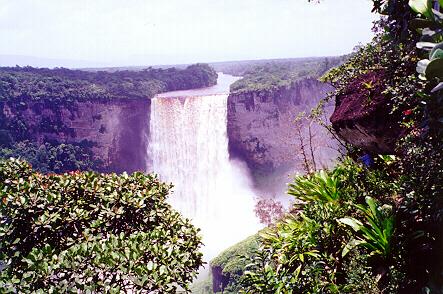 Kaieteur Falls is about five times higher than the more well known , located on the border between and the and about two times the height of the located on the border of and in . It is a single drop waterfall which is the 122nd tallest (single and multi-drop waterfall) in the world, according to the [http://www.world-waterfalls.com/database.php?pageNum_wwdSearch=3&totalRows_wwdSearch=437&s=N&t=H&orderby=singledrop&sortLimit=300 World Waterfalls Database] . The same web site lists it as 19th largest waterfall in terms of volume [http://www.world-waterfalls.com/database.php?s=N&t=W&orderby=avevolume&sortLimit=5000] , and in their estimation, Kaieteur is the 26th most scenic waterfall in the world [http://www.world-waterfalls.com/worldsbest.php?orderby=ratSce%20DESC] .

Its distinction lies in the unique combination of great height and large volume, averaging 663 cubic meters per second (23,400 cubic feet per second). Thus it is one of the most powerful waterfalls in the world, rivaling even the of 's state during the season.

Up river from the falls, the stretches out to the distant of the . The Potaro river empties in to the which is one the longest and widest rivers in South America.

On , , one of two British geologists appointed government surveyors to the colony of (Guyana), became the first European to see Kaieteur Falls. The other surveyor was . Brown and James Sawkins arrived in Georgetown in 1867 and did some of their mapping and preparation of geological reports together, some in separate expeditions, but Sawkins had taken a break from his work when Brown came upon Kaieteur. After completing their surveys of thousands of miles of interior rivers during the heady days of gold discoveries, the surveyors left British Guiana in 1871.

Brown’s book "Canoe and Camp life in British Guiana" was published in 1876. Two years later, in 1878, he published "Fifteen Thousand Miles on the Amazon and its tributaries".

According to a Indian legend, Kaieteur Falls was named for Kai, a chief, or who acted to save his people by paddling over the falls in an act of self-sacrifice to , the great spirit.

Kaieteur Falls is a major tourist attraction in Guyana. The falls is located in Kaieteur National Park and is in the centre of Guyana's rainforest. There are frequent flights between the falls' airstrip and and in Georgetown.

's 2004 documentary film "" focuses on , a British aeronautical engineer, who builds a teardrop-shaped airship in order to study the canopies of the rainforest. The film depicts both Dorrington's craft's first flights as well as the falls themselves and the that nest behind it.

In May 2006, trekked to the falls with five English novice explorers for his "Extreme Dreams" series. The programme was aired in September 2006 on the . The programme was criticised for trivialising local culture and over-playing the difficulty of the trek. It did help raise Guyana's international profile.

Each programme was prefaced with the statement that Kaieteur is the highest single-drop waterfall in the world, although the in Venezuela claim to be nearly four times higher. There are about 40,000 tourists a year.